Depressing news in the art world today. Curator Maura Reilly posted a "report card" on Facebook, a tally of art world statistics compiled by the anonymous feminist art collective Pussy Galore, counting up the women artists represented at New York's top art galleries. She juxtaposed the image alongside Guerrilla Girls' 1986 report card, and, though there have been improvements over the past 29 years, the numbers are still pretty grim. 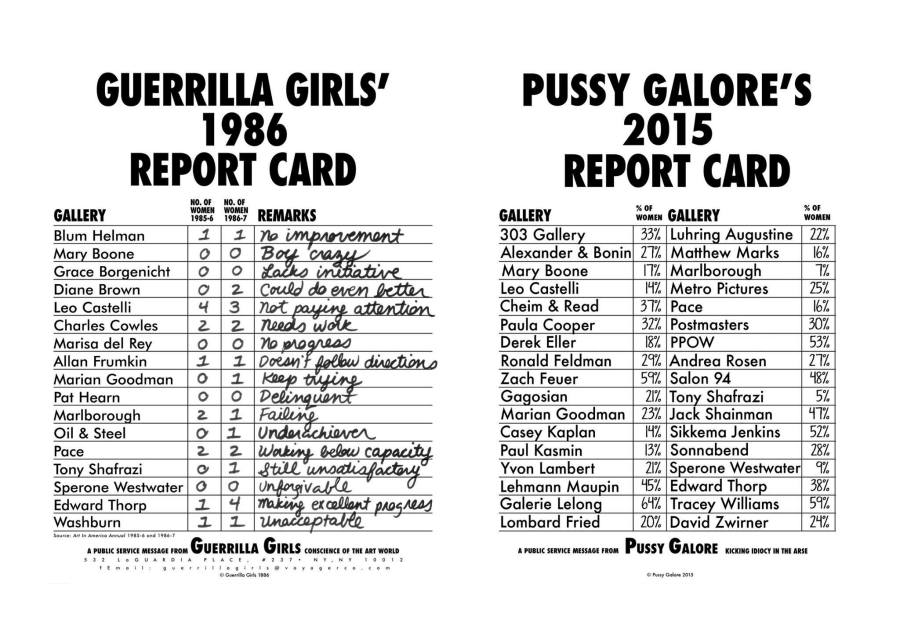 As Hyperallergic points out, only five of the listed galleries out of the 34 listed have rosters that rise above 50 percent women, although many have shown improvement since 1986 -- namely Mary Boone Gallery, Marian Goodman Gallery and Jack Shainman Gallery, whose percentage of women artists more than doubled from 20 percent to 47 percent.

Pussy Galore, the anonymous international artist collective made up of artists, curators, critics, collectors, educators, and writers, explained their foremost goal to Hyperallergic. "We have a one-point mission! Though there is great racial/geographic/sexual diversity within the group, we consider tackling gender inequality our primary issue." If this report card is any indication, we still have a long way to go.