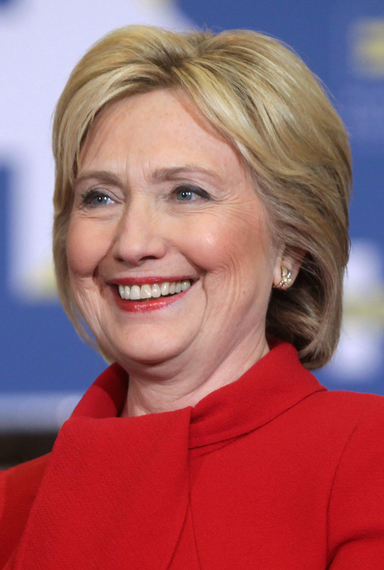 It has been a bizarre election year. Donald Trump is poised to become the Republican's presidential nominee despite his blatant sexist and racist rhetoric and weird obsession with Fox News reporter, Megyn Kelly. Meanwhile, on the other side of the political aisle, history is being made with Hillary Clinton becoming the first woman ever to come within striking distance of a presidential nomination. Big primary wins last week were a major step forward for Hillary but pundits, instead of acknowledging this accomplishment, told her to smile and commented on her "shrill" voice.

As sexism reared its ugly head in this last week's news cycle, on Meet the Press the roundtable delved into how gender might play into a Clinton v. Trump showdown. Although journalists expressed that mudslinging around gender would not be tolerated in a general election season, I'm not so optimistic.

As the saying goes, the more things change, the more they stay the same. This is true for sexism in politics (and other realms) and although not as blatant today, this is one of those things which has been around for an eternity and an insidious "ism" that is persistent in our world.

"Sexism, unlike in the 1950's, has become more subversive in its nature. Most folks are not comfortable making overtly sexist statements about others, rather, they rely upon suggestive language," said Jeremy T. Goldbach, Ph.D., LMSW, Assistant Professor, University of Southern California School of Social Work and author of the Diversity Workshop: A Guide to Discussing Identity, Power and Privilege. In order to decipher whether the language being used is sexist, Goldbach suggests approaching it through the lens of whether someone would be willing to use the same language when describing a man who holds similar opinions.

There are other female politicians who have faced sexism. In 2008, Sarah Palin was criticized for accepting the vice presidential nomination while she had a young son with special needs at home. Donald Trump earlier this year famously mocked Carly Fiorina's appearance. You can go back even further in history to find other examples.

The similarities between these First Ladies has been well-written about in news articles and books. Both were given prominent public roles in their husband's administrations. Eleanor was the eyes and ears of Franklin and toured the country to report back on public work projects and visited the most poverty stricken areas of our country during the Great Depression. Hillary was handed the task of leading healthcare reform and Bill was famously quoted saying, "When you elect me, you get 'two for the price of one.'"

Both First Ladies have had a major impact on world politics with Eleanor's work as an appointed delegate to the United Nations and drafting the Universal Declaration of Human Rights and Hillary's roles as U.S. Senator and Secretary of State. The parallels in their personal relationships and personas are also eerily similar with their husbands' extramarital affairs, their workhorse approach to their jobs and their aloof styles, which was the opposite their husbands' larger than life personalities.

Eleanor and Hillary were vilified for their outspoken roles and mocked for their appearance, which suggests sexism. Critics of Eleanor Roosevelt once said she should stay home with her husband and a 1940 campaign button circulated that said, "We Don't Want Eleanor Either." It's striking that today we remember Eleanor Roosevelt as a pioneer and revered as an American icon. This view may only be possible because the passage of time has softened harsh memories. Hillary will hopefully be remembered for breaking the mold of presidential politics and for things such as her 1995 speech at the United Nations Fourth World Congress on Women in Beijing declaring human rights are women's rights, and women's rights are human rights.

Love them or hated them, Hillary, Eleanor, and other women who run for elected office or hold an appointed government position, change everything by their mere presence and tenacity. Hillary breaking the glass ceiling to the oval office is something to be celebrated not smeared with sexism. Our complicity in addressing this issue does everyone a disservice.