In recent days, a new term has suddenly appeared in the media to describe a supposedly Arab cultural practice: "taharrush gamea." The term, which is misspelled (the second word should read gama'ei), just means "group harassment" in Arabic, but right-wing commentators are trying their hardest to convince you that it actually means "sexual assault by a bunch of Arab men" or "gang-rape game" and that it's a normal thing in the Arab World.

They're wrong, of course, on all fronts. But the invention of the term and the sudden currency it has gained in the mainstream Western media tells a darker tale of how xenophobic right-wing groups in Europe have cynically used reports of sexual violence against women to further a deeply racist, anti-refugee agenda.

The story begins on New Year's Eve, when groups of men standing outside the central train station in the German city of Cologne began harassing and mugging women, groping and sexually assaulting many in the process. Crowds of men, many of whom were reportedly drunk or on drugs, shot off fireworks at each other and some also gathered around and robbed and groped women. The entire time, hundreds of police stood by while doing little to stop the crowds, until eventually they just cleared the square entirely.

In the days that followed, reports emerged that similar scenes had unfolded on a much smaller scale in Hamburg and a few other towns. Victims of the attacks reported that the men taking part were primarily of "Arab or North African" appearance. In total, so far 766 people filed crime reports with police about incidents that are said to have occurred in connection to that night, of which around 381 - less than half - described sexual assault. The majority of reported crimes involved only theft.

For days, Cologne police failed to publicize what had happened, but soon after New Year the scope of the incidents surfaced. The justice minister called the attacks, which involved the participation of dozens of men and in some cases appear to have been coordinated, a "new dimension of organized criminality." The police said that the groups were probably linked to criminal gangs that hang out around the country's train stations, and mentioned that the incidents were similar to "antänzer," a German word for "waltzing," which refers to a common form of mugging whereby the attacker quickly moves around you in order to distract and then rob you.

But in the aftermath of the violence, commentators speculated that the local police had failed to publicize the incidents for fear that it could provoke a xenophobic backlash against the more than 1 million refugees who have been offered safety in Germany in recent months, amid an unprecedented refugee crisis flowing from the Middle East into Europe.

And just as expected, as news filtered out, right-wing commentators and activists went into attack mode, blaming the government for allowing refugees into the country. Right-wing gangs began attacking men who happened to be of Arab or North African appearance, and thousands massed for anti-refugee rallies across the country. One protester in Leipzig even said that the attacks were "in principle bad for the women, but good for us, because the people are being woken up."

The racist violence was accompanied by a rapid shift in language; while at first the incidents were seen as episodes of criminality involving sexual harassment, assault, and theft, within days a new phrase emerged: "taharrush gamea." In their report on the violence, Cologne police took an Arabic phrase that translates directly to "group harassment," garbled its pronunciation, and then described it as a "modus operandi" in the Arab world.

Unsurprisingly, the use of an Arabic phrase to describe what was now being thought of as a supposedly Arabic cultural phenomenon spurred commentators across the political spectrum to begin speculating how Arabs had brought it there.

To those who have followed the issue of sexual harassment in the Arab world, the sudden appearance of "taharrush gamea" in German or English is bizarre. As I mentioned above, the term has perfectly suitable equivalents in other languages, to describe an issue that unfortunately occurs all over the world: sexual harassment. Germans have only to look at Oktoberfest (where the sexual violence is so bad they've had to set up "sanctuaries" for women) or other mass drunken gatherings to remember that, unfortunately, misogynistic men from many different cultural backgrounds engage in sexual harassment.

In Egypt, where the phenomenon supposedly originates, mass sexual harassment is just as shocking to average people as it is anywhere else. The first recorded instance of mass sexual harassment was by police and pro-government thugs at a protest in 2005, and since then it has re-appeared a handful of times, notably in Tahrir Square after the January 25 Revolution.

That is not to say that sexual harassment or sexism in general are not major problems in Egypt or in other parts of the Arab World. They definitely are, and feminist groups there have for years been confronting the troubling violence women face in many aspects of their lives.

But "taharrush gamea" is by no means a common practice in Egypt nor anywhere else in the Arab World. It is not surprising that right-wing commentators in the West quickly adopted the explanation that mass sexual harassment was part of Arabic culture; what is worrying is that respectable outlets like the Wall Street Journal have started parroting the same language. 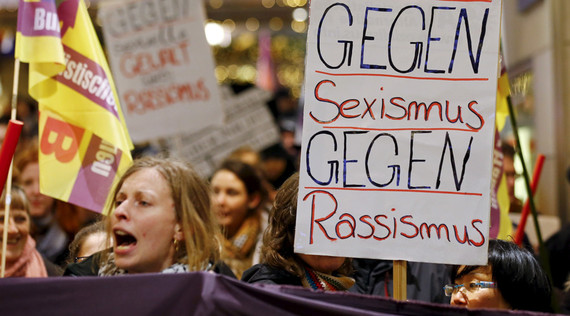 A poster reading "Against Sexism, Against Racism" as protesters march through Cologne, Germany on Jan. 5, 2016 (Reuters/Wolfgang Rattay)

One egregious example is a recent article in which prominent German academic Josef Joffe not only mistakenly equates "Arab or North African" with "Muslim," he also argues that,

Young Christian males also don't always obey Miss Manners when traveling in packs. But their culture doesn't have a word for taharrush gamea, as practiced in some Arab lands: a group-grope where young men encircle women to jeer, molest and rob them.

Of course their culture has a word for "taharrush gamea": the word is "group harassment. But rendering the term in Arabic makes it scarier and more exotic, suggesting it is part of a timeless, unchanging Arab culture. And by ascribing the phenomenon to that culture, the author is implying that white men don't sexually harass women in groups or engage in gang-rape - a conclusion which is patently untrue.

Sexism is not an imported product. Until 1997, under German law men could legally rape their wives, and even today less than 10% of rape trials end in convictions. Sexual assault statistics themselves are notoriously unreliable, as the vast majority of victims do not report their attackers. But a 2013 global survey estimated that one in three women around the world will face sexual violence in their lives. For the "Eastern Mediterranean," that figure was just above 36%, while for "high-income countries" like Germany it was nearly 33%.

In the United States, for comparison, government surveys report around 50% of women have suffered some form of sexual victimization and around 20% have experienced rape. One-fifth of women who attend college report being sexually assaulted during those four years of their lives alone.

The fact that so many commentators are focusing on a supposedly cultural dimension to the Cologne violence highlights the growing fear that the moral outrage is guided more by racism against refugees than concern for women. Authorities have suggested that asylum-seekers who commit sex crimes will be deported; but what of German citizens who commit such crimes? Why should a refugee who robbed a woman at a train station be deported, and the German man who sexually assaulted and murdered a 4-year-old refugee boy stay? How does deportation address the root of the problem? 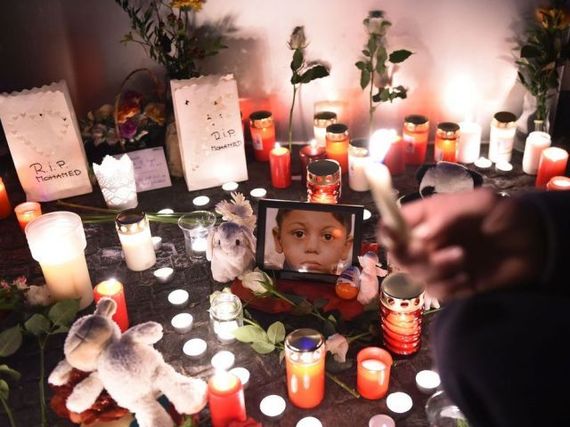 We should definitely be concerned about women's safety, there is no question about it. We must demand that German police deal with individuals accused of sexual assault - all of them, of whatever background - in a way that prioritizes women's voices and right to the public sphere.

But it's possible to demand women's safety and not get sucked into racist explanations that blame "Arab culture" instead of asking larger questions about why men feel entitled to women's bodies in public and why the police failed to take seriously women's concerns that night. Why didn't the police stop the crowds that night? Why do police see large groups of drunk men harassing women as normal or non-exceptional? What norms exist in the local police force in Cologne that even when women were being assaulted in front of them, it did not occur to the police to stop them?

But this is not just about the police. It's about the way society treats sexual violence, and when it decides to care. We need to discuss the roots of sexual violence and the reasons men feel that they have control over women's bodies, and address the structures of patriarchy and rape culture that have made sexual harassment on the streets, at school, at the office, and at home so common for so many millions of women. This mean interrogating both what attitudes in the families of asylum-seekers make violence against women acceptable as well as what attitudes in the families of white Germans make violence against women acceptable.

We need to take sexual violence of all forms seriously, and not just when the attackers are of foreign background. Adopting foreign terms like "taharrush gamea" won't erase the reality of how endemic sexual violence is to our own culture as well. No amount of xenophobia or Islamophobia will erase that fact.

Alex Shams is an Iranian-American writer and a PhD student of Anthropology at the University of Chicago.