"His" and "hers" products may run the gamut from bathroom sinks to Halloween costumes, but we've never seen anything quite like this before.

According to Germany's The Local, German supermarket chain Edeka is selling separate "male" and "female" bratwurst, inciting an outcry from some who are calling the sausages sexist. While the male version is advertised as "hearty" and "strong-spiced," the female bratwurst is labeled "lean." 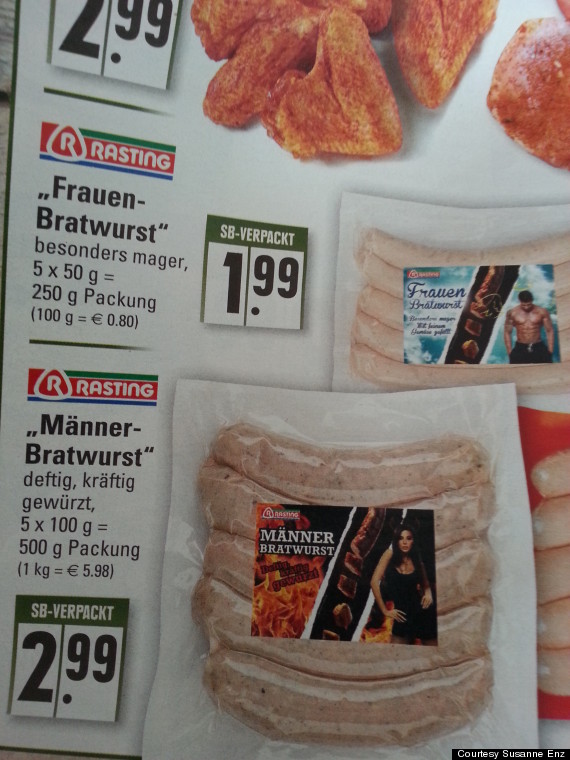 However, it appears, the meat manufacturer, Rasting, may also be to blame for the seemingly sexist product labels.

The male-female varietals were brought to light this week by Antje Schrupp, a Frankfurt-based journalist and political scientist. On her blog, Schrupp shared a photo of the supermarket chain's advertisement along with a letter from a concerned female consumer who wrote to the head honchoes of Rasting and the Edeka group.

In her response, Susanne Enz notes that the sausages' marketing show a "dull sexism."

"Men eat a lot and heartily, while women want to be thin above anything else -- these assumptions about gender-specific characteristics ring through," she writes. "Men are like this, women are like that. The differences are chiseled in stone. Women should please, men should enjoy. A hierarchal casting in favor of men is prominently inscribed in it."

Enz continues her carefully worded response, questioning why the company thought it prudent to include gender roles at all.

"Moreover, if women actually liked lean sausages with vegetable filling so much, then they would also purchase them when they're not marked 'for women.' By gender naming they are operating in the normative: They decide that liking the sausage, along with favoring lean products, is a characteristic of womanhood," she writes.

Enz explained in an email to The Huffington Post that she wrote to the CEOs of the two companies because she wanted to express her opinion after coming across the "male" and "female" bratwurst in her Saturday morning newspaper's ad inserts last weekend.

"I instantly found the [advertisement] quite unbearable in its dull sexism, took the picture and sent it to my girlfriend," Enz recalled. "When she saw it, she got really angry. So I said to myself: If these sausage-sexists make my girlfriend angry, I will not just accept that."

Enz said she has already received responses from representatives for both companies. Rasting CEO Ralf Poéll addressed the difference in price -- the "female" bratwurst contains vegetables that cost more to produce -- and the Edeka rep merely referred Enz to the customer service system. However, she said neither addressed the issue of gender naming in the product marketing.

The Huffington Post reached out to Rasting and Edeka but did not receive an immediate response from either company.

What do you think about the "male" and "female" bratwursts? Tell us below!