About a year ago, I Twitter-met Tyler, a man who works as an escort. He'd retweet my jokes, and I'd be turned on by his very public displays of sexual freedom. I'm a sexual innocent -- sex has always been more of a picture frame to the artwork of my life, rather than the other way around. So imagine my happiness/ surprise/ confusion when I saw my retweets with this guy developing into a little online "relationship." We had mutual friends, too. Only in New York does one have mutual friends with prostitutes. Well, maybe Washington, D.C. as well. I even once thought I recognized him on the subway. I got so nervous. Would he be offended if I went up and introduced myself? What would I say? Love your work? After this potential spotting, my interest in him grew. Coincidentally, so did my interest in the film Pretty Woman.

I'm calling Tyler an escort because this is how he describes himself, even though the politically correct term is sex worker. The casualness to his profession was part of what I initially found so appealing. "If you can't laugh at yourself..." type attitude, though having seen his nude pics, I can guarantee nobody is laughing. Even though he has a relaxed attitude about what he does, his professionalism is impressive. He's focused more on brand than just turning a trick (as they say in the biz). And unlike Miss Roberts, Tyler is meeting his Richard Geres online with a glossy website and top notch recommendations on many adult websites. If he could get a listing on Yelp, I guarantee you he would be one of New York's top spots (and good for groups).

Our tweets became texts and then eventually sexts. When you think about it, sexting really is the 21st century way of sending flowers. Start cute, build your way up to like, whoa, this is getting sexy. First a picture, just get it out in the open like a solitary red rose stating your intentions. "This is my junk, I intend for you to see it." Then move on to words, describing what would happen moment by moment. Eventually you'll either climax or lose interest and go to sleep. Or, in some isolated cases, lose a race to be the next mayor of New York City (Full disclosure: I worked on Anthony Weiner's campaign in 2005. Further full disclosure: he has never sexted me... yet).

TYLER: I feel like I need a cigarette after our texts last night.
ME: I feel like I need to talk to my therapist.
TYLER: Sexting can be very therapeutic.
ME: What are you wearing?
TYLER: Sexy underwear. You?
ME: Khakis. But they're very tight khakis. You can even see my underwear line if you look closely.
TYLER: What kind of underwear?
ME: I don't know, they're from Target. The kind that come five in a pack for $10.
TYLER: This isn't sexy.
ME: Saving money is always sexy.

Our sexting continued when I moved to Los Angeles. It was a bi-coastal, virtual, sexy-time relationship, based on naughty texts and witty banter. I enjoyed it immensely, appreciated his mind and the pics, and in a small way was beginning to feel more sexually free and liberated. I'm texting with an escort. Let freedom ring! 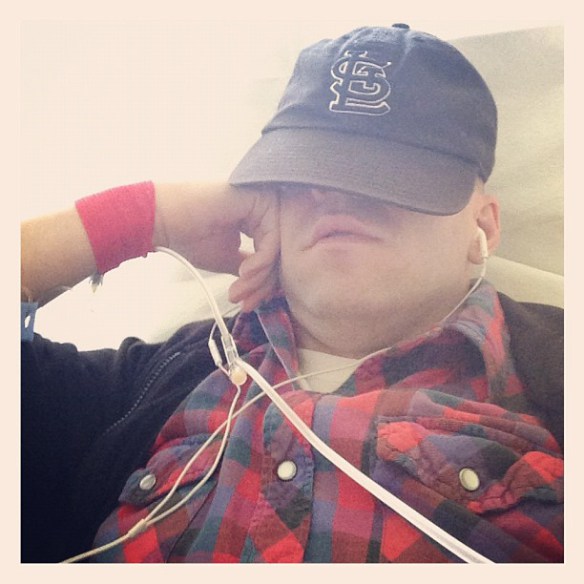 It was while I was feeling so free that I learned what my next life milestone would be: getting cancer. Hours after my diagnosis, I got a sext from him. I contemplated ignoring him forever. I didn't know what was coming my way, and I didn't want to burden our world with a sexting obligation that -- given my whole cancer diagnosis thing -- just wasn't going be on the front burner of importance in my life. Still, we did have a connection. We'd communicated on a near daily basis for months. I just couldn't pull a "Text me sometime" and disappear forever. I owed it to him to be honest, he deserved an update.

ME: I can't really talk right now. Still taking care of stuff. But it did turn out to be testicular cancer. The surgery is on Friday. I'm having trouble telling people, it's easier over text. Sorry!! xoxo
TYLER: Oh Scotty. I'm sorry. Talk when you can. And please say if I can do anything. Anything!
ME: :-) help me think of a tweet for this
TYLER: "@Livestrong is confiscating one of my balls for science! BRB!"
ME: lol
TYLER: I'm not trying to make myself a priority here. Just letting you know. I'm here for you.
ME: <3

He continued to text me back, and I texted him. Had I somehow managed to make an emotional connection with this escort (that I had never seen in real life, remember)? Yep, looked like it. It was a connection that I would soon find I needed as a distraction from my own reality -- from my own cancer. While my outside world became all about surviving, on my phone was this mini-world of affection and, I don't know, maybe even love? I was connecting -- via sexts! -- with this handsome, kind man, a man who just happened to be professionally qualified to connect with other men. In the middle of something as draining as chemotherapy, you're not as concerned with big picture questions. You just aim at keeping your food down that day, and don't bother questioning the authenticity of relationships. Turns out I didn't need to question it.

Chemo had started to make me feel sexually repulsed. I felt like this asexual disease container. I enjoyed the attention from Tyler, but I couldn't reciprocate. It was as if I was losing another part of my identity -- chemo takes away so much more than your hair -- all because of cancer. Something I had no control over.

Despite my complete loss of sexiness, our communication didn't stop -- it blossomed. The "sex" part of our sexting was just one part of what was really going on. We were expressing our mutual interest and admiration for one another, all disguised as sexts. Stripped of that option, we were able to appreciate each other on a different level, creating a virtual relationship-relationship. One that I needed to get me through the day. I didn't view him as "Tyler the escort" anymore. He became, in those couple weeks when I first began chemo, my friend thousands of miles away, just texting me whatever was on his mind. It was usually completely banal, everyday stuff, but there was something about the banality of our conversations that made me realize that I needed him.

I finished my cycles of chemo. He's still an escort. I'm beginning my post-treatment life now. In a "perfect" world, I'd be telling you that I rescued him *SPOILER ALERT* like Richard Gere did when he realized Julia Roberts was a lady behind that blond wig, but *NO SPOILER ALERT* this is the real world and he's not a lady (I have the pics to prove it). Could there be something more between us? Sure. But that's not the point. His presence during chemotherapy contributed to the success of my recovery. Because of him, I recognized my needs -- emotionally and *sextually*--and more importantly he opened up this awesome safe place to express those needs, and see them reciprocated. Do I wish it wouldn't have taken an experience like cancer to get me to realize that to be sexually available I need to be honest with my feelings and what I want? YES. Still, sexting with an escort during my cancer treatment did give me a little bit of a life epiphany, and there ain't nothin' wrong with that. Am I still sexually innocent? Oh yeah. But I'd replace "innocent" with "honest" because sexuality isn't a trial. There's no judgment. I just had to break some rules to find that out.

H. Alan Scott is a writer and comedian based in New York City and Los Angeles. This post first appeared on Thought Catalog.