For some spiders and the praying mantis, mating is a deadly game, with the pipsqueak males often sacrificing themselves in the name of sex. How a male decides which leggy lady is worth his life, and how the female decides whether to scarf him down, is complicated, two new studies show.

This Russian roulette mating strategy is called "sexual cannibalism." The females in species that practice sexual cannibalism sometimes eat their male partners after, or even during, sex. The drivers of this unusual phenomenon are still up in the air, though new research is shedding light on the dynamics between male and female that may leave one of them dead.

"You can see it in the approach behavior of the male," said William Brown, an associate professor at the State University of New York in Fredonia and lead researcher on a study about sexual cannibalism in the praying mantis. "There's this conflict between mating and surviving. He's taking this slow, cautious approach, because she is a huge threat to his future offspring." 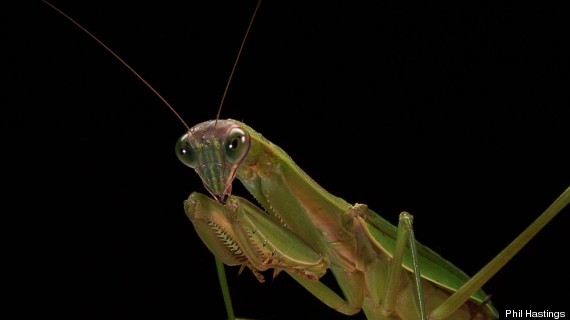 Praying for a mate

In Brown's study of the praying mantis, the factors driving sex and death may just come down to the male's hunger for sex and the female's actual hunger. Tenodera sinensis is a 6-inch (15.24-centimeter)-long praying mantis found throughout North America, including upstate New York, where Brown collected his participants for the study, published today (April 25) in the journal PLoS ONE.

For these big insects, sex leads to death about 16 percent of the time in the wild. To find out how availability of food and other mates affected this number, for five days Brown either fed or starved the females, and either mated the males daily, or kept them lonely. [Top 10 Swingers of the Animal Kingdom]

His team found the females are way more dangerous when they are hungry, but males during a dry spell are willing to take the risk: they approached the female closer and were more likely to initiate mating when sex starved, even if the female was dangerous. (Males can somehow sense when a female is extra hungry, and therefore more likely to eat him, Brown said.)

In the wild, it seems the females are always on the verge of starvation, the researchers said. Because these insects are so large, the males are one of the best sources of nutrition out there — a much more filling meal than a couple of crickets. The female's sexual cannibalism in this case could just be her inability to turn down such a luscious snack.

The sex life of the orb-web spider is a different story.

The males of these spiders are almost always eaten by the females, which are usually much larger. In response, the males use their two "pedipalps" as detachable penises. These organs break off inside the female, forming a plug.

The males can use both pedipalps on one female, or spread his bet across two lucky ladies. After their second pedipalp breaks off, the males sacrifice themselves to the female.

In a study published today (April 25) in the journal Frontiers of Zoology, graduate student Klass Welke at the University of Hamburg in Germany and his colleagues watched a wild group of the wasp spiders (a type of orb-web spider), Argiope bruennichi, for a mating season. By documenting the spider's sexual misadventures, the researchers found that about half chose to mate with one female, while the other half went for a double dip. [Top 10 Monogamous Animals]

The males stuck with one female if she was big and a virgin. The bigger a female is, the more fertile she is, and if she is a virgin, the male has a better chance of fertilizing the majority of her eggs. If a male did mate twice, he often traded up to a heavier female, the researchers said. 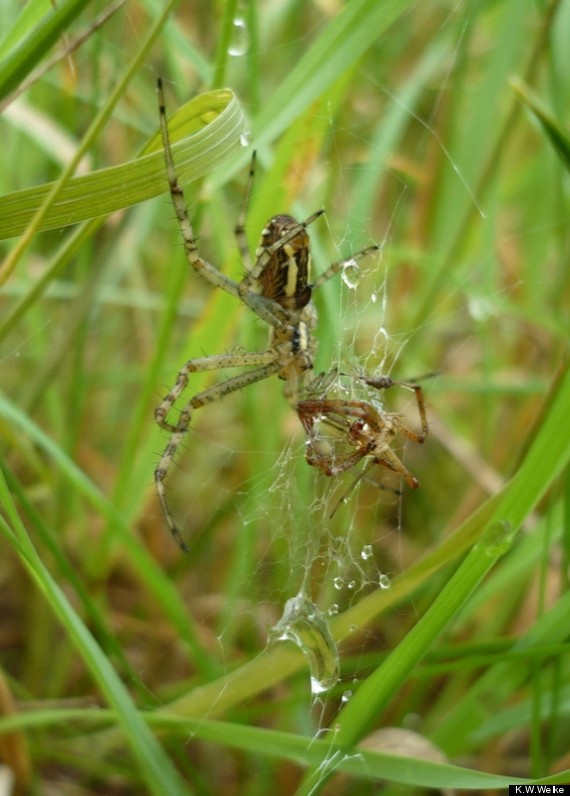 Interestingly, the number of available female spiders and the amount of male competition didn't seem to affect their mate choice, as it did with the praying mantis.

"They are able to sense how many females are in the field due to pheromones, so we expected them to adjust their decision based on local availability of females," Welke told LiveScience. "We found a change in the sex ratio during the season, but this wasn't linked to the male mating decision."

It seems what's most important to the male spiders is being able to find a female that's the best for them in this situation, not just any given female, Welke said. That increases the likelihood they would father her offspring, given he has only two chances. To give those kids their best chance, he sacrifices himself to the female, though the nutritional value of the male spider is debated.

Brown thinks the cannibalistic attitude of the female is likely an offshoot of their predatory instincts: "This is happening in species that are very predatory — spiders and preying mantis," Brown said. "It may be just an expression of this natural predatory behavior. There is strong selection on their predator behaviors and it spills over to its mating context."

Advertisement
Copyright 2012 LiveScience, a TechMediaNetwork company. All rights reserved. This material may not be published, broadcast, rewritten or redistributed.
Go To Homepage