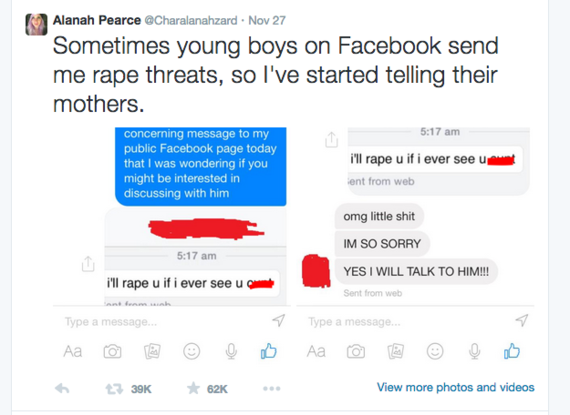 Alanah Pearce, a 21-year-old game reviewer from Brisbane, Australia, has had more than her share of online hate, including rape threats. But, she told Alternet about her plan for dealing with her young harassers.

I only realized quite recently that the majority of sexually explicit comments or messages I get come from young boys, not adult men, as I had assumed ... This basically means there's a different set of rules. I'm unlikely to be able to rationally discuss the harmful nature of online harassment with a young boy, but it also means they're probably naive and can learn from the experience. So, I thought about it, and the obvious solution was to try to find their family, via Facebook, and ask that they address the issue.

"Rape threats online are just the digital version of pervasive street harassment," said Soroya Chemaly, a blogger and activist on issues regarding gender, hate crimes and misogyny. She added that "It seems to me that boys behaving this way is only more apparent because of the nature of the Internet."

Alanah discovered that, in some cases, she could find the young man's mother's contact information by reviewing their Facebook profile. As the above tweet demonstrates, she's had at least one successful case where the mom has agreed to speak with her son.

This is a novel approach to dealing with young trolls that might work in some cases. Of course, it requires first being able to identify the harasser, which isn't always possible, and also being able to track down his mother. And it assumes that his mom will have a chat with him and that it will have an impact. There are a lot of "ifs" to this equation but it's not a bad idea.

It also illustrates another point. Sexual harassment often starts at an early age and -- for young men engaged in that activity -- there are intervention strategies that can sometimes help re-direct and rehabilitate the young man. While sexual harassment, including rape threats, is never OK, one should not assume that the person committing the harassment is beyond redemption, especially if they are young.

This type of harassment is a form of cyberbullying and, like all serious cases of bullying, we should have zero tolerance for the bad behavior but not necessarily towards those who are behaving badly. While contacting one's mother may not be possible or effective in all cases, it's just one of many approaches to try to reach those who are acting out. It won't work every time and -- as impressive as Alanah's actions are -- it's not the victim's responsibility to reach out, but it is the responsibility of others to do what we can to intervene whenever possible.

And, speaking of intervention, men and boys have a special responsibility to be good role models and speak with our fellow males about appropriate online behavior. Women and girls have a right to use the Internet and express themselves without fear or intimidation and it's up to all of us to create a comfortable climate for everyone, regardless of who they are.