In nearly 80 countries, identifying with a minority sexual orientation is illegal. Only a small number of countries, fewer than 20 percent, have implemented employment anti-discrimination laws to protect gay and lesbian employees. For these countries, Australia, Canada, the U.S., and the EU, the labor market implications of minority sexual orientations have been analyzed. According to an IZA World of Labor study by Nick Drydakis from Anglia Ruskin University, this evidence suggests half of gay and lesbian employees do not reveal their sexual orientation in the workplace for fear of discrimination and harassment as well as negative consequences for their employment and career. 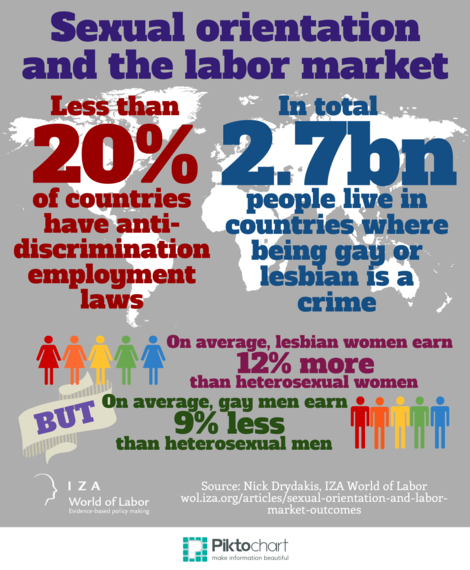 Gay men are found to earn 4-5 percent less than heterosexual men with the same skillset in the Netherlands, France, Greece, the UK and even 12-16 percent less in Canada, Sweden, and the U.S. A recent study by Mark Wooden at the University of Melbourne and Joseph Sabia from San Diego State University show that in Australia gay employees earn 20 percent less. The study shows that this is partly due to the fact that their wages grow much slower than those of heterosexual males. Nick Drydakis points out that firms clearly discriminate against gay men and the resulting wage penalty directly depends on how strongly firms are biased against gay men. These pay gaps are even larger for those living with a partner and thereby, more likely to be observably gay by their employers.

For lesbians, the implications are less clear and vary by countries as well as by study. According to the IZA World of Labor study in Canada and the U.S., lesbians earn 15-20 percent more than their heterosexual counterparts. But for other countries as Greece and Australia this study finds wage penalties up to 28 percent. Earlier results by Kitt Carpenter from Vanderbilt University confirm wage premia in Canada and wage penalties in Australia. In contrast, the recent Melbourne University study by Wodden and Sabia reports 33 percent higher wages for lesbians in Australia. All authors suggest that the wage premia may result from the fact that lesbians work on average more hours than heterosexual women; for example, in Australia they work up to 20 percent more. Lesbian women often do not follow traditional gender-based household roles and have less children than their heterosexual counterparts. As a consequence they may make different career decisions such as investing more in education, working longer hours and choosing more male-dominated occupations. Also, for lesbians in Australia the wage differential is widened if they have a "visible" partner but in this case it goes into the other direction, they get a higher premium.

These findings imply that legislative protection constitutes only a small step toward improving the employment circumstances and general well-being of people with a minority sexual orientation. This clearly calls for further policy interventions.