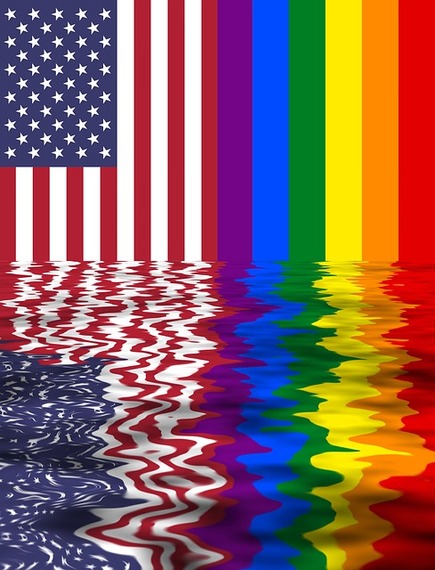 Sexual orientation discrimination is sex discrimination because it necessarily entails treating an employee less favorably because of the employee's sex. For example, assume that an employer suspends a lesbian employee for displaying a photo of her female spouse on her desk , but does not suspend a male employee for displaying a photo of his female spouse on bis desk. The lesbian employee in that example can allege that her employer took an adverse action against her that the employer would not have taken had she been male. That is a legitimate claim under Title VII that sex was unlawfully taken into account in the adverse employment action. ("Such a practice does not pass the simple test of whether the evidence shows 'treatment of a person in a manner which but for that person's sex would be different.'"). The same result holds true if the person discriminated against is straight. Assume a woman is suspended because she has placed a picture of her husband on her desk but her gay colleague is not suspended after he places a picture of his husband on his desk. The straight female employee could bring a cognizable Title VII claim of disparate treatment because of sex.

This goes well beyond sexual stereotyping, which didn't cover all sexual orientation claims; it only applied where gay and lesbian employees didn't fit into stereotypical gender roles.

So how do you prove sexual orientation discrimination under sex discrimination laws? There are several ways you may be able to prove you were targeted due to your gender:

Direct evidence: If your boss or HR are dumb enough to make comments about your sexual orientation, then that's direct evidence of sex discrimination. Juries and judges love this kind of evidence. Calling you "fa****," making jokes about your masculinity or femininity, or saying that gay marriage is a sin while pointedly looking at you could all be evidence of sex discrimination. If these comments are made, write them down, noting date, time and any witnesses. If the person making that comments participates in the decision to demote or fire you, then you can use this evidence.

Discipline: If you had a pristine employment record before you married your partner or came out at work and now you've started getting written up, that could be an indication of sex discrimination. If you're being written up for things that straight employees also do without being disciplined, that could help your sex discrimination claim. It could also be part of an gender-based harassment claim.

Exclusion: If your straight colleagues are included in lunches, events, client meetings or training and you're left behind, that could also be evidence of sex discrimination or sex-based harassment.

Favoritism: When straight employees are given the best leads, assignments or office space, it's a pretty good sign that you're being pushed out due to your sex.

Promotions and hiring: If the new hires and the folks who are getting promoted are all straight, your employer may be discriminating based on sexual orientation. Even if you didn't apply for a promotion or position, if you notice that only straight people are getting new jobs and promotions over better-qualified LGBT employees, your employer might be trying to project an image that doesn't include people that don't fit into traditional gender roles.

If you think you've been subjected to sexual orientation discrimination, you may have legal protection even if your state laws don't protect LGBT employees. Contact the EEOC or an employee-side employment lawyer to find out more about your rights.

If you need specific legal advice, it's best to talk to an employment lawyer in your state. For more general information about employment law issues, check out Donna Ballman's book, her award-winning employee-side employment law blog, Screw You Guys, I'm Going Home and her other employment law articles here at The Huffington Post.

Employee-side employment lawyer, author award-winning books including Stand Up For Yourself Without Getting Fired. Tweets as @EmployeeAtty.