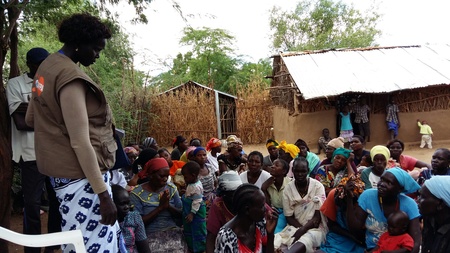 Dark rain clouds hung ominously like the 'Sword of the Damocles' over the Kakuma refugee camp in Northern Kenya, when we arrived there on April 17, 2015.

Over 97,000 South Sudanese refugees have fled war, misery and turmoil from South Sudan and have arrived in Kakuma.

Ever since the conflict broke out in December 2013, the number of South Sudanese refugees is increasing by the day. They are being hosted by Ethiopia, Kenya, Uganda and Sudan.

I saw a sign board at the UNHCR, the UN's refugee agency office in Kakuma. "It does not take much to become a refugee. Your race or beliefs can be enough."

Over 80 percent of the refugees are women and girls, many tell of stomach-churning tales of physical and sexual violence.

Rebecca Chol (name changed) was holding her toddler protectively in her arms. She had recently arrived from a village near Rumbek in South Sudan. She was sitting with a group of women who had come for psychosocial counseling at a United Nations Population Fund (UNFPA) supported Gender Based Violence (GBV) center. The center is run by one of UNFPA's partners, the International Rescue Committee, IRC, whose work in the refugee camps in Kenya has been commendable.

It was heartbreaking to hear of the savage violence and brutality she and her family had experienced at the hands of opposing forces. She had been raped and abused, and managed to escape with her young child.

Rebecca's story is, sadly not uncommon, but is characteristic of the "new normal" where the tyranny of sexual violence is used as a weapon of war in many conflicts. It is being used for political ends, for ethnic cleansing and to sow terror and cause panic amongst civilians. It is destroying lives, fuelling the conflict, creating more refugees and internally displaced people (IDPs).

In South Sudan this may be jeopardizing any hope for a ceasefire as well as undermining the long-term prospects for reconciliation.

Once a country of incredible promise, the Comprehensive Peace Agreement of 2005 spelled hope and optimism for the future. A country torn by internecine conflicts, a brutal war of secession from the North combined with protracted periods of hunger, nutritional crisis and absence of basic services, the people of South Sudan have endured one crisis after another.

The entire world celebrated the birth of the youngest nation in the world in 2009, but in December 2013 the gains from the peace process began to disintegrate.

Repeated efforts have been made by the international community and neighboring countries to secure peace, but since fighting broke out in December 2013, the situation has been deteriorating by the day.

Ms Anne Richards, Assistant Secretary, Bureau of Population, Refugees and Migration, of the US Government remarked in Nairobi, "we currently face a long list of global disasters, conflicts, and disease outbreaks. Yet none fills us with as much frustration and despair as the crisis in South Sudan. Why? Because this crisis should never have happened."

She added that, "The warring parties share the full responsibility for the violence that has engulfed much of the country and for the suffering of their fellow South Sudanese. We call on all parties to the conflict to end the fighting. Now"

The Kenyan Government has magnanimously hosted and supported refugees in the country ever since it was started in 1992. This camp, superbly run by UNHCR, currently serves over 180,000 people who have fled wars and violence in neighboring countries, some coming from as far as West Africa.

The women and children of South Sudan, are amongst the most vulnerable. The protracted emergencies and complete absence of social services is destroying the human capital base and potential of the youngest country in the world. That is why UNFPA is making efforts to ensure that the specific needs of women and girls are factored into a humanitarian response and supporting women is one of the best ways to ensure the health, security, peace and well-being of families and entire communities.

The conflict in South Sudan also shows that while it is important to focus on development and nation building, but if tensions continue to simmer under the surface, the gains made will be quickly lost.

For any lasting peace to be possible in South Sudan, it is essential that political consensus emerges from grass-root level peace initiatives, coming out of ongoing local peace infrastructures, which take into account existing differences between various tribes as well as political factions.

Mr Erik Solheim, the Chair of OECD-DAC remarked in his poignant piece on South Sudan- How Could We Get It So Wrong? "The short answer: We forgot the primacy of politics."

The international community and key interlocutors must send an unambiguous and loud message to all sides to the conflict, "CEASEFIRE NOW." A warning of zero-tolerance of sexual and gender based violence, must be clear and unequivocal.

We owe this to the women and children of South Sudan.