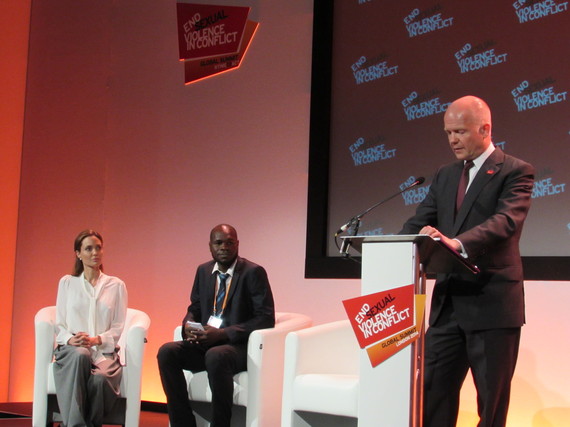 We are members of the Missing Peace Young Scholars Network: early-career researchers from a wide range of academic backgrounds, committed to understanding and ending sexual violence in war. The Network was created in 2013 by The United States Institute of Peace (USIP); The Human Rights Center at the University of California Berkeley; The Peace Research Institute Oslo (PRIO); and Women In International Security (WIIS).

We were first convened in Washington, D.C., at the Missing Peace Symposium in February 2013, then again in May 2014.

Many of us were fortunate enough to attend this week's summit, as well.

Heartened to see the energetic dialogue and political participation you have facilitated, we offer some thoughts about the state of our knowledge regarding the patterns, causes and consequences of sexual violence in war. We do so to highlight the need for evidence-based policy and programming on such a complex issue as conflict-related sexual violence.

Myths about sexual violence in conflict are prevalent in policy discourse. Three stand out:

Myth 2: Sexual violence is a weapon of war.
Our research shows that sexual violence in conflict has many causes, from individual opportunism to malignant socialization practices to military strategy. We strongly urge policy-makers not to assume that wartime sexual violence is always a "weapon of war" that can be solved with increased prosecutions and harsher punishments. We understand the importance of accountability and consequences. However, policies that seek to prevent such behavior must look beyond punishing sexual violence; we must address the root causes of such violence. In truth, much sexual violence is a symptom of larger structural issues in society such as gender inequality.

This variation of form and motive may be due to the fact that there is no single profile of perpetrators, or of victims. Women and men of all backgrounds perpetrate, and suffer, sexual violence. Both rebel groups and government militaries are guilty. Notably, even in wartime, intimate partners -- not fighters -- are the most common perpetrators of sexual violence.

Myth 3: Sexual violence is a product of war and will end when peace arrives.
Research has shown that sexual violence has deep roots in the pre-conflict phase that are intensified during conflict and perpetuated in the post-conflict phase. Similarly, research has indicated a strong correlation between domestic violence and violence within societies.

We have also identified a number of gaps and challenges in our research:

Challenge 1: Underreporting
All gender-based violence, including sexual violence in conflict, is vastly underreported. Across several surveys, at least a fifth of women in conflict-affected populations reported having suffered sexual violence -- and an unknown, but potentially large, proportion of victims chose not to report their experiences due to significant barriers to disclosure. Official sources are even less complete: across both conflict and non-conflict settings, only 7 percent of women who reported experiencing sexual violence on a survey said that they had also told an official source (police/legal, medical, or social services) about it.

Challenge 2: Causes and patterns
There are notable differences in patterns of sexual violence across conflict settings, suggesting that the motivations and disincentives for this abuse vary significantly throughout the world. We study how the motivations of state and non-state armed groups vary across contexts because we need to understand the motivations for violence before we can prevent it.

Further, sexual abuse of men and boys often occurs in the context of armed groups as well as in detention, prisons, and many other conflict and civilian settings. While awareness of these nuances has increased, existing data are woefully inadequate.

Priority 1: Data
Without reliable, accurate data on patterns of sexual violence, we cannot determine when policies for prevention and treatment are effective. Improvements in baseline data can be partly achieved by using clear, shared definitions, implementing confidential screening processes to identify and refer survivors of violence to essential treatment and counseling where services exist, and increasing deployment of population-based survey methods.

Priority 2: Evaluations
We need rigorous evaluations of existing and new programs to establish what works in prevention and response, properly allocate resources, and to avoid unintended harms. To this end, shared definitions are crucial in reporting the incidence of sexual violence and in evaluating programs' effectiveness. The UK Department for International Development's current commitment to supporting research in this area is encouraging, but more can be done.

Priority 3: United Nations Security Council Resolution 1325
Mainstreaming the principles of UN Security Council 1325 is one key pathway to help end sexual violence. For example, our research has shown that peace operations are a key venue for prevention efforts. Indeed, peacekeepers from troop contributor countries that have endorsed UNSCR 1325 on Women, Peace and Security and its follow-on resolutions are less likely to engage in sexual exploitation and abuse than peacekeepers from countries who have not.

We sincerely applaud the UK's Preventing Sexual Violence Initiative for tackling these difficult issues, and we look forward to working with policy-makers to support efforts that will go beyond punishment and retribution to effectively treat, prevent, and ultimately end sexual violence in conflict. We only hope that this critical action is evidence-based.