Foodporn is a thing. Search the hashtag on Instagram and you will find over 74 million images.

Try explaining it to your grandmother and she may not believe you. "Trust me Grandma, people love photos of brightly colored meals in beautiful dishes." You couldn't blame her for being a little perplexed.

But foodporn is here to stay and thanks to likes of Naomi Taplin, creator of Studio Enti, porcelain has never been this sexy. 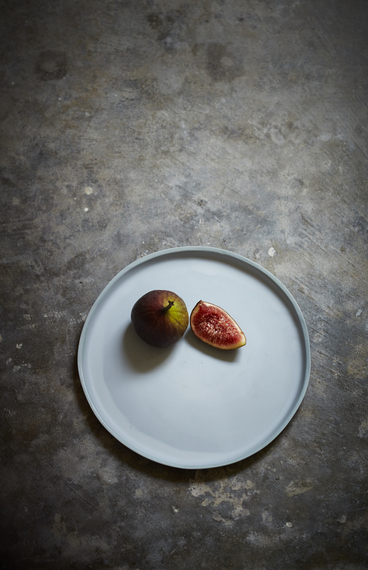 Studio Enti tableware is fast becoming a favorite among Australian food stylists. Featured regularly in the likes of Gourmet Traveler, Naomi's handmade range has been the cornerstone of many a stunning, photographic spread.

So how does one go from having a love of ceramics, to making a viable business out of their craft. Like many creatives, Naomi never had a business plan.

"Lots of hard work and some luck! I just started making pieces and it grew from there," Naomi says.

Qualifications and grants
Naomi graduated from a Bachelor of Design at the College of Fine Arts in Sydney and in 2013, secured a $10,000 grant from the Australia Council for the Arts.

"Although it doesn't sound like much, when I was starting out it was like winning the lottery. That money allowed me to rent a small space in a collective studio with other artists and stylists. On the two days of the week that I had help with my daughter, I used my new space to work on a product range," Naomi says.

"Working in hospitality throughout my university days, I knew plenty of people in the industry. From those networks I secured commissions to produce tableware for two restaurants. Those jobs really kicked things off for Studio Enti," Naomi says.

Those first orders were a steep learning curve. Creating a product to meet a client's specifications, and making it a viable business venture were new frontiers.

"Ceramics are a volatile product and there are so many touch points where something can go wrong. It was a case of trial and error to make a plate that was aesthetically pleasing to the client, yet durable enough to withstand a commercial kitchen," Naomi says.

The range impressed, and another two high-end restaurants commissioned Studio Enti for their tableware.

Small business reality
Although there has been success, the first two years were tough.

"Someone recently asked me about my financials and I cringed. If I had done a business plan inclusive of all the figures, I would probably never have started. In the beginning it's about getting exposure so you really undervalue your work. However now things are turning around and I am able to set my price point where it should be. I probably need to do a business plan now," Naomi reflects.

Injury and insight
Naomi did receive some business coaching when she was forced to take a step back from the business.

In the first two years of operations Naomi broke one ankle after the other, in separate incidents, months apart. During the two periods of forced recuperation, Naomi tended to the administrative side of Studio Enti. She created her website, designed her logo, and took some business coaching where she learned about "workhorses" and "unicorns."

"Workhorses are the projects that allow you to keep going. For example I am looking at taking on some production work. I help the client create a product and then produce large numbers of it for them. Workhorses don't satisfy all your creative desires, but they pay the bills. Unicorns on the other hand are your big creative projects, the ones that feed your soul. You need both unicorns and workhorses to keep your business going," Naomi says.

Being a one woman show with two broken ankles in two years, Naomi would have been forgiven for wanting to throw it all in. But she didn't. Instead she learnt to trust.

"There have definitely been times when I have wondered, "What I am doing?" Then all of a sudden something really amazing will happen with the business, and it confirms I am heading in the right direction," Naomi says.

The juggle
Wrapping her career around raising her young daughter, as a single mother, has also been a challenge.

"There are days when I have to remind myself that I'm a mother first! Technology has made bringing work home with me far too easy. However that technology has also enabled numerous small businesses just like mine. The real game changer has been Instagram. Especially for me where there is no marketing budget. Instagram has allowed me to showcase my work on a global forum, and build a client base," Naomi says.

So next time you're on Instagram searching for your latest fix of foodporn, take a moment to appreciate the tableware, it may just be a Studio Enti original.