I'm a big baseball fan -- the San Francisco Giants in particular, ever since the Barry Bonds/JT Snow/Rich Aurelia days. I'm also Native; Shoshone and Paiute from Nevada. So Native American Heritage Night at the Giants game on Monday, June 23rd seemed like an ideal time to attend a game with my little sister.

That is, unless you consider watching non-Native people prance around in a costume headdress and getting slammed to the ground by your hair by police to be "ideal."

Upon noticing a group of seemingly white men passing around a red, white, and blue plastic headdress, another Native man whom I had just met in the next seat and I decided to go talk to them about what they were doing not being an acceptable way to celebrate "Native American Heritage Night." I've spoken to multiple people before when encountering them in plastic headdresses and have experienced mixed results. In my most successful attempt, the man actually took the headdress off -- without prompting -- and gave it to me and gave me a hug and thanked me for taking the time to explain it to him. 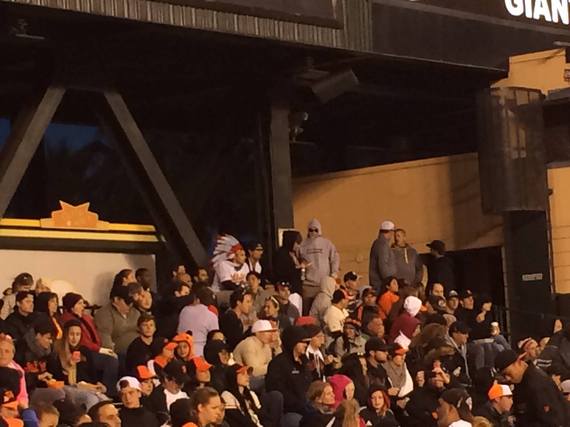 This particular group was not quite as open. I started crying because I didn't feel heard and the man who most recently wore the headdress became flustered and finally said, "What do you want from me?!" So I said, "Give me the headdress." Surprisingly, he did. Mission accomplished. Problem solved, kind of.

Security somehow showed up and a self-proclaimed Native friend showed up and demanded the headdress back. Without questioning what actually happened, security demanded I return the headdress. I refused. I thought to myself, no way I'm going to willingly hand this back. Crazy Horse would have rolled over in his grave. Because I wouldn't comply, we were ushered behind the bleachers, where around six members of the San Francisco Police Department were waiting and they ripped the headdress from my hands. Then a Giants security person said we were ejected from the game for "unruly behavior." We wouldn't leave because they wouldn't tell us what about our behavior was unruly, so the police decided that was cause enough for throwing us on the ground and handcuffing us. After over an hour of being manhandled, intimidated and detained, we were released without so much as a ticket.

There are so many layers here, it's hard to pick a starting place. Some people feel automatically attacked, and I get it. You've embarrassed yourself, you didn't mean to be racist, and you thought it was cool; you're just ignorant, and you're just a byproduct of this society that breeds people to not think beyond what they see in front of them or on TV. On TV you see misinformed and romanticized versions of our actual cultures, with no mention of the issues affecting our communities. So when a real Native person takes the time to explain the harmful impact of, say, wearing a headdress, you ought to take a moment to listen.

There should also be an acknowledgment of the difference between Native blood and Native culture. I'm tired of these people that are pretty sure their great-grandmother was part Native speaking on behalf of a culture they have no connection to. If your grandma was Catholic but you aren't, that doesn't give you authority to go around speaking as a Catholic person, and it certainly doesn't give that Jewish guy the go-ahead to tell Catholic jokes just because you said it was OK.

These actions and images psychologically affect our children. They are racist. I hear about free speech all the time as an argument as to why people should be allowed to do what they want, keep the mascots, keep using names, and keep wearing costumes. That's fine, but be upfront and acknowledge that "I am doing it because I'm racist and I just don't care." Keep your excuses. 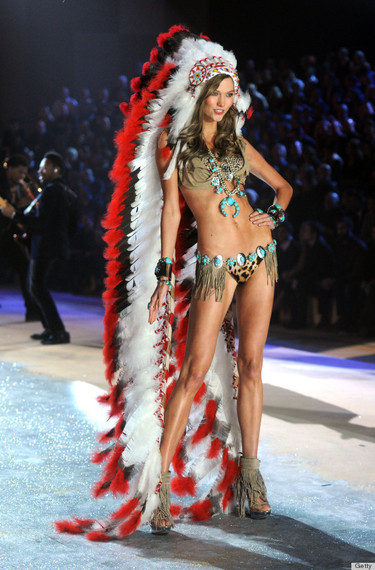 The real kick in the pants was when I saw that they gave the headdress back to the group and the "Native" friend put it back on. I wonder if he really felt like he earned his feathers, and was a warrior sitting there thinking how he got a young woman, who dared open her mouth about the injustices affecting the community we both belong to, thrown out of Native American Heritage Night.

April is a UC Davis graduate where she currently works as a junior researcher in the Department of Environmental Science and Policy.