There is a folk tale / fairy tale feel to this month's San Francisco Silent Film Festival. The festival's upcoming winter event, a now annual day-long series of screenings at the Castro Theater, takes place on Saturday, February 16. It includes not-to-be-missed films, live musical accompaniment with each program, special guest introductions, author book signings, and the opportunity to see great films of silent era in the confines of a historic theater.

That's especially true in the case of both The Thief of Bagdad and Faust. Each of these landmark films feature sets, scenes and special effects remarkable for their time -- and still quite impressive today. One must, for example, see Faust on the big screen of the Castro in order to appreciate its chilling grandeur, notably the scene where the demon Mephisto towers over a town, his dark wings spread wide, as a fog rolls in spreading deadly plague.

While the San Francisco Silent Film Festival winter event ends with Faust, it begins on a much happier note with the first cinematic version of a fairy tale favorite.

Walt Disney was a 16-year-old in Kansas City when he attended a screening of a new movie made from the familiar German fairy tale, Snow White. It was one of the first feature films the future moviemaker would see, and he was duly impressed. "I thought it was the perfect story... It had the sympathetic dwarfs... the heavy... the prince and the girl... romance."

Some 21 years later, inspired by that earlier film, Disney made a popular animated version of the same story. Coinciding with the Walt Disney Family Museum's celebration of Snow White (1937), the Silent Film Festival is presenting the film that started it all. Directed by J. Searle Dawley with petite Marguerite Clark in the lead role, this once popular film was thought lost until a worn copy was discovered in recent years in the Netherlands. It has since been restored. Clark, one of the most popular actresses of her day, starred in the stage version of Snow White and the Seven Dwarfs on Broadway in 1912. Her portrayal of the dewy fresh heroine in the film made four years later is still right on target -- despite the fact she was 33 years old at the time. (Approximately 63 minutes, with an introduction by Disney historian J.B. Kaufman and live musical accompaniment by Donald Sosin on grand piano.) Following the film, Kaufman will be signing copies of his books, including Snow White and the Seven Dwarfs: The Art and Creation of Walt Disney's Classic Animated Film (Weldon Owen) and The Fairest One of All: The Making of Walt Disney's Snow White and the Seven Dwarfs (Walt Disney Family Foundation Press). Released last year, both books mark the 75th anniversary of Disney's classic film.

"Think slow, act fast" is a quote attributed to Buster Keaton. Even if apocryphal, it suggests the studied approach behind his many popular films. Keaton, whose consistently deadpan expression earned him the nickname "The Great Stone Face," was best known for his trademark physical comedy. At times, it was impossible to take your eyes off him. This program features three early Keaton shorts, each made shortly after Keaton left Fatty Arbuckle to work on his own. On the bill are One Week (1920, 24 minutes, with Buster Keaton, Sybil Seely, and Joe Roberts), The Scarecrow (1920, 18 minutes, with Buster Keaton, Joe Roberts, Sybil Seely, and Luke the Dog), and The Play House (1921, 23 minutes, with Buster Keaton and Virginia Fox). (Approximately 70 minutes, with an introduction by the legendary television writer and director Frank Buxton and live musical accompaniment by Donald Sosin on grand piano. It's worth mentioning that long before he was involved with TV shows like The Odd Couple and Happy Days, Buxton worked with Keaton in Summer stock.)

The Thief of Bagdad shows Douglas Fairbanks at the top of his form. Directed by Raoul Walsh and adapted from One Thousand and One Nights, the story revolves around a thief (Fairbanks) who falls in love with the daughter (Julanne Johnston) of the Caliph of Bagdad. To win her hand, the thief must bring back the world's rarest treasures. This rousing fantasy is replete with flying carpets, winged horses, and underwater sea monsters. Exquisite camerawork and lavish sets support the film's special effects, all of which make The Thief of Bagdad a wildly entertaining spectacle. Also in the cast are Snitz Edwards, Sôjin, and the lovely Anna May Wong. Inducted into the National Film Registry in 1996 and voted one of AFI's top 10 classics in 2008, The Thief of Bagdad has recently received a crisp new restoration. That restoration will be shown at the winter event. (Approximately 159 minutes, with introductions by film historians Jeffrey Vance and Tracey Goessel and live musical accompaniment by the Mont Alto Motion Picture Orchestra.) Following the film, Vance will be signing copies of his books, including his widely acclaimed Douglas Fairbanks (University of California Press).

My Best Girl (1927) was Mary Pickford's last silent film. Although she would make four more sound films and win an Oscar, My Best Girl is the pinnacle of her career, an engaging comedy and an exemplary illustration of what made Pickford the most loved and most popular movie star in the world. Some even consider it their favorite Pickford film. Directed by Sam Taylor (famous for his work with Harold Lloyd), My Best Girl is the story of a Five & Dime stock girl (Pickford) who falls for the store owner's son (Buddy Rogers) masquerading as a new employee. The boy's parents, of course, have other ideas about the kind of girl he should marry. Pickford and Rogers (in his first role after the hugely successful Wings) are wonderful together, and their onscreen chemistry is more than apparent. In fact, in ten years time Pickford would divorce Douglas Fairbanks and marry Rogers in a sort of storybook Hollywood romance. Also in the cast of My Best Girl are Lucien Littlefield and Carmelita Geraghty. The print shown Saturday contains more shots/footage than the DVD version. (Approximately 90 minutes, with an introduction by silent film historian Jeffrey Vance and live musical accompaniment by Donald Sosin on grand piano.)

Director F.W. Murnau's Faust is an expressive, cinematic telling of the old European legend, famously immortalized by Goethe, of the learned man who sells his soul to the devil. Magnificent in its depictions of heaven and hell and of a nightmarish old world, Faust is a masterpiece of German Expressionism, as boldly distinctive as Murnau's other masterpiece, Nosferatu. When Emil Jannings's wily Mephisto shows up to tempt Faust, played by Gösta Ekmann, it seems God may lose his wager with the devil over the learned man's soul. Murnau's use of chiaroscuro beautifully contrasts not only light and dark, but also life and death. And here, evil is brilliantly depicted in Jannings's nuanced, subtly comic performance. Pretty newcomer Camilla Horn plays Gretchen / Marguerite, and future director William Dieterle is her brother. (Approximately 116 minutes, with live musical accompaniment by Christian Elliott on the Mighty Wurlitzer.)

For more info on the programs and musicians, visit the San Francisco Silent Film Festival's website.

Thomas Gladysz is a Bay Area arts and entertainment writer and early film buff, as well as the director of the Louise Brooks Society, an Internet-based archive and international fan club devoted to the silent film star. Gladysz has contributed to books, organized exhibits, appeared on television and radio, and introduced Brooks' films around the world. He also edited the "Louise Brooks edition" of The Diary of a Lost Girl. 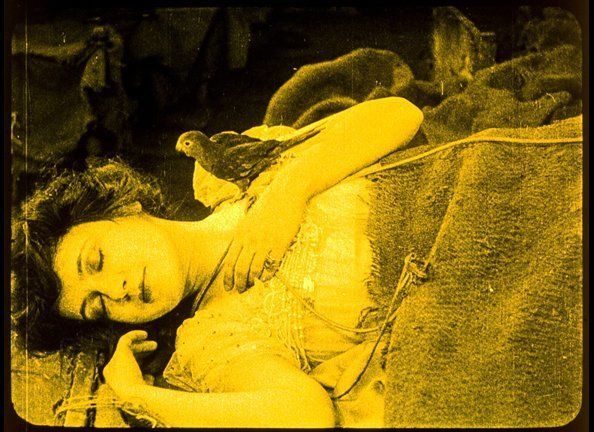