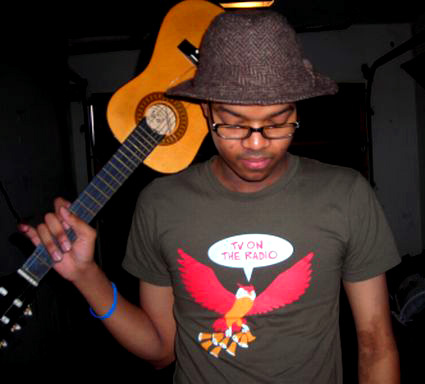 Chief among the themes emerging from the recent suite of KCET Departures is that communities change. While national imaginings of Los Angeles still depict it as a flat non-place poor in history, the local voices Departures has amplified in Venice, Chinatown and Richland Farms offer alternate, first person testimonies to crowded, sometimes tumultuous cycles of birth, rebirth and transformation. Departures interviewees like Jatuan Valentine & Navalette Bailey from Oakwood lend much-needed human texture to often impersonal-seeming shifts in real estate and demographics, the tidal flows of commercial money in and out of our zip codes.

But a specter haunts many of these stories, a guilty creature called "gentrification" who - in the telling at least - leeches their richness and complexity before reducing them to simple undifferentiated parables of loss and greed. Indeed, the vast majority of conversations about gentrification in this country are a literal kind of ghost story, ritualized tales where stylized embodiments of demographic good and evil play out their appointed roles in predetermined scripts. These dramas always begin in the hardscrabble idyll of monolithic, once-upon-a-time 'hoods, lurch through zero-sum economic warfare where white gain goes hand-in-hand with colored/working-class loss, and invariably end in bohemian elegy, pale-faced victors compelled by guilt to speak for the dead, the erased, the evicted. In such a vision, the unique texture of, say Oakwood, is lost. Before Oakwood could become the site of "gentrification" many say it is today, it transited through other stages not typically part of the standard white/non-white two-step, phases where black middle class and black working class people faced off in their own internecine and often inconclusive encounters.

Those other, interstitial stories are rarely told because our image of immigrants, people of color or the poor often admit only the most stereotypical or easily communicated details. Take the key player in every gentrification narrative, the hipster. He is rarely the figure evoked by African American novelist Colson Whitehead in a recollection of gentrification days across the country in Brooklyn:

I used to live in Fort Greene, and whenever I visit my old neighborhood, I am tormented by the same absurd thought: I should have bought that crack house when I had the chance. Never mind that I was broke--this line of thinking is a natural member of that gang of peculiar New York regrets. Regrets about places you loved but had to leave, places you coveted but could never pay the admission price, places that were surrounded by invisible barbed wire before you were born. Regrets about quaint little crack houses with southern-exposure gardens, owner duplex, needs TLC. [full story]

The hipsters of most gentrification fantasies - whether set against the backdrop of Whitehead's Brooklyn or our own Chinatown - are always white newcomers, real estate-minded vampires coming to feed on the flesh of authentic communities. We rarely imagine the possibility of a Whitehead: colored, middle-class hipsters carrying both universal dreams of cheap rents and their own peculiar set of ambivalences on slouched shoulders as they navigate neighborhoods on the cusp of change.

Whitehead's tale of a quaint little crack house with a view doesn't say so explicitly, but being a white gentrifier is not quite the same thing as being black/Latino/Asian and snapping up an undervalued steal. For the white gentrifier there is profit and maybe wry guilt, but for the colored gentrifier there is profit, guilt, and a fear of betrayal. It is, after all, very often their "own" communities that they're making safe for future generations of white folks. In neighborhoods with informal economies where word of mouth trumps Craigslist, the first person to hear of the perfect vacant warehouse often has what amounts to a blood connection to the place. This is why no ethnically charged tale of neighborhood change is fully complete without initial waves of doubled black/Latino/Asian folk transforming neighborhoods from within: shop-keeps, restaurateurs, fashion designers, idiosyncratic sitcom-style landlords, classmates at art school and literal boyfriends and girlfriends who help put the previously off-limits neighborhoods on white real estate maps. As neighborhoods change these figures often sit between the place's old and new incarnations, becoming the positive "local color" that gives a gentrifying area its coveted character.

But not too much character. Consider the divergent trajectories of the businesses described by Chris Featherstone against the backdrop of a changing Venice. A BBQ joint can survive transition - who doesn't need a good rib? - but what about a black owned barber shop whose expertise is black hair?

Or consider the role of Chinatown's legendary antique businesses as described by Mason Fong. They defined Chinatown, but, at the same time, "the goods were not for the Chinese," the antique shop creating a doorway through which art & design minded non-Chinese became better acquainted with the area.

The local hipster who fears they are directly contributing to their community's irrevocable transformation carries a special kind guilt. As Steve Wong's story of his move from the suburbs to Chinatown illustrates, the ethnic harbinger has to reconcile that guilt with the pursuit of their bliss and economic self-interest. That these are often people - artists and other others - who don't fit the bill of what a Chinese American or an African Americans or a Mexican Americans (and so on) is just another rich, but often under-appreciated, irony.

By admitting the stories of people of color who occupy these transitional roles in the trajectory of gentrification we find that our straightforward notions of colored suffering and white rapaciousness only tell part of the story. We exclude a Steve Wong because he doesn't fit the profile of "local resident taken advantage of by the market." He's too well educated, too business minded, too baroque in his concerns, and, anyway: he's technically the one who took advantage of the market opportunity. Instead of such complicated strivers, we prefer the colored actors in our gentrification passion plays to be, in a word, simple: honorable but hapless immigrant and working class victims waiting to be relieved of properties before a market turn. In many ways the popular imagination prefers a Willy Wyatt to a Steve Wong:

There are many, many Willy Wyatts in our cities. Our economy is merciless when it comes to poor and working people who first fall victim to the markets, then fall through our torn municipal safety nets. But in a media and policy environment marked by short attention spans and limited resources, where authenticity is often an index of suffering, we think of our ethnic communities primarily as aggregations of problems and victims, framing the causes and solutions to our issues in terms of stark - but narrow - racial oppositions. It is an understandable form of mental triage. But Los Angeles' ethnic communities are so diverse, so dynamic, that they can't help but include both the gentrified and the gentrifier. There's actually a kind of strength to that, as well as hint of a way forward. But unless we tell both interwoven stories we'll never understand how our communities become what they are.

Photo Credit: The image associated with this post was taken by Flickr user blipster. It was used under Creative Commons license.