China's shadow banking system thrived in the years after the global financial crisis, until reined in by regulators since 2013. Nevertheless, new forms of shadow banking are emerging.

"Shadow banking" has become a buzzword ever since Paul McCulley, then with PIMCO, coined the term in 2007 to describe the financial intermediation routed outside balance sheets of commercial banks and other regulated depositary institutions. He pointed out how banking functions thereby exercised - without access to central bank liquidity or public sector credit guarantees but free of regulatory costs - had been at the core of a powerful liquidity-generating, maturity-transforming machine at play in the US economy in the 2000s. Its apparently smooth handling of risks reduced financial intermediation costs but was in fact blowing serial bubbles in asset markets in the run-up to the global financial crisis (Canuto, 2009).

Shadow banking systems have since been observed in many places and are now subject to regular monitoring by the International Monetary Fund (IMF) and the Financial Stability Board (FSB). Including in China, where the People's Bank of China (PBOC) defines shadow banking as "credit intermediation involving entities and activities outside the regular banking system" that offer "liquidity and credit transformation (...) which could potentially [originate] systemic risk or regulatory arbitrage" (PBOC, 2013).

Estimates of the size of China's shadow banking system reckon it is still relatively small as a proportion of GDP or total financial assets as compared with advanced economies, but has grown very quickly after 2008. According to the 2015 Global Shadow Banking Monitoring Report released by the FSB just a few days ago, China's share of total global shadow banking assets grew from 2% in 2010 to 8% in 2014 (Chart 1). Despite a small decline from 41% to 40% in the same period, the US still has the largest shadow banking sector - $14.2 trillion in 2014 - corresponding to more than a third of the shadow banking assets reported by 26 jurisdictions. 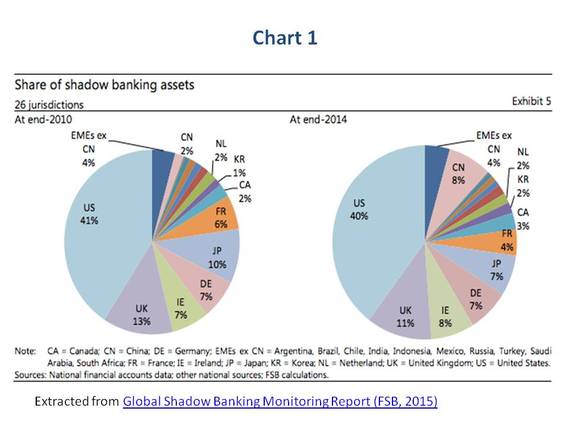 The post-2008 non-banking credit surge reflected specific features of China's financial regulation. The government's strong counter-cyclical fiscal and monetary stimulus ran into mostly state-owned banks whose ability to respond with on-balance-sheet credit was constrained, given caps on their lending volumes and ratios of loans to deposits. Banks' activities were also restricted by ceilings on deposit interest rates, as well as regulators' preferences for a limited range of industries. Non-bank entities and banks' off-balance-sheet operations catered to the surge in the demand for credit, as they faced less stringent limits on reserve requirements and enjoyed higher flexibility of pricing on both the funding and lending sides. A big slice of these flows went to financing local governments for real estate and infrastructure projects, the so-called Real Estate Investment Trusts (REITs) and Local Government Financing Vehicles (LGFVs). Widespread implicit guarantees by the government and state-owned banks helped fuel this process.

Concerns rose about the sustainability of a rising debt stock, as China's economic growth started to rebalance toward consumption and services, with a slower but more sustainable pace reflecting a change of growth patterns - see Canuto (2013). The corporate debt to GDP ratio surged from 102.8% in 2008 to 141.8% in 2014 (see Chart 2). At the beginning of 2014, fears about the possibility of a financial unravelling and a consequent hard landing of the Chinese economy had caught much attention, given possible spillover effects abroad. By then this fear had replaced the US taper tantrum as the main factor affecting bond spreads of other emerging economies - see Canuto (2014). 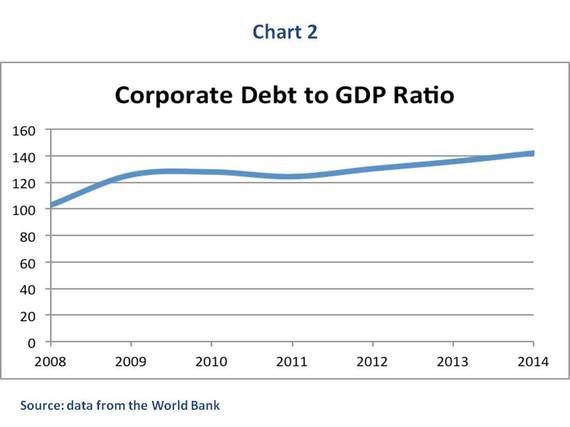 REITs and LGFVs, which received the bulk of "wealth management products" investment, corresponding to respectively 10% and 25% of the total investment of trust companies in 2013, slowed as the real estate market cooled. Regulatory efforts, however, have played a major role in reducing shadow banking flows. Not only did regulators demand a gradual move of risk from off balance vehicles onto banks' balance sheets, but they also enforced financial discipline on local governments, urging them to take measures to meet repayment obligations. In September 2014, the State Council announced that ceilings on local governments' borrowing would be imposed, and that they would not be bailed out. Moreover, after the enhancement of market discipline imposed on the inter-bank market in June 2013, the appetite of smaller banks for borrowing heavily there to fund high-risk lending, often through shadow banking channels, diminished substantially (Elliott, 2015). As a result, China's shadow banking growth slowed down last year, displaying an exchange rate-adjusted growth rate approximately 5 percentage points lower in 2014 compared to the previous year (Chart 3). 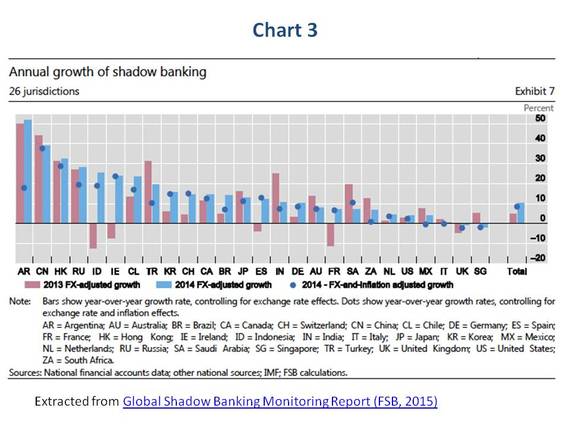 Just to face new forms of shadow banking, like P2P

Shadow banking is a fulcrum of innovation for the financial industry and China is not different in that regard. New forms are quickly emerging and taking over the market. For instance, this October, the number of Peer 2 Peer (P2P) online lending platforms had climbed to 2,520 from only 50 in 2011, increasing a whopping 71% just since 2014. Total transactions reached 120 billion RMB, or US$ 18.8 billion (Chart 4). P2P lending operates without going through any traditional financial intermediary such as a bank or other traditional financial institution. 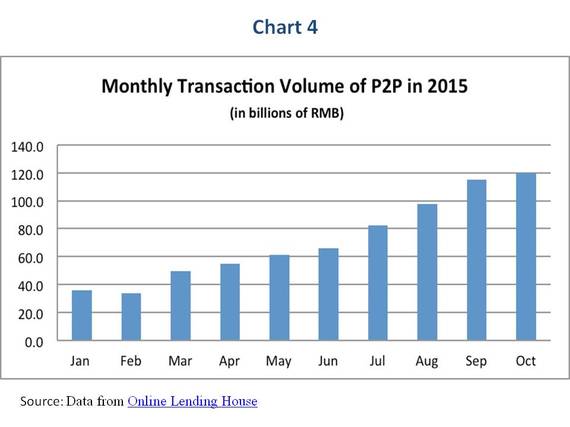 This new form of shadow banking carries over its old features: no liquidity support from the central bank, operations outside the regular banking system and, most importantly, bearing systemic risks. Maturity mismatch and adverse selection are also common features.

P2P has been blamed for channeling credit into the recent stock market bubble, being partly responsible for the increase of the Shanghai Composite index - China's benchmark stock index - by 70% from March to June this year, followed by a burst in mid-June. Individual investors inflated the stock market bubble through mass amounts of investments in stocks often using borrowed money. Regulators have banned P2P companies from lending for stock purchases. The Shanghai Composite declined by 43% between June 12th and August 25th, after the "Black Monday".

P2P itself is a generic designation for an innovative financial platform that is expanding in numerous places in the world. In the US, P2P is prospering as well and entering new markets such as the provision of loans to students and households. Indeed, in China P2P has provided cheap and quick loans to the private sector. However, the online financing playfield is still far from disciplined. Constant headlines about troubled companies that ran away are no surprise to investors today. Last month alone, P2P platforms that fell into deep financial trouble numbered 47 nationwide. The rate of return most P2P platforms generate ranges from 12% to 24%. However, to attract investors, many of those platforms "guarantee" a higher than industry average return. Some of these "high return guaranteed" companies have already gone bankrupt before paying back the principal to investors.

On July 18th, the central bank issued guideline documents to address online financing, continuing earlier efforts to draw up rules to curb shadow banking risks. The main take-away is that regulators have embraced online financing as a symbol of financial innovation, but recognize the potential risks and highlight the importance of supervision. China's new 13th 5-year Plan, the "Shi San Wu", released this month expresses the Chinese government's attitude towards online financing by referring to a need to develop Internet financing in a regulated manner.

Crossing the river by feeling the stones ... but faster

The old quote about stones and a river from the 1950s still applies to today's Chinese economy. But recent policy changes have shown a desire to accelerate the transition away from the official bank-based, heavy industry-oriented financial system toward one where market forces and finance to services and innovative industries have a greater weight. Last August, the exchange rate mechanism has been made more market determined. Deposit interest rate ceilings for commercial banks and rural credit cooperatives have been removed, as a key move towards interest-rate liberalization. Now, experimenting with a morphing shadow banking system also seems to be part of that river crossing.