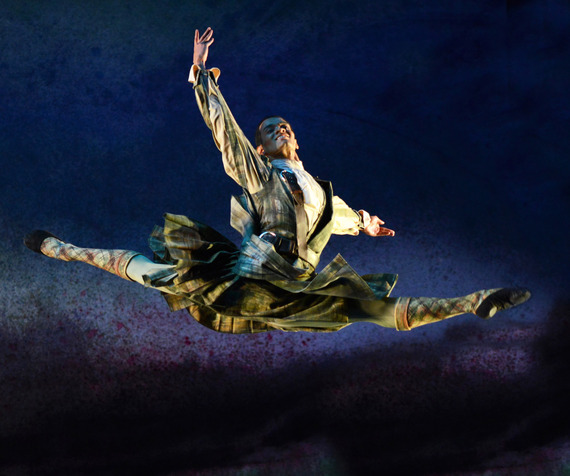 One hundred years after the start of the First World War -- a war waged with previously unheard-of aircraft and weaponry, whose unprecedented bloodbaths devastated entire towns and cities -- Birmingham Royal Ballet pays homage with a stunning triple bill of revivals that showcases British ballet at its musical best, its theatrical best and its stylistic best.

That works harking back to 1944 (Robert Helpmann's Miracle in the Gorbals), 1979 (Kenneth MacMillan's La Fin du Jour) and 1985 (David Bintley's Flowers of the Forest) easily summon up the torment and uncertainty of the 'Shadows of War' cast by the present conflicts in Syria, Gaza and the Ukraine attests to their power. 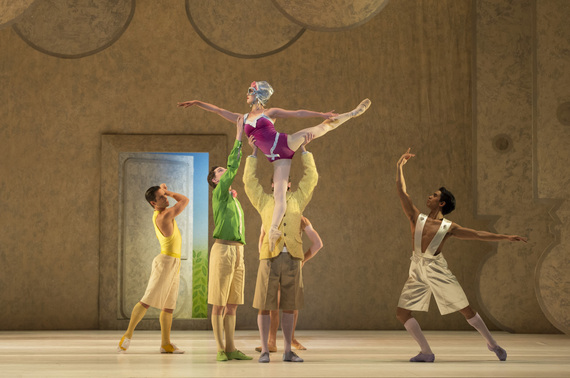 War was clearly the farthest thing from the minds of the Bright Young Things of the 1930's as they frolicked on the beach in La Fin du Jour, clad in fantasies of the sportswear of the epoch, in scrumptious shades of gelato with matching wigs in marcel waves ("like posh macaroons" pronounced a gentleman seated behind me.) The opening clockwork movement of the ensemble, however, suggests that they are part of a large and insidious machinery. The men are repeatedly frozen in sporting poses, from golf, archery, fencing, sailing, calisthenics.

Their rarefied, absurd world is defined by the spare set, designed by Ian Spurling and sunnily lit by John B. Read, with massive cut-outs of cartoon-like faces in profile, reminiscent of Jean Cocteau's pen and ink drawings, suspended over the stage and carving out the wings.

Through an open garden door enter two agile, neoclassical nymphs in swimsuits and goggles over swim caps, suggestive of sea and sky in their attire and in their sweeping partnered movement. Lead couples on Friday evening (César Morales and Arancha Baselga, Mathias Dingman and Karla Doorbar) and Saturday matinee (Yvette Knight and Tyrone Singleton, Céline Gittens and Brandon Lawrence) were elegant and beguiling; Gittens and Lawrence in particular stood out for the amplitude of her movement and the slinky ease of her transitions, and for his soaring, seemingly effortless jumps. 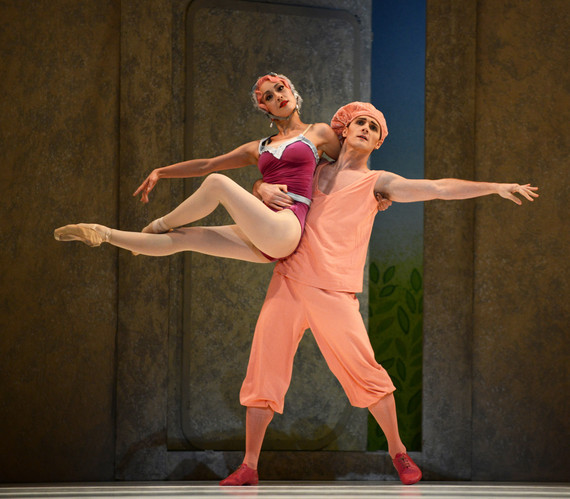 The first movement of Ravel's ravishing, jazz- and blues-tinged Piano Concerto in G Major comes to a crashing close, and as the slow, sublime second movement kicks in, its languorous melody floating over a melancholy bass, the two lead ballerinas pull their goggles over their eyes. Each now partnered by five men in a series of glacial acrobatics, these enigmatic aviatrixes manifest themselves as angels of death, serenely swooping, floating and fluttering and finally driving the men offstage in a series of inexorable bourrées.

The ensemble re-emerges to party in the final frenzied movement, bedecked in candy-colored evening wear. Echoes of Busby Berkeley cannot hide a growing unease and desperation, which climax in a heroic and peculiarly moving sequence of jumps for the men that take off from and land in a push-up position. The piece closes as abruptly as the first movement, with Baselga (Knight) shutting the door to the garden -- signaling a sudden end to this generation's frivolous, carefree life. 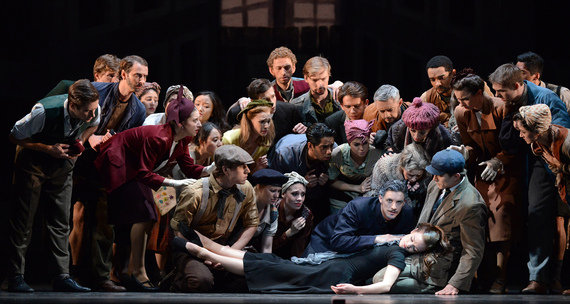 The recreation of Robert Helpmann's Miracle in the Gorbals by Gillian Lynne -- who danced in the original production -- is a blazing triumph of dance-drama, a tale of perfidy and redemption in a Glasgow slum of the wartime 1940's, whose denizens include a power-hungry priest, fishwives, prostitutes, buskers and street urchins -- all vividly brought to life with remarkable economy of movement, to a mighty score by Arthur Bliss punctuated by the sounds of strafing and air raid sirens.

Ballet employed to tell the story of ordinary people, of the poor and their daily struggles, of their manipulation by politicians and men of the cloth, recalls Twyla Tharp's recent attempt to recreate the same era and a similar theme in small town Louisiana. 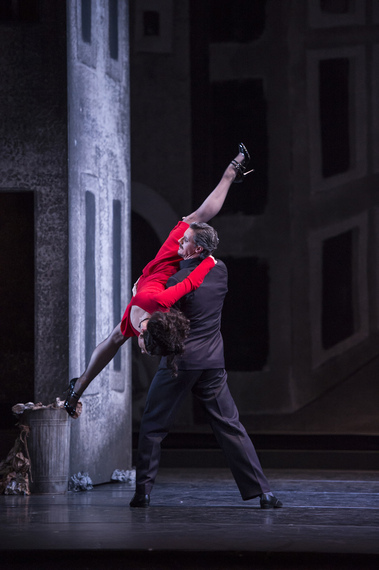 Iain Mackay's tortured priest seeks revenge on a charismatic Stranger (César Morales) who succeeds where the priest had failed in resuscitating a woman who had committed suicide (the luminous Delia Matthews). In his frustration, the priest turns to a prostitute (Elisha Willis) for comfort; he is later enraged when he discovers that the Stranger has converted her. The Stranger quickly amasses a following, but the priest spreads nasty rumours and turns the crowd against him, hiring a gang of thugs to assassinate him. There is great beauty in many scenes: the Stranger's resurrection of the suicide (Matthews arching through a glorious backbend); the breezy fiddling of a beggar (an unforgettable Michael O'Hare) while the priest is having his way with the prostitute; the vicious attack on the Stranger, which culminates in the slitting of his throat. 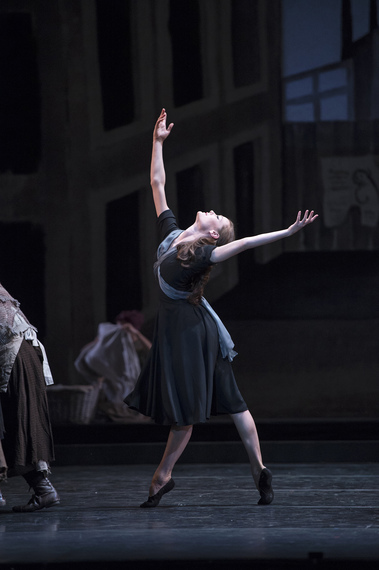 Christian symbolism is pervasive -- starting with the ship painted by Adam Wiltshire, after designs by Edward Burra, on the imposing frontdrop: chained in drydock at the Glasgow shipyards, the ship's name, "Rosario," is etched on its hull. The final image of the mournful beggar cradling Morales' corpse in his arms as Matthews and Willis (Mary and Mary Magdalen) comfort each other on the sidelines recalls the Pietà. Even the most hardened atheist could not help but be transfixed at the power of this story-telling, in which every detail resonates. 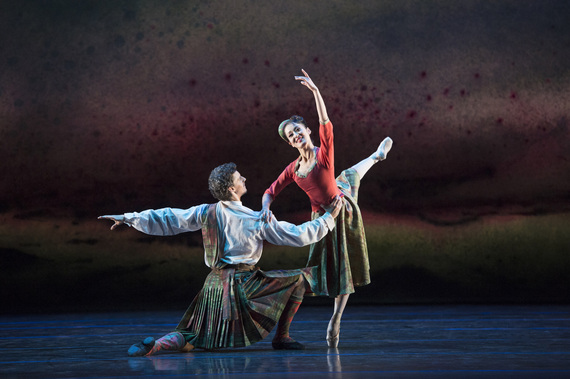 David Bintley's exuberant and stirring Flowers of the Forest echoes the Scottish themes in the music -- Malcolm Arnold in a gay mood for the first half, and lifelong pacifist Benjamin Britten rather more serious in the second -- without inflicting endless reels and jigs.

Hallelujah for the dashing men in kilts and the elegant women in ruched tartan dresses with silk underskirts -- though the women's costumes in the Arnold (dowdy skirts and airline hostess caps) are urgently in need of overhaul.

Changing moods are reflected not just in the score but in the glorious abstract painted backdrop by Jon Goodwin that evokes the Scottish highlands, slashed with a blood-red streak. The backdrop is variously lit to highlight the paler greens of spring, or the deeper blue-greens of summer or to suggest a stormy, blood-soaked battlefield. (Flowers of the Forest is the name of a Scottish folk tune which became a lament for the death of the "flower" of Scottish youth at the Battle of Flodden in 1513, in which James IV perished along with 10,000 Scots at the hands of the English.)

The witty, quicksilver petit allegro of the Arnold, including a very funny inebriated pas de quatre, turns somber and majestic in the Britten, as war looms. Sans narrative, the rigorously classical vocabulary, the score and mercurial backdrop convey context and emotion, at times a call to arms, at others a lament. Here a moving suggestion of soldiers coming to the aid of wounded comrades, there an understated, sorrowful lovers' farewell, elsewhere a couple comforting each other at the loss of a son. The close is jubilant, defiantly so, a blur of tartan against the summery backdrop, sparks flying under the ladies' pointe shoes.

Standouts among the terrific ensemble were Jamie Bond with his dazzling split jumps and turns, the fleet-footed Nao Sakuma, the elegant Yasuo Atsuji, the heroic William Bracewell, the beautiful and noble Delia Matthews and the splendid, unidentified fellow who on Friday evening landed a series of double air turns smack-bang into grand plié.

The English style -- lyrical, and free of excessive ornamentation, with a sense of curve and volume, not just line, in the attack -- was evident throughout the evening but nowhere more so than in the opening series of grands jetés executed by the ladies in the Arnold. Their upper bodies are energized but serene; they do not yank up the chest or snap the legs into a wider split at the height of the leap -- practices that send ballet teetering on the brink of circus. English ballerinas sail through a grand jeté, they do not explode like a mass of tulle shot from a cannon. (Not to diminish the attractions of the Russians and Cubans, who achieve formidable altitude in grand jeté with their powerful takeoffs, nor of the French, who land with a pillowy softness, as if on a terrain of marshmallows, nor of the Balanchinista Americans who stretch out their lines like supersonic fighter jets.)

Leaving the Hippodrome after Saturday's matinee, Ballet to the People stopped in at the Birmingham Museum and Art Gallery to bask in the splendor of the Pre-Raphaelites. But it was an enormous black-and-white photograph of two unknown soldiers -- a close up of two young men in uniform, jaunty and insouciant -- that grabbed her eye, the centerpiece of a poignant exhibit on the lives of the men from Birmingham who served in France, Belgium, Italy, Gallipoli and Mesopotamia between 1914 and 1918. 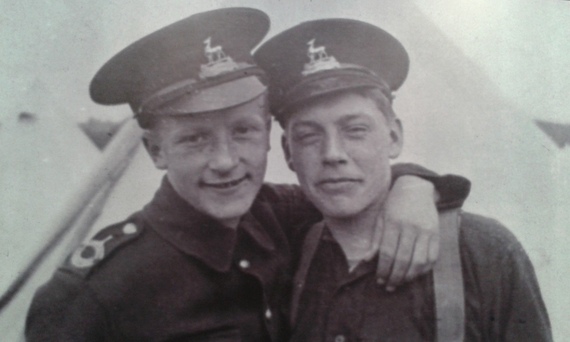 Although today's high tech, low body-bag warfare largely avoids the mass mobilisation of ground troops, we are regularly warned that our leaders may feel compelled to put "boots on the ground" (presumably with soldiers inside them.)

In program notes, Gillian Lynne recalls: "After World War II we performed Miracle all over Europe in bombed and wrecked cities..." May Birmingham Royal Ballet go on to perform the miracle of this program in the cities shadowed by our many global crises.

Birmingham Royal Ballet takes Shadows of War to Sadler's Wells Theater in London on October 18-19, and to the Theatre Royal Plymouth on October 28-29.