When college student Enrique Cervantes wrote an essay about seeing two people having sex in a car in front of his house, he never expected that it might shed light on a murder investigation.

However, that story -- submitted as part of an oral history of El Cajon, a city just east of San Diego -- may help explain the murder of Iraqi refugee Shaima Alawadi, and offer a possible motive for her family members.

Alawadi, a 32-year-old mother of five and an Iraq-born Muslim, was attacked March 21 in her home near Lakeside, Calif. She suffered at least six blows to the head, possibly from a tire iron. Fatima Alhimidi, her 17-year-old daughter, said there was a note found next to her mom's body reading, "This is my country. Go back to yours, terrorist."

Alawadi died three days later and, initially, there was speculation that it was a hate crime.

Further investigation hasn't confirmed that theory, but the release of an affidavit by the El Cajon Police Department on April 5 to the San Diego Union-Tribune reveals strife within the family. Alawadi was planning to divorce her husband, the document says, and Alhimidi had been caught having sex in a car with a 21-year-old Chaldean man some months prior.

Months before Alawadi's death, after being picked up by her mother, a police report said Alhimidi leapt out of the car while it was moving at 35 mph. "Police were informed by paramedics and hospital staff that Fatima Alhimidi said she was being forced to marry her cousin and did not want to, so she jumped out of the vehicle."

But beyond public records, Cervantes has brought a unique perspective to that sex scene.

A few months after the vehicle incident and two months prior to Alawadi's death, Cervantes wrote about seeing Alhimidi in the car for SoSayWeAll.com, a San Diego-based nonprofit that is currently collecting "a people's history of East San Diego County."

"The story was written before (the murder) happened," Cervantes told The Huffington Post. "I submitted and then found out that the girl's mother had been murdered."

The piece, "Her Skin, Brown Like Mine," appears on the site of the alternative newsweekly San Diego Citybeat, and details Cervantes' encounter with Alhimidi and her boyfriend, later identified as Rawnaq Yacub.

Cervantes said he saw two people having sex in front of his house in the middle of the day and called the police.

Before police arrived, Cervantes went to the car to warn them and saw a teenage girl in a hijab with a man who looked to be in his early 20s. His piece describes the encounter:

The guy saw me coming and adjusted his pants. The girl pulled a blanket over her legs and smiled, her cheeks blossoming into red. What the f***, I almost said out loud. She was wearing one of those things on her head that Muslims wear. It was light purple; it looked nice on her skin. Her skin was brown as mine. It looked nice with that shade of purple, like an Egyptian princess.

Cervantes said the couple stayed and eventually the police arrived. Shaima Alawadi also came to the scene to take her daughter away and was seen screaming at the girl, in part, because the Alawadi family is Muslim and Yacub was Chaldean, a Christian Iraqi.

"They all left and later we found out that the girl had jumped out of the car," Cervantes said.

SoSayWeAll director and Huffington Post blogger Justin Hudnall said he was shocked when he read the story.

"It was an eerie moment when we realized we had gone from reporting on the past and collecting histories, to being in the thick of an unfolding human drama making international headlines," Hudnall told The Huffington Post.

The murder remains top news in San Diego and Hudnall said Cervantes' account sheds light on the relationship between Alawadi and her daughter as well as that between Alhimidi and Yacub, 21. The story also possibly contradicts Yacub's claim that Alhimidi and he were "just talking" that morning.

"Enrique's story, combined with the contents of the accidentally released police affidavit, suggests that the El Cajon Police Department may have been aware from the very beginning that Alawadi's family was, using their own words, 'in turmoil,'" Hudnall said. "They were aware of Fatima's impending arranged marriage with her own cousin, her relationship with a man outside of that arranged marriage, and Shaima's intentions to divorce her husband. It begs the question, why then did the El Cajon P.D. and the FBI allow the family to take her body back to Iraq, where extradition could be difficult if not impossible?"

Hudnall said if Alawadi's murder turns out not to be a hate crime, then the note found next to her body may have placed there by a killer trying to throw off a murder investigation.

"That struck me as a very cynical and self-aware thing to do, and makes us (wonder) how much is truth and how much is manipulation of stereotypes," he said.

Cervantes may have shed new perspective on the case, but he's not necessarily happy about it.

"I was almost ashamed of writing the story, even though I was trying to express some form of solidarity," he said. "I almost felt like, 'Man, you're doing something creative out of someone's suffering and something bad happening,' and I feel bad about that." 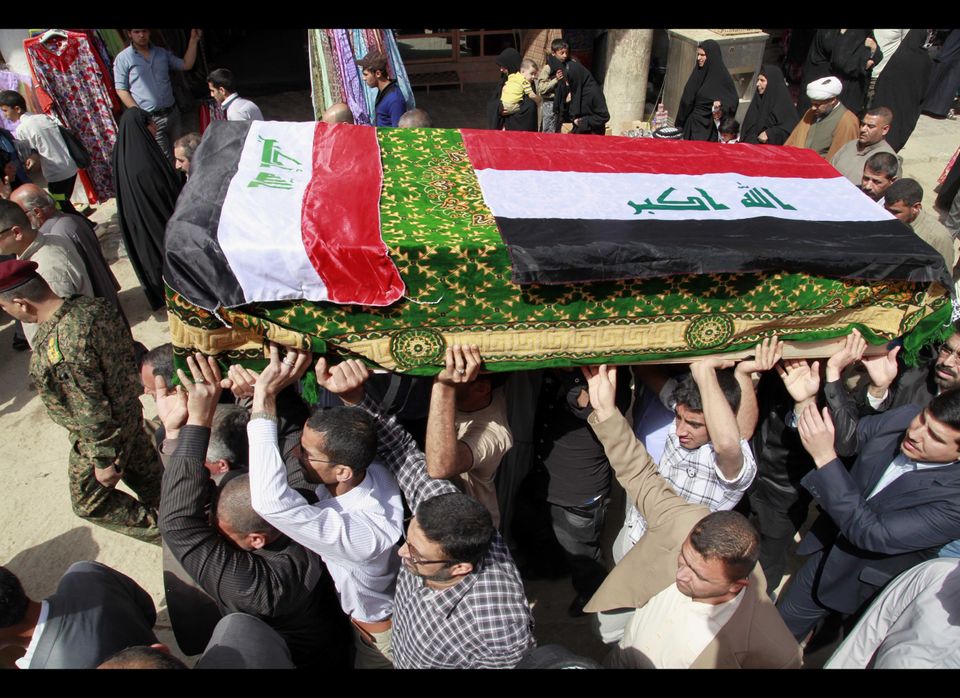 1 / 19
Mourners carry a coffin draped with Iraqi flags during the funeral procession for Shaima Alawadi in the Shiite holy city of Najaf, 100 miles (160 kilometers) south of Baghdad, Iraq, Saturday, March 31, 2012. Alawadi, an Iraqi-American woman found bludgeoned to death in her California home last week, with a threatening note left beside her body, was buried in her native Iraq on Saturday.
AP Photo/Hadi Mizban