The battles between East and West Coast have taken us from hip-hop, to higher education, and now onto fast food, with multiple champions sprouting up on either side to vie for the title of best regional chain. But in this case, the challengers-apparent are Shake Shack, the New York upstart, and In-N-Out, the California heavyweight, and -- being the gentlemen that we are -- we decided to state our cases on both sides of this hot burger issue. In the end, there can be only one winner, so let us know who that is in the comments, and the loser will be banished from Thrillist, or just embarrassed during happy hours. 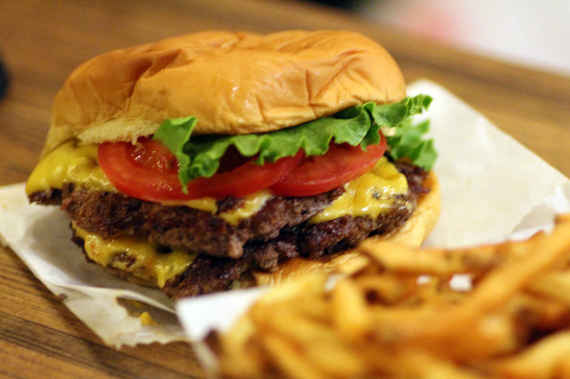 Being a burger lover, you hear a lot about In-N-Out and how it's supposedly the best fast-food burger in America. Yeah, it's got legions of fans (read: Californians, who're always unscrupulously adamant that their state is the best at everything despite being a place where Gwyneth Paltrow's word is taken as law), a "secret" menu that's about as clandestine as Joe Biden's sexual history, and -- wow! -- hats, and those things can't possibly be denied, right? Wrong, dear reader; In-N-Out's got nothing on New York burger-slinger Shake Shack, and here's why.

You're handed a plastic tray by a grinning white-and-red-clad twentysomething wearing a paper hat in a pristine 1950s-era hospital setting. Do you take it without first questioning your own sanity? No, you don't.

More: Testing the secret menus at 8 chains, from Chipotle to Shake Shack

Proponents of In-N-Out simultaneously laud the simplicity of its standard menu ("Just burgers, fries, sodas, and shakes!") and the endless customizability of its increasingly bloated "secret" one ("Should I get animal-style, monkey-style, or macaque-style?") made up of obscure grilled and fried stuff they had lying around. You can't have it both ways, In-N-Out!

Secrets were meant to be kept just that -- you should've learned that in fourth grade. Now everyone's in on it and there's no sense of exclusivity. As for Shake Shack's secret menu, well... we've already said too much.

Shake Shack's juicy burgers are made of a blend of genuine Pat LaFrieda brisket, short rib, and sirloin that are delivered fresh daily and griddled to a paragon of crispness. They are unequivocally the best fast-food burger patties on the market. In-N-Out's burgers are "100 percent pure beef" and are caked in spices to mask their innate mediocrity.

Despite all its "secret" menu additions, it still has fewer offerings.

Shake Shack's menu, in addition to their dope burgers (including an actual vegetarian burger -- take that, In-N-Out grilled cheese!), fresh-cut fries, shakes, and sodas, also has hot dogs, frozen custard ice cream, concretes (you can even design your own), beer, wine, and an entire section devoted to treats for its customers' dogs. Who's a good burger joint? You are!

It's less of a community.

You'll find In-N-Outs dotting the Western landscape, oases of burgers and fries housed in standalone restaurants distinguished by their trademark golden arrow signs. And while that's nice and all, Shake Shack is even more integrated into the rich patchwork of New York (and everywhere else it has popped up); it's in our parks, our baseball stadiums, our airports, our malls -- and in all of these places, it's committed to serving the same incredible burgers, and doing the same good for the people.

Plus, Obama eats there, and that guy seems cool.

Read on to learn why another Thrillist writer believes In-N-Out is the winner in America's battle for burger supremacy!

15 Things You Didn't Know About Five Guys Burgers and Fries

The Best Steakhouses in America