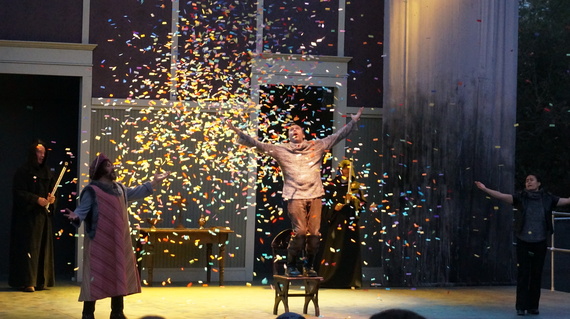 Starting Richard III with a scene before the famous iconic opening speech "Now is the winter of our discontent made glorious summer by this sun of York" is a very bold move for a Shakespeare company, but the Independent Shakespeare Company of Los Angeles prides itself on being a modern company that embraces a living breathing Shakespeare that is as vital and exciting today as when the Bard was penning his plays for the people back in the late 1500s. Using a late 1600s adaptation of Shakespeare's Richard III by Coley Cibber (which became the most produced play in the world for the next 200 years), they present a work that feels fresh and invigorated. David Melville, who plays Richard III and Melissa Chalsma who directed, and who are both co-founders of the company that perform in Griffith Park, restored much of the text of Shakespeare's original, while keeping the streamlined structure of the abridged version. The resulting condensed story makes the drama more understandable for the layman. That they add in a few scenes from Henry VI helps as well, in fact starting the play with the very scene where Richard kills Henry which starts Richard's saga by putting his brother on the throne. All this careful adaptation shows not only ISCLA's love for Shakespeare's originals but their dedication to making exciting theater.

"It's been said that Richard III is a play about people having strong emotions about things that happened in other plays", says David. "And for those of us (meaning probably all of us) who aren't up to date with the war of the roses and mid 1400s English throne drama, the history in this play gets particularly complicated."

It's also Shakespeare's eighth play in a eight play story.

"This is a very clear and powerful representation of the play, which as a full text would run three and a half hours. If you had been living in his time, and were watching these plays as they were written and performed, you'd understand the histories as they were told and remember them," says Melissa Chalsma, the director and other co-founder of the company. "Seeing this play today is like coming into Game of Thrones in season six. It's normal to look around and not be sure what's going on. This way we're able to streamline the work with an adaptation from the same period."

The cast as always is excellent. David' Melville's Richard the Third is unusually sociopathic and comical. He brings an unexpected delight to the performance where other actors have chosen to bring a brooding melancholy. But his Richard loves himself and embraces the line the night before his final battle; 'Richard loves Richard!' and electrifies the stage with a mesmerizing performance. 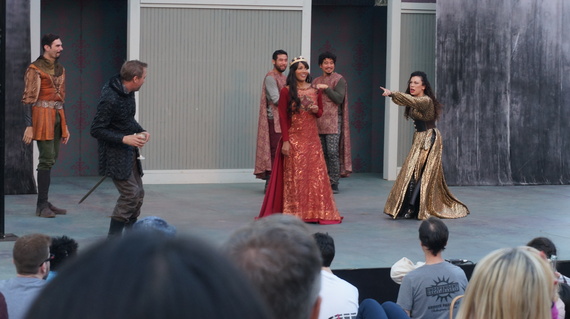 Other stand outs of the show - Aisha Kabia as Elizabeth, Edward's wife who is progressively distraught as she loses her husband and two children to Richard's homicidal intent was magnetic, Kalean Ung, as Margaret the widower of Henry Sixth, held the audience spell bound in her grief and rage, William Elsman as the Duke of Buckingham, Richard's aide de camp in orchestrating his throne grab was the perfect soldier blinded by his own ambition, Evan Lewis Smith had the charismatic regal bearing of the next king to come as Earl of Richmond and Joseph Culliton as Lord Stanely, and ISCLA veteran, who always provides a rock solid performance in every supporting role I've seen him in.

The troupe's enthusiasm and commitment never wavers as they run through the audience or battle on stage. Incorporating a rock band on stage provided electric interludes that kept the energy high. 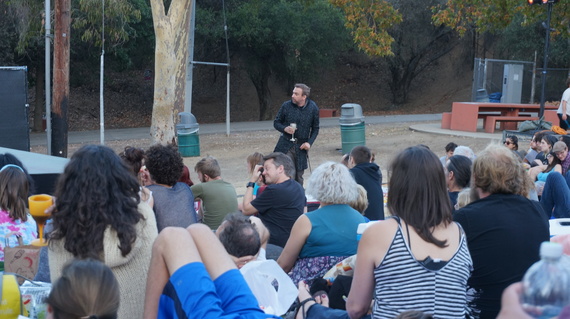 Richard III (David Melville) walks off stage and wanders through the crowd which often happens in ISCLA shows.

Their stage looked particularly modern and well equipped this year, which David Melville thanked the Ahmanson Foundation for a grant after the show "so we could have lights over the stage" he pointed out. But it's a testament to this company's 13 year commitment to their continued delivery of a festival in LA that helps the city be one of the great artistic environments that it is. This extraordinary company survives on audience donations to put on professional theater every night which they charmingly ask for at the end of each show as each company member stands on stage to greet the audience and provides an opportunity for financial support. "We look like we are well funded, but we are entirely grass roots every year," David has told me. 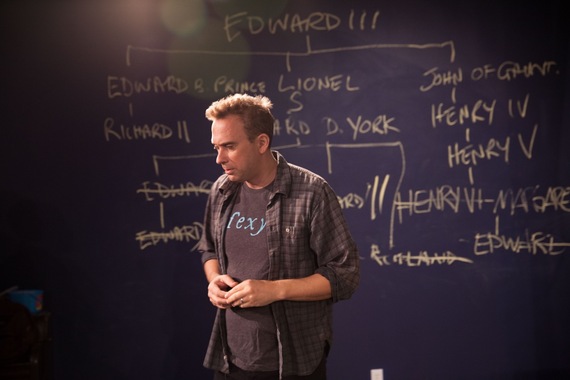 ISCLA also has a continuing winter program in their studio space that I took advantage of last year when they produced "Strange Eventful History" - a devilishly clever original production about a theatrical company's rehearsal which collapses as they all try to figure out the extraordinarily complicated histories of English throne snatching they're trying to perform during the war of the roses. Until one company member comes forward, explains it all and with each explanation the troupe shifts into scenes from the very Shakespeare plays they're explaining. The comedy and breaking of the fourth wall balanced the bloody tragedy between the houses of Lancaster and York on stage quite well. The ultimate breaking of the fourth wall was actually writing on one of the walls itself, making a massive family tree they drew in chalk as the show progressed, to give the bloody family lineage clarity and which made for the perfect set design choice.

This weekend is the final performance of Richard III, it's a daring delight and I urge you to see it. Take advantage of one of LA's best cultural arts events and attend the Independent Shakespeare Company of Los Angeles. The company continues their summer season next weekend with their second play of the summer The Tempest which runs through September 4th, 2016.

For more information or showtimes for the Independent Shakespeare Company