Shakila Ibrahimkhalil is an Afghan journalist. During the time of the Taliban, she was forced to withdraw from her journalism studies and get married. Four years later, she suffered the loss of her husband. Today, she works as a journalist for Moby Group, the largest media company in Afghanistan, where she has been working for the past seven years. 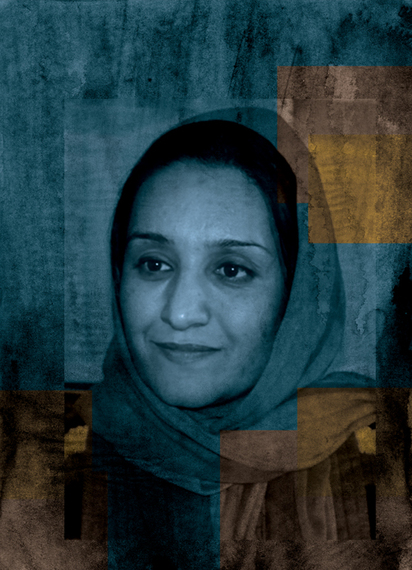 Under the Taliban's rule, I was denied the right to study and although I was very young, my family forced me to marry. When my husband was killed, his family pulled my children out of kindergarten and away from me: they didn't think I should be studying and working. Fortunately, following mediation by my family and the elders, they returned my children to me.

What are some important achievements in Afghanistan since the time of the Taliban?

Freedom of speech and the media; the presence of women in the media, in schools, and in other educational facilities; representation of women in the Parliament; the free movement of young people in the city: these are all important achievements. Such things were unimaginable 12 years ago. Human rights institutions that enable women to raise their voices are also very important.

The media in Afghanistan is making an impact on the government, and on the world: this is a big change. Seeing the faith people put in the media makes me thoroughly appreciate my work. The Sahar Gul affair, the tortured Afghan child bride, is a clear example of a story that captured the attention of the international media and created a build-up of pressure to protect her rights.

Also, although there are a host of related problems and challenges, the holding of elections is a new phenomenon in Afghanistan.

My biggest fear is to lose the gains we have made. I am also afraid of going back to civil war. We have made so much progress and I am afraid to lose it: children going to school, young people studying and playing sport, women working. We have fought too hard for our freedoms to lose them again.

What are the three biggest challenges facing Afghanistan?

The first challenge is insecurity. The second is the absence of the rule of law and lack of access to justice for women. The third issue is administrative corruption, which heightens insecurity and injustice. Reprehensible traditions and customs, which prohibit girls from studying and treat women as the 'second sex' is a very big challenge. In some regions, men do not even allow women to go to the doctor.

Would today's Afghanistan allow schools to once again be closed to girls and women excluded from social participation?

The people of Afghanistan would never allow it. But things could be different if we go back to war.

Can you tell us about any specific occasions where the human rights of a female family member or friend were violated?

I have a close friend who was pregnant. A few months ago, her relationship with her husband seriously deteriorated. The husband's family wanted her to abort her child; they had already taken away her other child. The family wanted a divorce between my friend and her husband. The problem was finally resolved, but only through the mediation of my family and I.

Governments in Afghanistan have always used women as symbolic tools. Women who work on the High Council of Peace and as Commissioners on the Independent Elections Commission do not have real power to make decisions. There is not a single female judge on the Supreme Court.

Furthermore, women do not have access to justice. Reprehensible traditions and customs, the rebellion of armed insurgents against the government, the absence of the rule of law and the lack of access to justice for women prevents progress on women's rights.

What solutions do you see for advancing women's rights in Afghanistan?

Women must have the right to make their own decisions, wherever they are. The president has two vice presidents. One of them should be a woman, and a woman who has the power to make decisions. People who perpetrate violence against women should be brought to justice before the courts and punished. Women should have more access to education and more employment opportunities should be created through programs of affirmative action.

What do you wish for your daughter?

I hope that she will be able to become a doctor -- that is what I wished for when I was a child.

I wish that we lived in a peaceful and safe environment, where my daughter and other girls could study and achieve their goals.

There is no discrimination in our family. I studied and I worked, even when I had children. When I see women I am close to experiencing problems, I always try to intervene and help to resolve their problems in a way that respects their rights. In my work as a journalist, I have sought to highlight the importance of women in society.

Do you have a specific message to share with the world?

We are on the eve of the presidential election. My message to women is that they should participate in the elections and make use of their right to vote. I ask my brothers to respect the right of women to vote just like men, and to choose their own candidates. I ask all the candidates -- regardless of who is elected president - to work for security and stability for women, to fulfill their election promises, and to serve the people of Afghanistan.