My grandfather David Beatty Stewart, my mother's father, died in a 1924 car crash along with Mom's mother and little brother; Mom (age 13) was the only survivor. So far, I have been unable to trace Mom's father's father, probably also named David Stewart and born possibly in Sumner or elsewhere in Kansas... They did not vote, probably didn't belong to a church, and census takers may not have reached them on their remote farms.

So is there another way to trace these mysterious ancestors? ~ Sharon

Our first thought was to look for a newspaper account of the accident. Colorado does have a collection of newspapers online, but unfortunately it ends in 1923. We turned to History Colorado, and librarian Sarah Gilmore was able to help us out in a big way. She sent us copies of three articles about the accident (which actually took place in 1925 rather than 1924). 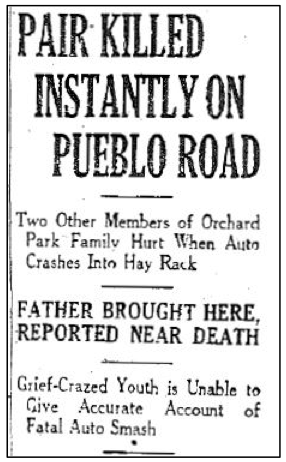 The headline of the article that ran on 13 December 1925 tells the sad tale: "Pair Killed Instantly on Pueblo Road," while two other family members were severely hurt in the crash, including your grandfather and your mother. The article itself is full of facts that will help your research. But it is also full of heartbreaking details. The family lived in Orchard Park and were on their way home from Christmas shopping. An older son, M.A., was driving. Daisy (your grandmother) and 6-year-old David Beatty, Jr. were killed instantly. Your grandfather, David Beatty, Sr., sustained internal injuries and would die the next day. M. A. (who was 17) was not injured; his sister Avia (age 14, your mom) sustained serious, but not fatal, injuries. The car ran into an empty hay rack, possibly because the car's lights were dim. No one was found to be at fault.

From the articles, you can learn the family's names, their ages, place of residence, and death details, including the name of the funeral home where the bodies were viewed. A good next step would be ordering death certificates from the state of Colorado. Death certificates often list the names of the deceased's parents, which could take you back another generation on your grandmother and grandfather's family trees in one simple step.

We couldn't order the death certificates without a signed release from a family member, but we came across another clue while we were searching for newspapers online that mentioned the accident. We found an online family tree on Ancestry that includes a David Beaty Stewart and the following detail: Death 12 December 1925 Avondale, Pueblo, Colorado.

You are looking at a profile about your grandfather, one compiled by someone to whom you are somehow related. So not only have you, through this one document, found additional information about your mother's father, but you have also most likely found a relative (or a set of relatives) in the person who built this family tree.

Online trees sometimes get a bad rap, and they are only as accurate as the research skills of the person who created them. But they can be a great help to your research because so many of them are well researched with sources attached. These online family trees provide helpful starting points for anyone just beginning the long search for their ancestors. They are full of time-saving hypotheses to examine and test, giving you a leg up on the search process.

Filling Out a Family

We decided to take this tree as a jumping-off point and see what other records--and ancestors--it might lead us to. According to this tree, David Beaty Stewart was born 15 May 1875 in Rushville, Rush, Indiana. He was married to Daisy Dean Horn, who was born on 11 October 1876 in Wellington, Sumner, Kansas. They appear as a couple in the 1910 U.S. census.

We learn a lot from their 1910 census record that corresponds with what you already know about your mother's family. The family is living in Sumner, Kansas. The household includes David B., Daisy, sons Cecil and Myron (most likely the M. A. listed as the driver), and David's brother Bunker.

Another useful clue we get from the 1910 census is the place of birth for people listed in the census and for their parents. According to the census, David was born in Indiana, as was his mother, and his father was from Kentucky. Daisy was born in Kansas, and her parents both hailed from Ohio. We also learn that David and Daisy have been married for 9 years and have lost one child. Both David and Daisy's place of birth are consistent with birthplaces listed in the tree, though the ages are off a bit.

With just this one record, your family tree is already starting to take shape, and we can start crafting our searches based on what we now know.

Our next step backward is looking for David and Daisy in 1900. They haven't married yet, so we'll be looking for them on their own, possibly living with their parents. We had no luck with David, so we tried Bunker. Again, nothing. The tree gives their parents' names as Robert and Malinda, but they didn't turn up either.

We had more luck with Daisy. We found a likely match in Wellington, Sumner, Kansas, in the 1900 census. She's a bit older than the 1910 census says she is (23, born in October 1876), but her parents, Henry A. (born May 1843) and Minerva (born October 1839), are both listed as being born in Ohio and have been married for 29 years. Her maternal grandparents come from Pennsylvania, while birthplaces for her father's parents are listed as unknown.

We have a couple of places we could go from here. Almost the entire 1890 U.S. Census is missing, so our next census going back is 1880. Since David is the right age to have registered for the WWI draft, we took a quick detour to look up his draft card, which shows him living in Pueblo, Colorado, in 1918, married to Daisy. He lists his date of birth as 15 May 1774. Again, the years are off by one from the data in the family tree, but the day and month are the same, and we know they're in Colorado, where the accident took place. It's also consistent with migration patterns, as people were moving from the Midwest into Colorado at this time.

From there, we went back to 1880. We found David and Bunker living with their parents, R. S. and Malinda, in Sedgwick, Kansas. We find the couple again in 1870, this time living in Richland, Rush, Indiana. David isn't born yet, but Bunker is there, and Rush, Indiana, squares with David's birthplace in the family tree and with later census records. 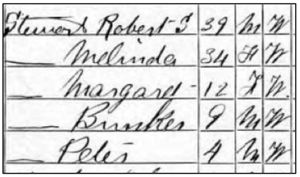 According to the tree, David's parents are Robert Stewart, born 2 October 1830 in Kentucky, and Malinda Kincaid, born in 1836. So far this tree is turning out to be a pretty good source. But can we find any documents pertaining to Robert and Malinda?

We found a Robert Stewart of the right age, born in Kentucky, living in District 97, Rush, Indiana, in the household of David B. and Mary (or Nancy) Stewart on the 1850 census. So was David Beaty named for his paternal grandfather? And what about Malinda? There is a Malinda Kincaid living in District 97, Rush, Indiana, in the household of Andrew and Malinda. That's not conclusive evidence, but it is promising, and it helps build a tentative case, a hypothesis that can be tested. A Robert S. Stewart and Malinda Minkhead appear in the Indiana, Marriage Collection, 1800-1941, with a marriage date of 10 March 1858 in Rush County. It would certainly be worth ordering the original record to see if Kincaid might have been transcribed incorrectly as Minkhead.
Mis-transcriptions are common in all documents, including the federal censuses, so double-checking where possible is always advised.

A number of states took state censuses in between the federal censuses. Kansas was one of those states, and Daisy appears with Henry A. and Minerva in an 1895 Kansas state census--David's family appears as well, living about 30 miles away. The 1880 federal census confirms Daisy's middle initial, D., and lists two older sisters as well: Zoa and Adda, both born in Ohio.

The family is still living in Wellington at this time. We know from the 1900 census that Henry and Minerva were not married until about 1871, so they probably aren't together in 1870, but we now know that the most likely place to look for them is in Ohio. While searching for Henry, we came across another record that opened up more possibilities in his past. A Henry Horn living in Wellington, Kansas, in 1885 appears in Kansas, Grand Army of the Republic Post Reports. This Henry was born in Hancock County, Ohio, and joined the Union Army in 1863.

So where do we go from here? Henry is proving difficult to track down, and we need Minerva's maiden name to go back on Daisy's line. And what about Robert and Malinda's parents on the paternal line?

Well, fortunately we found still another tree online with a David Beaty Stewart, born 7 July 1798, Kentucky; death 14 February 1876, Rush County, Indiana. He was married to Margaret Wilson. From there, the Stewart line just keeps going, back to Robert Stewart (1768-1829) and Margery Beaty (1774-1853), and then back to Thomas and Agnes... 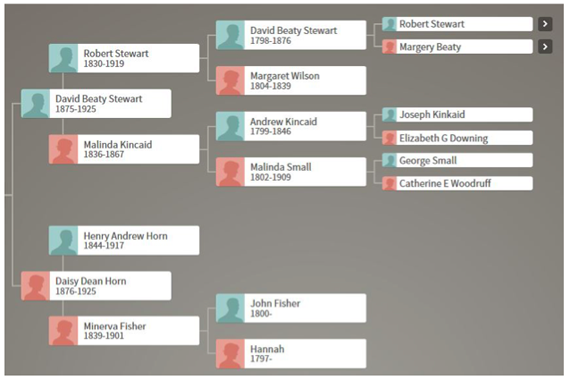 You get the idea. The more generations you find, the more leads for you to check out. Your search for your ancestors shows the enormous value that family trees already posted online can have. Sharing your family's information can help you, and your unknown relatives, find ancestors and links none of you knew you had. It's very exciting!