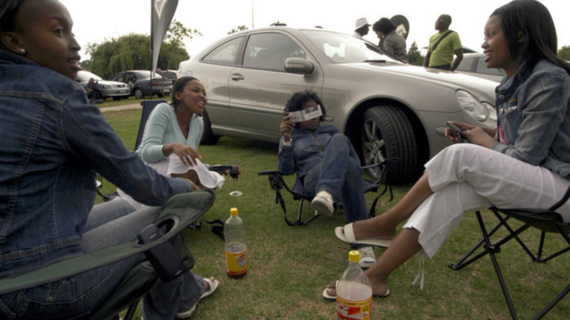 The myth of conspicuous consumption

In the media, the more affluent members of the black middle class are often portrayed as conspicuous consumers, so-called "Black Diamonds" who earn between R16,000 and R50,000 per month, have a tertiary qualification, a white-collar job and are under the age of 44.

The trouble with this categorisation is that it's apt to mislead and fails to capture the experience of being black and middle class.

For a start, the idea that the black middle class engages in consumption for its own sake needs to be unpacked. Consumption patterns among blacks are complicated by multiple considerations including race, class position, and personal relationships.

The class identity of one's parents is a major factor, as is the need to belong to one's community (black) and the need to navigate a (hostile) world in which racial identity still matters.

Being black in a racialized South Africa

The complexities of being black and middle class cannot be understood without paying careful attention to South Africa's racial history.

For example, members of the black middle class with working-class parents often have been required to overcome the economic ills of apartheid engineering. For this reason, measures of wealth or earning capacity can easily mislead, especially given the number of financial obligations members of this group take on as they attempt to overcome the past in their wider families. These demands are reflected in high debts experienced by the black middle class.

This confirms that the consumption of the black middle class is strongly linked to the need to correct an historical asset deficit. The high debt that accompanies this, coupled with high rates of retrenchment and increasing unemployment, puts the new black middle class in a perilous position.

How do you define the middle?

In addition, what is considered "middle" depends on the viewpoint of whoever is making the claim. This makes the concept of the middle-class incredibly slippery. And categorisation of this type buys into a history of race and knowledge production in which the experiences of blacks were fixed and flattened so as to facilitate the project of colonialism and apartheid.

Unlike whites, blacks were forced to live among blacks irrespective of their class position. This continues to influence earning power, wealth creation and the reluctance to self-identify as middle class.

The experiences of those who grew up in black middle class households shows the tensions between race and class, where class positioning is not as simple as a measure of ones access to class privilege.

The middle class position becomes precarious for blacks as they engage in "white spaces", because in these spaces they are defined as the "other" middle class. They experience this through barred access and the call to constantly explain themselves.

Reflecting on his own experience, Mangcu has also observed that although he shared the privileges of being a professor at UCT:

... to many white people on the streets I am a breed apart. I would have to announce that I am a professor before I am treated with respect.

Class in racialised contexts is experienced as an uncomfortable and shifting identifier. Despite democratisation and the growth of the black middle class, it is premature to talk about the growing importance of class over race.