Do you know the story of the runaway horse and rider? An onlooker shouts: "Where are you going?" The rider shouts back: "I don't know. Ask the horse." We need to understand the direction we are letting ourselves be dragged by screaming demagogues. Or are running towards, ourselves; a very ugly scene, a dangerous, deadly dance with intolerance as our chosen partner.

I have danced, in a very different scene, with Anne Frank, who was destroyed by hate.

Not just with the adolescent Anne Frank we know from photos before her family was discovered hiding in their secret annex, and she was taken to suffer and die at age 15, along with 11 million victims of the Nazi genocide.

In my imagination, I danced with Anne in her thirties, sixties, and the age of 86 -- which she might be today -- if she had not been irrationally despised and lumped into a category labeled "Jew." This label was all that was needed for her killers to believe -- because they were methodically taught to believe -- that the world would be better if she vanished into smoke.

I can imagine Anne, dancing at 86, because I've had the pleasure of being in settings in which quite elderly folks are up, and dancing, joyfully. I can easily picture her, wearing the beloved burgundy suede shoes she wrote of so movingly, with a sparkle in her eyes, relishing the long, rich life I ardently wish she could have known.

You can probably picture Anne Frank -- one of the most famous women in the world -- but you may not be able to picture Yusor. Here is a wedding photo of her dancing, that she and her husband, Deah, did not live long enough to ever see delivered from the photographer. They were murdered just six weeks after they married. Also, hear Yusor's voice, and watch her make a free throw shot -- facing backwards! -- here.

If your heart doesn't break when you view this, and then picture her, forced to kneel beside her sister and husband, before they were shot in the head, then I feel grief for whatever has happened to enable you to feel complacent about such human destruction and loss.

I would have been thrilled to have danced at Yusor's and Deah's wedding. I've celebrated weddings of many cultures and religions. In poignant imagination, however, I was dancing in a different scene. I was dancing with evasive shadows; hazy, smoky mirages or spirits, of both Yusor and Anne, undestroyed.

I had the honor of receiving the Spirit of Anne Frank Award, for my work, bestowed by the Anne Frank Center, USA, an affiliate of the Anne Frank House, in Amsterdam. When I first read Anne's diary, as a young Jewish girl, myself, I was possessed with the question of whether I could have had the courage of the non-Jewish friends who supported her family in hiding, at the risk of being, themselves, tortured and killed.

Anne's story calls us to strive to be allies -- "upstanders," not bystanders -- especially for groups other than "our own," whenever they are designated and targeted as "other." I feel compelled to fight bias, and I attempt to express some of what Anne might, if she were observing our world today. Since the early days following the attacks of 9/11/2001, I've been consumed with concern for innocent people -- Muslim, Sikh, Hindu, Arab, including Arab Christian, South Asian and others -- being stereotyped, teased, bullied, harassed, assaulted, and murdered in irrational backlash.

The special issue of Time magazine, the week of those attacks, closed with an essay that called for "purple American fury" and for "relearning hatred." It exhorted the U.S. to relinquish its "messily tolerant" norm. When this venerated publication printed rallying cries for wholesale hatred of vast swaths of humanity, I thought that the towers of civilization were truly falling, along with the twin towers. 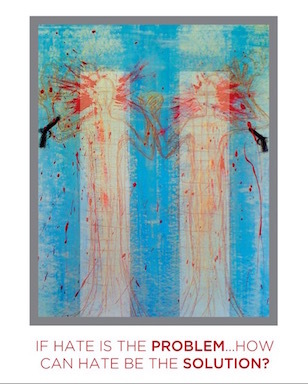 I begged many editors and reporters to tell the stories of innocent people who were victims of smears, mayhem and murder, in the hate-backlash following 9/11. I wrote, spoke, and shared stories of the innocent Muslim and non-Muslim murder victims, whose families I came to know, and now deeply care for. I warned, then, that the climate was chilling and frightening. Yet I am utterly stunned and horrified at the viciousness of smears now saturating our culture.

I want to ask everyone garnering votes, fame, and wealth by smearing all Muslims, whether they have any concern for the vast numbers of innocent people who are impacted or destroyed by their vitriol; any concern for the incendiary fuel in which they are drenching our culture.

I want them to read Islamophobia; Why Care or Take a Stand?, and then answer the same question again. I wrote and then rewrote this piece, as the need for it continuously deepened. An earlier version garnered comments including, "This should be mandatory reading in schools", and, "The next Anne Frank, hiding in an attic, will be wearing a hijab." This comment seemed horrifyingly prescient of Yusor's murder.

Yusor was not in hiding, and she wore a headscarf of her own volition. But she knew, as do all Muslim women who courageously wear the hijab, that headscarves function -- in some respects, as the yellow stars Jews were compelled to wear -- as we are increasingly told to view such women with contempt and suspicion. Under the hashtag #perserverance, Yusor wrote of the "daily test" wearing it brought in this world. Yusor's and her sister's scarves made them the visible and potential targets they became.

I want to transform perspectives. I often say, in programs and in print, that, "It is not a crime to be born into a religion" and, "Just because people scream something does not make it true." And that -- just as we are susceptible to the dictates of fashion -- we also easily absorb, and then trumpet, "fashionable attitudes." There are always those who masterfully manipulate the media. Campaigns that marginalize entire groups of people make wholesale destruction increasingly possible, even acceptable.

Our response, or our current indifference, to Islamophobia, and xenophobia is history in the making. How will we look back on the choices we are making now? How can we prevent hate and "purple fury" from horrificly ricocheting from one corner of the world to another?

I try to create transformational resources, including this piece, and programs for schools, corporations, faith communities, and elsewhere; for people to deeply consider how this issue is absolutely core to our culture today. I want to combat the scourge that is normalizing hate.

I believe that is what the Spirit of Anne Frank Award demands of me. Calls for mass extermination of Muslims abound in comments and commentary, throughout today's media. This, and the resulting destruction directed at innocents, extols a horrifying vision.

Anyone calling for, and justifying, hatred of entire groups, is wishing for apocalyptic and hellish scenes of suffering. Results of such exhortations include shotguns aimed at the beautiful heads of Yusor Abu-Salha, her husband, and her sister; or the hideous murder factory of Auschwitz. There is stark contrast between such images, with the innocence and merit of the victims. We need to remember this contrast, and clearly assert what sort of world we want.

I want a world in which I might actually and joyfully dance with the 86-year-old Anne Frank and the 22-year-old Yusor -- alive -- as they should be. We have to work, for the vision we desire, to prevail. My vision is of scenes with mixed-up groups of families, friends, colleagues, and whole communities, working together, celebrating simple joys together, as the extraordinary legacy of these victims exemplifies.

There will be more victims of Islamophobia and xenophobia, which has already claimed many innocent Sikhs, Hindus, South Asians, Arab Christians, Muslims and others. We must act, so that those with whom we share our world do not become more names on a long list of those irrationally destroyed, by people who believe hatred of entire groups, is a solution to hatred perpetrated by disparate individuals.

If hate is the problem, how can hate be the solution?

Hate is not my answer. Is was not Anne's, nor Deah's, Razan's or Yusor's. I don't believe it is yours'. What is your vision for co-creating a world of peace and co-existence, your thoughts on how to make this vision reality? What part will you play? None of us have to do everything. But we all need to do something.

Anya Cordell is a speaker, writer, activist, who dances regularly in 5 Rhythms, Open Floor, and social dance settings. She is a recipient of the Spirit of Anne Frank Award, bestowed by The Anne Frank Center USA, and author of RACE: An OPEN & SHUT Case which unravels presumptions of what we call "race"; named among the "books to change your life" by N'Digo magazine.

She has passionately countered post-9/11 hate-backlash against Muslims, Sikhs, Hindus, and others. Articles include "Jessica Jones, Superhero, vs. Donald Trump, Islamophobia, Xenophobia, Hate and Bullying","Would You Let a Muslim Save Your Life?", "Sikhs Bearing Pizza", and "Hate Speech Against Muslims Incites Violence".

Her programs for children through adults tackle "appearance-ism", racism, xenophobia, Islamophobia, and all stereotyping. See www.Appearance-ism.com

Artwork and photo by Anya Cordell