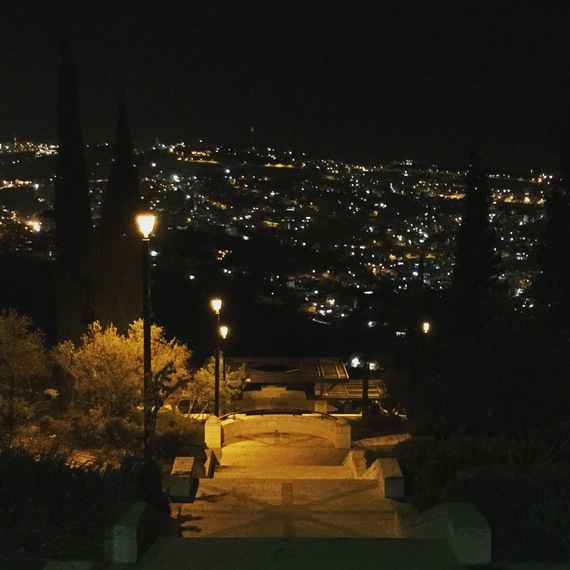 For as long as I can remember, I've longed to visit Jerusalem.

To see the places where much of my faith tradition is formed and located, to walk upon the same hills and paths of the ancestors of many sacred texts -- this has been a lifelong dream. Tonight, while we stood in the cold at Haas Promenade, upon a hill overlooking Jerusalem, my dream became reality. And as we spoke of the rich, multi-layered narratives of the land, we paused to simply gaze out on the Old City.

At the very moment we paused to reflect quietly, a mosque in the distance of East Jerusalem began its call to prayer. I closed my eyes and tears began to swell -- though many might deny it, Muslims, Jews, and Christians do have shared origins, after all. I stood, captured in silent agreement as the man sang the words, "allahu akbar," God is great, indeed!

Peace. Finishing our time together, professor, Dr. Susan Thistlethwaite, challenged us to think about what that word means. Though one might easily define it as, "not fighting," there is, certainly, a multiplicity of meanings and feelings in relation to the word. I think of my learning in Ancient Hebrew (which is a completely different language than modern Hebrew) and, specifically, the word, "shalom." More than just a peace or nonviolence, the word shalom communicates a sense of wholeness, a quality of completeness. Rather than a simple equilibrium of coexistence, might peace, or shalom, be a place to strive for? A place where wholeness and health is what everyone desires, a co-thriving of life and cultures.

Then, I thought about the location where we were standing: Haas Promenade is a place that serves as an invisible line between East and West Jerusalem. As I lay in bed, I consider the ways how the geographical layout of the city affects theology, and vice versa. Consequently, instead of a division of two sides, a binary, I wonder about the potential of seeing it, not as a separation of homeland, but the place where different people come together as one. There is much to converse about and consider in the shared origins of the Abrahamic traditions.

May these shared origins bring us closer to the divine and to each other, as we seek shalom in all things. Amen.