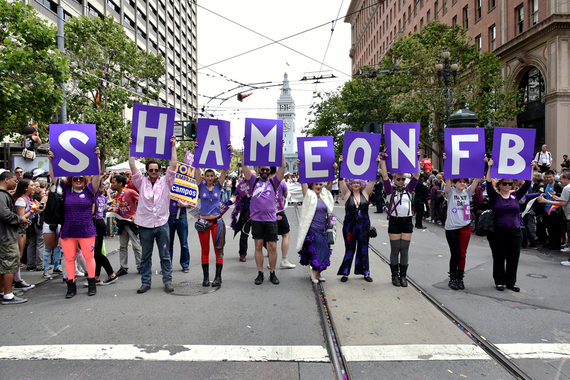 Signs from protest at SF Pride: "Shame on FB." Photo by Gareth Gooch.

In a recent Townhall Q&A, Mark Zuckerberg finally responded to Facebook's ongoing "real names" controversy. Well, sort of. In a response to a question posed by BuzzFeed reporter Alex Kantrowitz, the social media site's CEO acknowledged "some confusion about what our policy actually is." However, rather than clarifying the company's policy, Zuck merely echoed the same corporate double-speak that we've been hearing from the company for months: that Facebook has no plans to abandon this discriminatory policy, but also claims to be "working" to make it better.

A bit of background: Facebook's so-called "real names" policy came under storm last September when hundreds of drag queens—myself included—had our accounts reported as "fake" and removed from the site. We learned that we weren't the first or the only ones—many marginalized people, including LGBTQ people, Native Americans, survivors of domestic and sexual violence, political dissidents, and other sexual, ethnic, or cultural minorities had been blocked or had their profiles changed to their legal names without their consent. In many cases, being outed exposed people to further discrimination or physical harm. So, being good drag queens, we decided to raise a ruckus, and ended up with an apology from the company's Chief Product Office Chris Cox. Unfortunately, his promise to do better turned out to be empty, as Facebook has resisted significant changes to either its policy or enforcement procedures.

In his recent statement—hot on the heels of recent protests at Facebook's headquarters and San Francisco Pride—Zuckerberg tried to dismiss the issue as user confusion, but his own convoluted response is just another example of how unclear and inconsistent Facebook's policy is as a whole. While Facebook likes to talk about the bandaids it has put forward in response to backlash, there's only one true solution: it's time for Facebook to listen to its users and do away with this policy for good. 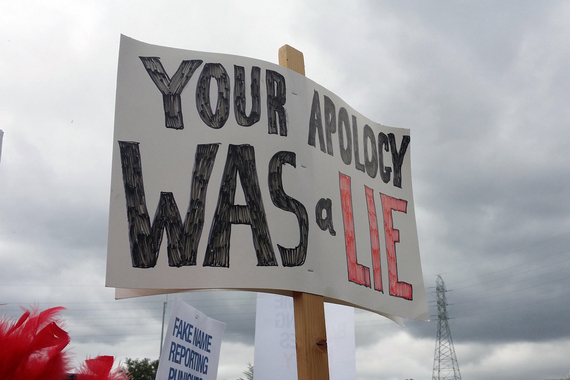 The company's main soundbyte for the past several months is that "real names" keep people safe. Zuckerberg offers the example of a woman leaving an abusive ex-husband, suggesting that because the perpetrator is compelled to use his real name, she "can easily block him." But it's not always that easy, and Facebook's policies and procedure still leave her exposed in a dangerous ways.

Most importantly, Facebook presumes that this hypothetical abuser is playing by the site's rules. Given that he's already committed a crime—and keeping in mind the stakes of domestic and sexual violence—it's probably safest to presume he's not. Even with the current policy, it's incredibly easy to create new profiles under a "normal" sounding name: Facebook's culturally-biased algorithms only flag accounts at sign-up if they're deemed suspicious; otherwise users only have to show ID if they're later reported by another user as "fake." Thus, while queer, trans, and Native American accounts get shut down, it's actually quite easy to create an army of John Smiths or Bob Joneses.

In Zuck's example, the woman who survived abuse would not only have to block her ex's account, but may also need to stay on the lookout for the additional profiles he created to stalk her. (Or for accounts that belong to his buddies, who may allow him to sign in on the sly.) It not only shows that the policy is discriminatory, but also places quite a burden on someone whose safety is already at risk: blocking should be a last resort. Instead, she should have tools to prevent herself from being found in the first place. 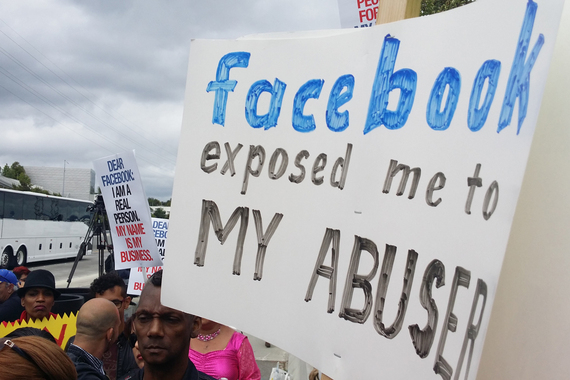 Zuckerberg's other short-sighted claim is that "real names" make things "easy because you can just type [someone's] name into search and find them." While it may make it convenient to find your friends, this very same search bar makes it all-too-easy for a perpetrator or stalker to find his victim. (In some cases, she may even pop up in his "People You May Know" feed!) Facebook has made some improvements to its privacy tools after years of criticism, but a user's name, profile photo, and networks always remain public—and searchable.

In 2014, the National Network to End Domestic Violence (NNEDV) worked with Facebook to publish a guide that assists survivors in locking down their accounts, and while it raises concerns about some implications of this policy, it largely steers clear of the details. But NNEDV's own Survivor Privacy resources generally recommend that survivors "maximize their privacy by using being careful about what they share," including "not using your real name in your email or username."

This isn't merely hypothetical. The #MyNameIs campaign has received testimonies from dozens of survivors, including women who have been outed or found on Facebook, and would prefer to use a pseudonym in order to maintain their privacy and safety while still connecting with friends and loved ones. And it's not just survivors. We've heard from political dissidents, government bureaucrats, teachers, healthcare workers, law enforcement officials, sex workers, judges, and many others who all need a bit of added privacy between different realms of their lives. Just two days ago, the campaign received an email from an Ethiopian LGBTQ activist whose account had been reported: if forced to use his legal name, he could face violence or imprisonment, but if he loses his account, thousands of LGBTQ Ethiopians will lose access to a valuable space to share resources and build community. Rather than responding to these concerns with policy or procedural change, Facebook continues to dig in its heels and tell vulnerable users that it knows what's best for us. 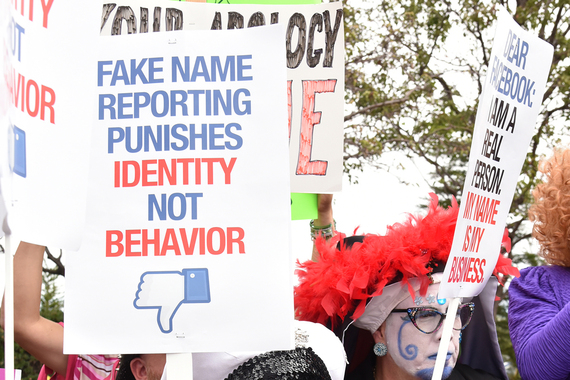 For transgender users—as well as people of color, artists, and others whose identities fall outside of the Facebook's predominantly straight, white, male employee demographics—the "confusion" Zuckerberg speaks of largely centers around the burden of proving that your identity is authentic. Ironically, Facebook claims that this policy is meant to promote accountability, and yet, their enforcement process itself lacks transparency. Instead, Facebook sets the policy, decides if you're "authentic," and denies any process of appeal. Moreover, by allowing users to report each other for "fake names"—while better options exist to report harassment or actual identity fraud—Facebook's policy gives cyberbullies an extra tool to harass vulnerable users simply for being themselves.

Zuckerberg responded in the Q&A that part of the confusion is that "[your] real name does not mean your legal name." And indeed, one of the changes Facebook likes to brag about making is that users now have options of submitting forms of ID that aren't issued by a government. But the list of alternatives Facebook provides is itself confounding, asking that users submit two documents, one of which must include a photo or date of birth. However, the vast majority of options—including bus passes, library cards, magazine subscriptions, and utility bills—almost never have these types of information. Moreover, most people who have a common nickname are still likely to use their legal name on these forms of ID for reasons of bureaucracy or convenience, and because these documents have little social bearing: very few people greet someone by the name on their bus pass!

Of course, for transgender people—especially youth, people of color, and low-income people—obtaining any of these documents in one's authentic name can be expensive and legally difficult. Even a former Facebook employee who helped expand Facebook's gender options had her account reported and suspended just before this year's Pride celebrations, despite using the same name she had used on her employee badge months before.

That's why the #MyNameIs campaign has suggested that Facebook develop an alternate system—like an expansion of its Trusted Contacts program or photo verification similar to Reddit's "Ask Me Anything" series—that promotes accountability (and screens out spam and bots) without relying on a piece of paper. 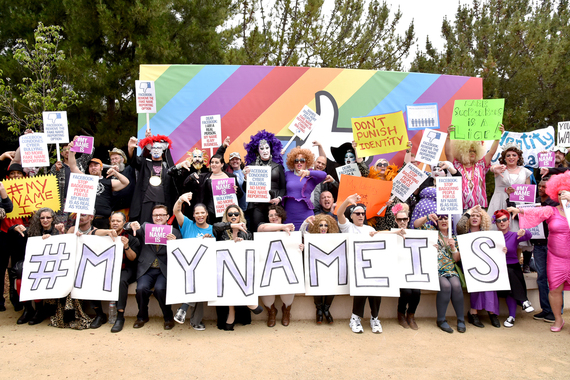 Finally, it's worth noting that Facebook has not yet provided any data to back up its arguments, including Zuckerberg's claim that "people are much less likely to try to act abusively towards other members of our community when they're using their real names." And we know that if there's one thing Facebook has, it's data. Instead, sources have suggested that allowing pseudonyms—neither legal names nor anonymous logins—can actually increase both the quantity and quality of engagement online.

As one of the world's predominant communications platforms with nearly 1.5 billion users, Facebook has a responsibility to ensure that it's not silencing well-intentioned users, especially those whose voices are already silenced too often in society. And as its users, we have a responsibility to demand change.

If Facebook truly wants people to use their real names—and apply this policy equitably and effectively—it would not only demand ID at signup, but would ask all of its existing users to fork over their ID retroactively. Activists certainly don't want that, and Facebook probably doesn't either: it would be a huge logistical nightmare, open the company up to countless legal liabilities, and likely result in its large user base shrinking very fast.

As it is, Facebook's policy disproportionately affects certain categories of users, and whether intentional or not, that's discriminatory as well as dangerous for many. So, Zuck, let's cut through the confusion and make things perfectly clear: it's time for Facebook to be accountable to its community and delete this policy once and for all.