Wake up, America! Yesterday's mass shooting at Sandy Hook Elementary School in Newtown, Conn., was the deadliest elementary school shooting in American history. Every single mother, every single father, every teacher, every brother and sister, every single person who cares about our children and their safety must take a stand and demand action from our senators and congressmen on stronger gun legislation now. It is beyond tragic that the people we vote into office will not do it. Our state senators and congressmen sitting on Capitol Hill, shame on you for your failure in leadership, shame on you for the countless deaths of innocent victims.

From shootings and mass killings in movie theaters, temples, malls and now kindergarten classes, why aren't more Americans angry? Why aren't more Americans putting pressure on our government officials to reform the system. Why aren't mothers and fathers fighting the battle for their children? Piers Morgan's moving words on yesterday's CNN broadcast were, "Stop worrying about the gun lobby. It's time for some moral conviction and moral courage." 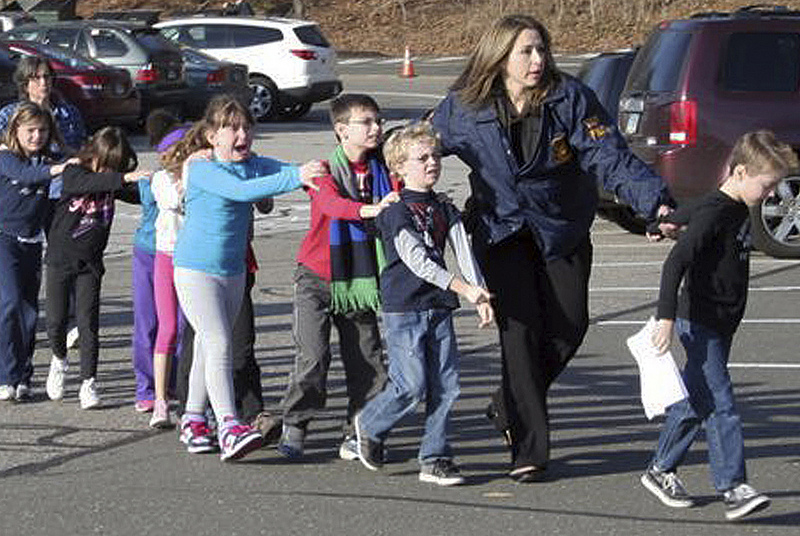 Countless innocent lives are lost every year because right-wing gun zealots believe that Americans have an unlimited right to bear arms. The bullies and propagandists at the NRA have taken the subject of gun control off the table, even military assault weapons, which serve no conceivable purpose except racking up huge body counts. Earlier this year Madonna Gauding wrote,

While the NRA represents itself as an association of gun enthusiasts, its real purpose is to serve the interests of gun manufacturers. To that end, it bullies elected officials into passing laws that will make it easier for the gun industry sell more rifles and handguns.

President Obama must take a stand now. Surely New York Mayor Mike Bloomberg, sportscaster Bob Costas, and and filmmaker Michael Moore aren't the only ones with the courage to stand up to the gun lobbies.

Any time something scary happens in an airport, stronger TSA rules are quickly written into the books. We have to take off our jackets, our belts, our shoes, watches, and bracelets, take out our laptops and be sure not to bring a bottle of water on board. Our liquids are minimized to 3 oz. bottles in one tiny Ziploc bag. At the same time, pretty much any mentally ill person off the streets is allowed to don bulletproof armor and take an assault weapon wherever they please, thanks to an overly literal reading of an antiquated constitutional right.

Twenty-seven dead, 20 of them children, 10 days before Christmas. Two dead in an Oregon mall earlier this week. How many times does this have to happen before we realize that an unrestricted right to bear arms is ludicrous? Those on the right will argue that it's not guns that kill, it's people who kill. Banning guns won't stop violence -- but if violent people don't have access to guns, they will kill a lot less people.

After NFL star Jovan Belcher killed his girlfriend and then himself with his handgun two weeks ago, the sportscaster Bob Costas was widely criticized for suggesting that having a loaded gun near to hand raises the likelihood that a domestic disturbance might turn deadly. The aging rocker Ted Nugent ripped him via Twitter:

"We thought Bob Costas was smarter than that. Only fools blame tools instead of human failings. Shame Bob," and "Blaming guns for crime is like blaming helmuts (sic) for headbutts. ... Uve lost it."

Nugent has lost the plot. We've heard this weak argument over and over. But eliminating how people get weapons is the easy thing to do. How are they killing? With guns. It's a fairly simple thing to quickly put greater restrictions and sanctions into place or just ban these weapons altogether. The why is a bigger problem, and one we need to grapple with. Perhaps it's our fractured society or lack of social cohesion, perhaps it's our parenting styles, our violent media, video games, bullying, peer pressure or untreated mental illness. These are not to be ignored and need to be addressed. But that doesn't mean we should put the issue of gun control aside. Too many are dying.

While President Obama said "our hearts are broken today" and called for "meaningful action," he did not spefically cite stronger legislative action on gun laws.

As Katie J.M. Baker at Jezebel put it, "Fuck you, guns." It's strong language, but appropriate. White House Press Secretary Jay Carney should be ashamed of himself for saying that "today is not that day" to discuss gun control. If there was ever a time to speak up, it is now."

As citizens, we must all take a stand. March, protest, Facebook, Tweet, write your congressman, senators and legislators urging them to ban guns. Send the President this petition and speak up for the 20 innocent children who no longer have a voice.