When Amy Ferris asked me to contribute an essay to Dancing at the Shame Prom: Sharing the Stories That Kept Us Small, I wasn't sure that I had any shame. Then, when I thought about it, I realized that I did. I just hadn't framed it that way. I agreed to participate. After I handed in my essay, I heard back from co-editor Hollye Dexter. "I think you are holding back," she said. "Can you go a little deeper?" So I did. Along with twenty-six other women, I wrote openly about issues that had impacted my life.

Now that the book is out, I have taken off my memoirist hat and am writing as health journalist. Reading the stories that encompassed familial alcoholism, sexual abuse, parental suicide, distorted body images, hoarding, alienation and racial identity anxiety made me want to get to the psychological root of how shame shapes who we are and how we live out lives.

I interviewed four practitioners who shared insights that were both clinical and revelatory. We focused on how shame specifically impacts girls and women. Many of their observations overlapped. To a person, they all began the conversation by drawing a distinction between shame and guilt. Shame is a feeling or belief that screams, "I am bad." Guilt is feeling, "I did something bad." Shame is feeling worthless. Guilt is external; you can fix it. To have shame is to think, "I am damaged."

Amber Lewter EdS., LAPC, whose background includes working as a survivor advocate at a rape crisis center, told me, "When women define themselves as being bad, it creates low self-esteem and a poor sense of self-worth." Treating those who have experienced childhood sexual trauma, Lewter sees women coming in for counseling with a lot of "shoulds" ("I should have told someone."). She conducts an exploration of shame through expanding awareness of external factors, pointing out that what happened "was beyond the control" of the patient. She believes that shame is more of an issue for women because they are "relationship-centric" and therefore bring childhood shame and a "less than" mindset into their adult relationships.

Ph.D. and Licensed Clinical Psychologist Nerina Garcia-Arcement qualifies shame as "an insidious emotion, often at the root of mental health problems like depression and anxiety." She sees shame as creating "a sense of isolation" which poisons an individual's self-esteem." She told me, "My patients feel silenced due to their shame. Often, they can't even speak out loud what they feel ashamed about." Garcia-Arcement defines shame as a reflection of a "core value." Therefore, what results is a need to cover up what we feel ashamed about. She related, "The power of shame is that it silences us and creates internal negative dialogue, such as, 'I wasn't good enough. I deserved it.' So we want to stay invisible. We don't want to feel vulnerable. This stunts our ability to grow." Garcia-Arcement explained how the fallout of shame translates into a "fear of takings risks."

"A silent killer," is how Lori Freson, Licensed Marriage and Family Therapist, describes shame. Her practice specializes in women's issues and self-esteem. "Women don't always acknowledge shame as a presenting problem," she said. "Women can have body image problems and not realize it is shame." She spelled out, "Shame about our bodies can lead to isolation, depression and eating disorders." Shame about sexual abuse can lead to "avoidance of intimacy, relationships, sexual problems and self-harm." Shame about an addiction "can delay or sabotage" efforts to recover. Finally, she added the key observation, "Shame is connected to self-perception and how you think people perceive you."

Founder of the Critical Therapy Center, Silvia M. Dutchevici, spoke at length about how our culture "plays into our perceptions." Her philosophy embraces a holistic approach. "Psychology is not in a vacuum," she emphasized. She referenced the issue of race, class, gender, ideology and economic status. Her point of view is that "society has issues as well," forcing people to "adapt to a false criteria rather than challenging that criteria." Dutchevici was crystal clear in her assessment: "For women in particular, depending on the trauma, feelings of shame may arise from our culture's imposition of gender roles and the way women have been socially conditioned regarding their view of themselves. The more a society demands perfectionism," Dutchevici continued, "the more we have shame." Both Freson and Garcia-Arcement addressed this element as well.

"A lot of shame comes from external societal factors," Freson said. "People want to be accepted. People are afraid of being different. Shame among women and girls is more prevalent because of cultural standards." Freson pointed to celebrity media and fashion magazines. "People shut shame down because they want to have the perfect image." Her message about shame to young girls is, "You don't have to be perfect. Be your best self."

"The core expectation for women," said Garcia-Arcement, "is that we can do it all. Be beautiful and be everything to everybody." When girls and women buy into cultural norms they "learn to hate their bodies and themselves." It all comes back to not being "good enough." Garcia-Arcement illustrated shame from the ground level of family dynamics, up and outward toward group identification. "Our family is a reflection of who we are," she said. "So if there is a family behavior [alcoholism, suicide, sexual abuse, domestic violence], it's still a part of us." Treatment by Garcia-Arcement entails the challenges faced by people of color. She identified that if a person from a minority community does something that the rest of the group is not proud of--it is seen as a "personal reflection on who they are."

In tandem, Dutchevici -- a political refugee from Romania -- touched on the use of shame as a tool of control in promoting a specific ideology. Shame also operates by keeping group memberships and affiliations intact.

So what can be done? All four women I spoke with communicated the need to explore an individual's experience through expanding consciousness. Lewter articulated about introducing an awareness of "external factors." Freson, who maintains that if "shame is not exposed and dealt with it can destroy your relationships and your life," believes the more exposure the topic gets the more taboos are broken down. Applauding the premise of the book, Freson sees it functioning as a tool for dialogue while enabling readers to discover, "Oh. It's not just me. I'm not the only one."

Dutchevici agreed. "The more people come out and talk about shame, the less power it has." She reiterated that it was important to "name the emotion."

"The first step is to realize that you are not alone," Garcia-Arcement reiterated. She uses a combination of talk therapy, cognitive behavior therapy and insight-oriented work. She suggested mindfulness exercises, trying to connect the mind and body, sitting with your feelings and being in the moment. Garcia-Arcement stressed the power of stories, advising the importance of sharing one's story. "Empathy is essential to healing. If you can't say it out loud yet, write it down. Excise it from yourself. Writing is a useful tool, as there is no witness to the shame." An important element of eventually sharing the narrative is that is helps individuals "normalize their experience," through a realization that they are not alone and not to blame. (The Shame Prom has a Tumblr blog where anyone can post a shame narrative, either with her name or anonymously). Garcia-Arcement said definitively, "Everyone has shame. We just don't want to look at it."

In her essay, Elizabeth Geitz wrote,

"I've learned letting go of shame is one of the most freeing things I've ever done. I've learned that I don't have to dance at the Shame Prom forever. The dress, the shoes, the long-wilted corsage are now gone.

The music has finally stopped." 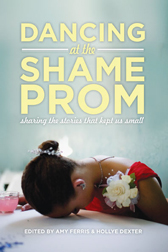 This article originally appeared on the women's healthsite EmpowHER.