Most of us, when presented with a computer, 3D printer, smartphone or automobile, wouldn't gasp in awe or fear as if encountering some manifestation of supernatural powers. And yet, how much do we really understand the contemporary technologies that govern our daily existence? For most of us non-scientists navigating the contemporary world, we place a superstitious faith in technology without prying to understand its deeper complexities, accepting it as a sort of modern day magic.

Shamus Clisset toys with this space where science meets magic in his large-scale, 3D rendered images, transforming everyday objects into hyperreal visual explosions. His exhibition "Space God / Magic Guy" takes inspiration from science fiction writer Arthur C. Clarke, who posits that magic is science we don’t yet understand. And thus, as Kerry Doran explains in a statement for the gallery, "what is imaginable but also inconceivable is most magical of all." Clisset explores this domain of familiar but not understood objects floating in an alternate, virtual reality. With help from an alter-ego he refers to as Fake Shamus, Clisset creates totems to technology, examining their utilitarian abilities as well as their supernatural ones.

Basketballs, soda cans, kitchen knives and cleaning detergent float in the artist's own digital arena. Through virtual landscapes, Clisset activates the magical properties of the things that surround our daily lives, exposing the magic that trickles through our computers, kitchens and closets. We reached out to Clisset to learn more. 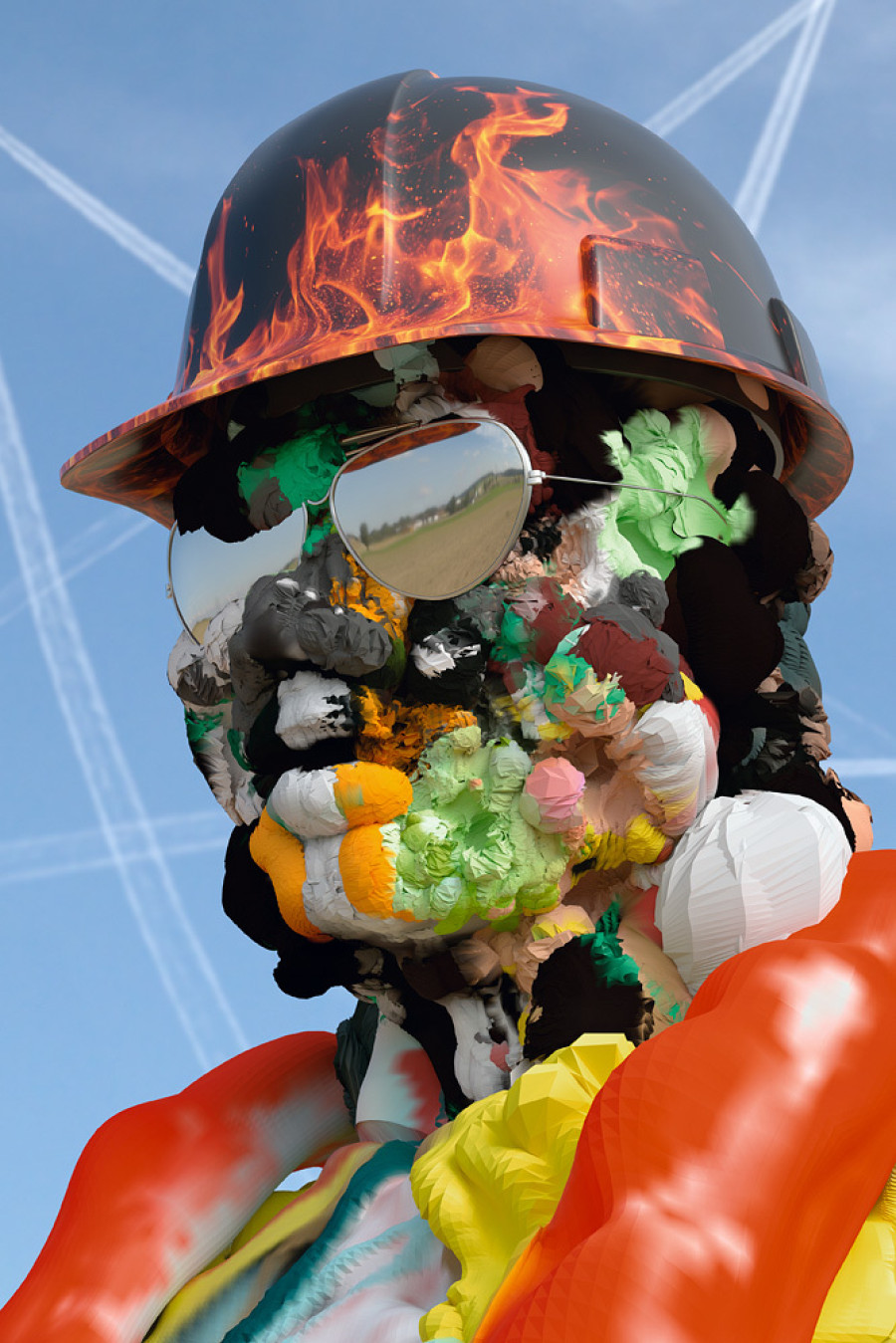 Who is Fake Shamus? When/why did he become your alter-ego?

He's not so much an alter-ego as much as a sort of digital golem that allows me to project a ton of different ideas onto him. I started using that name for all of my digital interaction about 10 years ago, after reading about a study that was done with kids, asking them to describe their imaginary friends. There was a young girl in the study who called her friend "Fake Rachel" and I thought that was brilliant because the kid had a seriously detailed, realistic perception of this person, while totally acknowledging that the whole thing was made up, fake.

At the time I just took on the name as a way of separating myself from my online persona. But when I began working exclusively with 3D characters and environments for my work, it was a clear instinct to build an actual, digital "FakeShamus" character. Given the capabilities of 3D software to create hyper-detailed, realistic imagery (which is also completely not real) it seemed like a perfect analogy. Over time my work has evolved and fractured into so many tangents that he's not really recognizable as the first incarnation I gave him, but in some ways every image I make is based on some iteration of him.

How would you define the difference between art and science?

Seems like kind of a huge question for me to really do it justice, but I think one way I would see it is that science is logical explanation while art is superstition. Artists make their own kind of logic, not necessarily based on finding correct solutions, but interesting possibilities. I think a lot of my favorite artists are working on explaining phenomena that they themselves created.

Your work transforms everyday objects into hyperreal, unrecognizable landscapes? What inspires you about the particular 'banal' objects you fold into your work? How do you choose?

Everyday objects in my work are only banal in a darker sense of the word. The banality of current times is like a smooth, bland cover over crazy amounts of violence in the past and continuing now. I think there's a real absurd conflict reflected in that and we all participate in it, so my choice of objects is menacing, but also funny. Many of the specific objects I create are also based on things from my own daily life or past fixations, like a particular pair of sunglasses, or a sports car I was obsessed with growing up. Recreating those things as digital models and incorporating them into the more abstract imagery gives me an understanding and control over them in ways that aren't possible in real life and it's strangely satisfying. 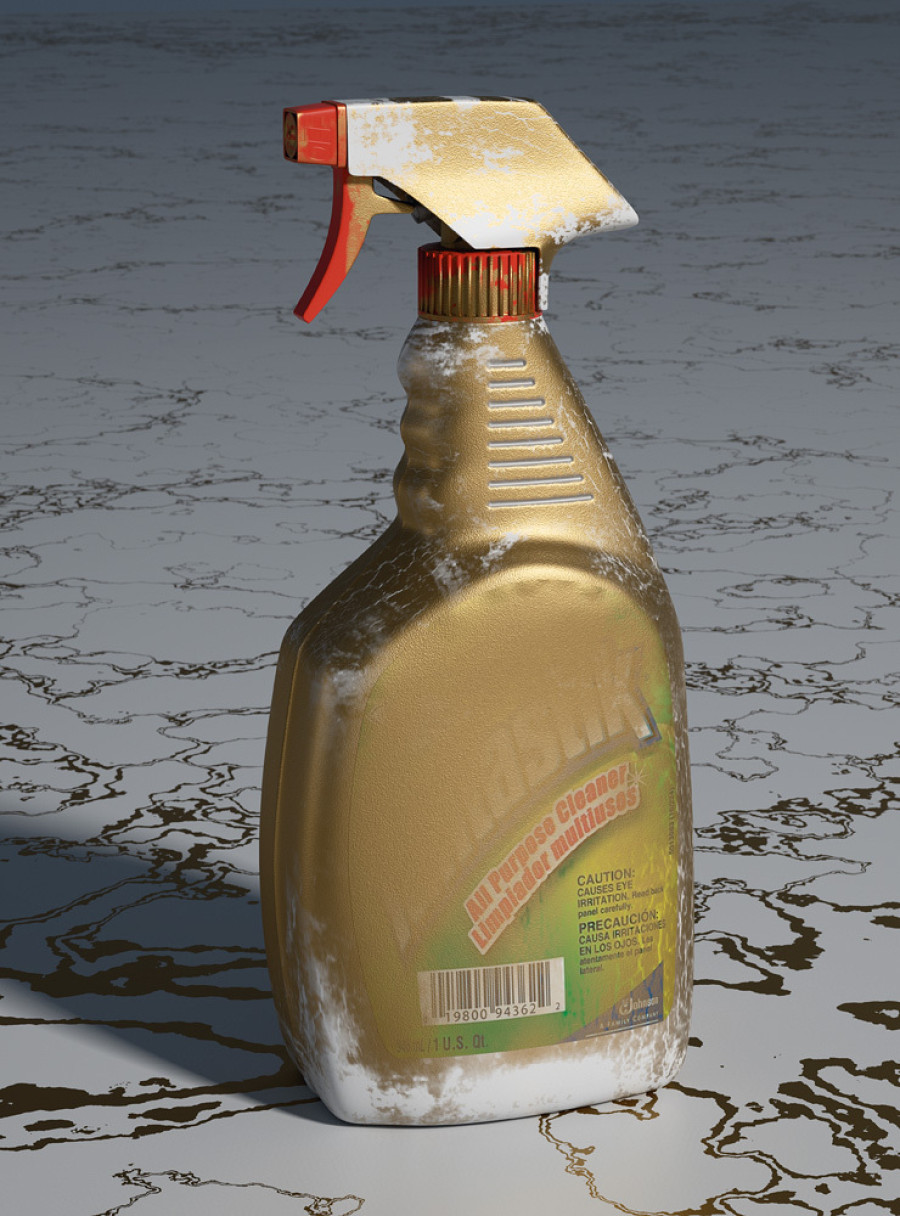 Your process contains aspects of photography, sculpture, painting, digital art... How would you describe your artistic medium or role as an image maker?

People often want to approach my work through those reference points of more traditional media, but I really think it needs to be seen on its own terms now. It's been around long enough so that more people are familiar with the basic concepts of 3D models and rendering. So, really, it's none of the above. It's making objects and images purely from data. Metaphysically, it's like creating things directly from the void. It's interfacing with machines that can output visuals from my head directly into print. But in the simplest sense, when I'm working it's just sitting at a desk, moving a cursor around on a screen, making the computer do things (basically what a lot of people are doing nowadays, all day, every day...).

The exhibition deals with the relationship between magic and science. Where do you see art fitting in?

I'd say the show deals with magic, the supernatural and science fiction more than any actual science. But we are at an interesting point related to this, where the technology at our fingertips far surpasses most people's abilities to fully understand its capabilities. We know the basics of what it is intended to do, and how it helps our lives, but few grasp the specifics of how it actually works. That creates an almost religious (at least superstitious) relationship to technology for most people.

The ones who design, understand and control the hardware and software become the mystical creators of this tech reality. And artists, while historically not the builders of new technology itself, are among the first to interpret its meaning and implications and to put it to use in new, strange ways. This makes them magicians and gurus of the technological world; often just doing tricks, but some with real vision for shaping the future.

"Space God / Magic Guy" runs until October 11, 2014 at Postmasters Gallery in New York. See a preview of the works below.

Artist Reveals Technology As A Contemporary Form Of Magic, And Artists Are The Magicians
Architecture Of The Future