"I often say I was drafted by injustice," explains Shane Claiborne, one of the founders of The Simple Way, a Christian community located in North Philadelphia. Tall, thin, with dreadlocks and a ready smile, Shane shares with me the religious experience that changed his life.

In the late 1990s, a group of homeless families squatting in an abandoned cathedral in Philadelphia were threatened with eviction when the local diocese decided to sell the property. The homeless community hung a banner outside the cathedral that asked: "How can you worship a homeless man on Sunday and evict him on Monday?"

The standoff captured the imagination of Shane and several other evangelical students who were then studying at Eastern University outside of the city. Outraged, the students rallied in solidarity with the homeless cathedral dwellers. Angered by the poverty and violence, Shane recalls: "I threw my hands up at God and said, 'why do you allow this?' And then I felt God ask me the same question."

Galvanized by the experience, the mostly middle class and white students made the decision to leave the comfortable culture of mega-churches and malls that had dominated their former lives, and dedicate themselves to 'living simply so that others might simply live.'

Settling in the same neighborhood as the abandoned cathedral, The Simple Way found inspiration for their fledgling community from St. Francis of Assisi, the Catholic saint who left a life of privilege and position to start a monastic community based on voluntary poverty, spiritual discipline and service to the poor. They also became aware of more recent models including Dorothy Day's Catholic Worker House started in New York City in the 1930's, and Koinonia Farm, an inter-racial Christian community founded in the 1940's in Americus, Georgia.

The Simple Way identifies with this monastic tradition. "Monastics such as Francis of Assisi heard the whisper of God say, 'repair my Church which is in ruins'. That is the whisper many of us hear today,'" Shane explains, "There is a history of Christians who have "left the world" to save the world -- they often go to the margins and to the abandoned places like the desert. The inner city is our contemporary desert."

Since its formation in 1997, The Simple Way has had dozens of men and women take part in the community. While Shane and his wife Katie expect to stay part of The Simple Way in North Philadelphia their whole lives; other former members have spread out across the country forming similar communities, and building a small but growing Christian movement known as the New Monasticism.

"Nobody wants their kid to get interested in new monasticism," joked Ben, a young seminarian from Michigan when he arrived at The Simple Way for a visit, "They wand them to become businessmen."

Parental concern or no, the radical faith and lifestyle of the new monastics has attracted a surprising amount of interest from Christians of all ages and traditions. "I'm on a spiritual journey," Ben explained, "For the past couple of years, I have been asking what it really means to be a person of radical Christian faith."

Ben's religious sojourn took him from a non-denominational mega-church, to seminary and a job as a youth pastor at an Episcopalian congregation where Ben and his friends have begun to form a small community, coming together for daily prayer.

Recently Ben and Kyle, a fellow seminarian, went to live for a few weeks in a traditional Anglo-Catholic monastery; and in November they joined fifteen others for a weekend visit to The Simple Way organized by the School for Conversion.

Formed six years ago to facilitate the growing interest in the new monastic movement, the School for Conversion is coordinated by Jonathan Wilson-Hartgrove, a former Simple Way community member who went on to form a new community in Durham, NC. When asked about the mission of the School for Conversion, Wilson-Hartgrove explains: "we are hoping to show that a relationship with Jesus requires a way of life that is an interruption to the way people are living now."

The first thing the students learn is that monasticism does not mean living a cloistered life. Being a part of, and in service to, the surrounding community is at the core of the new monastic movement. At The Simple Way, the outreach includes after school tutoring, a gardening project, a flag football league, and a food bank. At Christmas they distribute over 600 Christmas toys to neighborhood parents to give to their children.

Members of The Simple Way also lead campaigns against home evictions, hold rallies for the rights of the homeless and a Good Friday vigil at a gun stores whose wares have been traced back to shootings in their community. Members of The Simple Way even went to Iraq as part of a Christian Peacemaking Teams to provide a prayerful witness in Bagdad when the US invasion began in 2003.

While outreach is crucial, it goes hand in hand with spiritual discipline. In addition to their ministries, all members of The Simple Way participate in the religious life of the community. There is daily morning prayer, evening prayer once a week, and a weekly community Bible study. As a current member of The Simple Way explained to me with a mix of admiration and exasperation: "We pray for like 45 minutes at the beginning of every meeting. And then fifteen minutes at the end - that is a lot of prayer for a two and a half hour meeting! But that is why I am here."

The members of The Simple Way are not the only monastics living in Philly. Twenty years ago, Sister Margaret along with another Catholic nun and a monk moved into several abandoned properties to start a hermitage. Now, she is the spiritual mother of a drug and alcohol recovery community known as The New Jerusalem.

Sister Margaret also serves as 'faculty' for the School of Conversion. On a cold November evening, the largely white and middle class members of the School of Conversion mix with mostly African American recovery community of The New Jerusalem. After poetry reading and hymn singing, Sister Margaret opens up her Bible. Equally sharing as they delve into the Prophet Isaiah and the Gospel of Matthew, the two disparate communities became one for a time as the themes of being born again, and non-violence are taught through Biblical study and by example.

The School of Conversion teaches potential new monastics about the need to be in community with the poor, but also offers a lesson on how their neighbors became poor. In both Philadelphia and Camden, the city is the best teacher and the students load into cars and vans to participate in a two-hour 'city reality tour.'

Shane acts as the tour guide as he stands on broken glass, amidst trash and weeds while pointing out the shuttered hospital and the long lines at the soup kitchens. He explains the reality of his neighborhood in raw terms to the clearly shocked students: "Philadelphia lost over 150,000 jobs in the last few decades; we have over 700 closed factories, 1,5000 vacant lots and over 20,000 abandoned houses."

Claiborne hammers home what is clearly a sore point for him -- that the poverty and unemployment of the people in his adopted neighborhood is not because they don't want to work. "In fact," he counters, "the people living in these neighborhoods are some of the hardest working people you will ever meet."

The reality tour especially affected Lyn, who drove all the way from Arkansas to Philadelphia with her friend Gail, a pastor, to attend the School for Conversion. Lyn saw a disturbing parallel to her own town that is completely reliant on two factories and wondered what would happen if they ever decided to leave.

"What strikes me is that this is also a part of the American dream. We always say 'only in America,' but look what they've done. The companies left, took the jobs and what remains is polluted soil and a polluted river," Lyn reflected. "We need to get back to the basics of community and a more self sustaining mode of existing--being dependent on one another instead of money."

Strikingly absent from the School for Conversion is talk of electoral politics. While media portrays all evangelicals as aligned with the Republican Party, the monastics are equally suspicious of both Democrats and Republicans. So much so that in 2008, Shane and Chris Haw, a member of the sister monastic community, The Camden House, wrote a book called Jesus For President: Politics for Ordinary Radicals, showing where their true allegiance lies.

As Wilson-Hartgrove explained, "If politics is about how people live together then the Gospel is political, but it can't ever be reduced to a political effort." Instead, the message that participants in the School for Conversion hear is about the Kingdom of God and the Spirit of Jesus creating a new kind of community based on mutual responsibility, inter-dependence and common purpose.

This new kind of Christian community is what Ben and others seem to be hungry for: "We have such fragmentary lives and beliefs in this post modern world, that is why I am attracted to this way of life -- a common meal, a common prayer, a common life -- hey we are one body right? The body of Christ."

When asked what he hopes people will understand about The Simple Way and the new monastics, Shane Claiborne's offers his own testimony: "We hope that folks will walk away with a fresh vision that sees the Gospel as more than a way of believing, but a way of living. The resurrection happened 2000 years ago -- but it also happens tomorrow."

For Times Such As These: The Radical Christian Witness Of The New Monastics (PHOTOS)
Simple Way 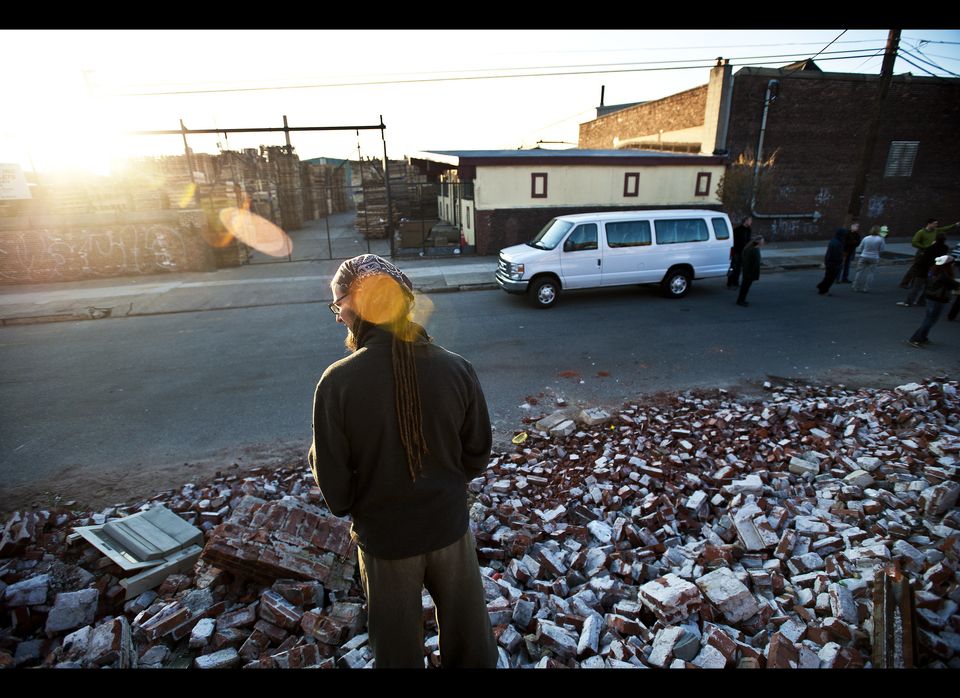 1 / 22
The Simple Way
Shane Claiborne stands among the rubble of Camden. The School of Conversion visitors take part in a 'Reality Tour' of Camden, New Jersey, which has been hit by economic depression and suffers from widespread poverty and violence. Saturday Nov.12, 2011. (Damon Dahlen, AOL)
Damon Dahlen, AOL