Many Internet users in China are speaking out after Shanghai Metro's (Subway) official Sina Weibo micro-blog posted a photo of a scantily clad woman accompanied by the comment, "Dressing like that, it would be unusual for a lady not be harassed. There can be perverts on the subway and it's hard to get rid of them. Please have self respect, ladies."

The post has nearly 7000 comments as of this writing and at one point was the second most discussed topic on Sina Weibo. 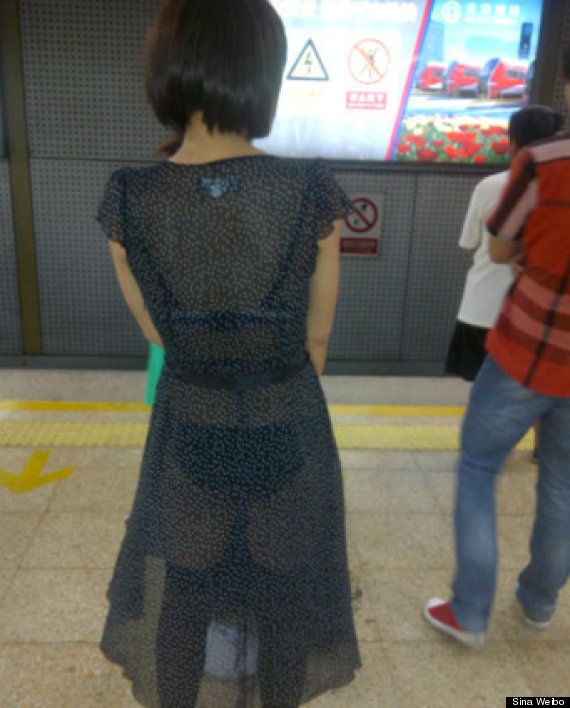 Thousands of female passengers are now voicing their displeasure against the Shanghai Metro; some even staged a protest on June 24 by covering their faces, wearing "breast bowl protective bras" and holding signs saying, "Yes to coolness, no to perversion."

In a BBC report one woman said, "The abuse will happen whatever we wear." Another stated that, "It's summer, girls have to dress lightly."

The website Ministry of Tofu points out that in the last two months there have been multiple Shanghai metro riders who have been victims or witnessed sexual harassment:

Despite recent cases of abuse, some commenters still claim that women are "inviting" the harassment upon themselves by dressing "scantily." In a Sina Weibo survey of 44,580 respondents, approximately 70% chose the answer "Women should be dressed in a self-protective manner" when asked what they think of the Shanghai Metro's call for modest clothing.

The website Tea Leaf Nation translated some comments from users reacting to the woman's June 24th protest, and they were equally unsupportive, with Sina Weibo user @快乐小陶子 commenting, “I think a woman who wears revealing clothes in public is actually sexually harassing the men there. Regardless of your gender, you should not use the hot weather as an excuse to dress indecently. Public places aren’t your locker room; regardless of your gender, if you want to be respected by others, you have to learn to respect other people first.”

This does not bode well for a Taiwanese style no-pants subway ride in Shanghai anytime soon.