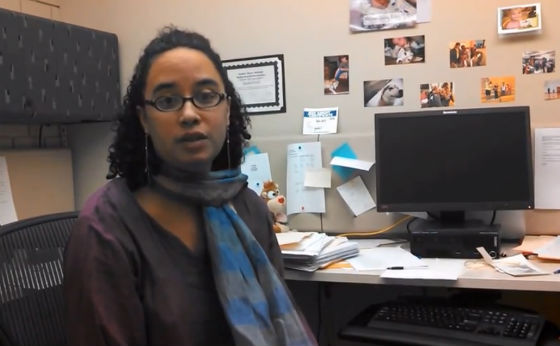 Hi guys. Before you ask, I'm white too. Someone wise said social activism tastes better when the waiter is white, and while this is unfortunate, you clearly aren't listening to your professor, Shannon Gibney, so I thought I'd take a moment to clear some things up, mano-a-mano. You know, Caucasian-a-Caucasian.

Let me make something clear right up front: you have no real idea what it's like to be discriminated against on the basis of race. Neither do I. You know why? Because we're white. We're white people in America, and that means almost every aspect of the country we live in is geared toward us: 99 percent of books, television, film, magazines, and even porn, is made for us and represents us. Maybe you read (though for some reason I deeply doubt it) my article on the absurdity of #WhiteGirlsRock. It's absurd because white people don't need an extra reminder of their value... because it's reaffirmed for them (for us) every single day by the people we see in the media, by the people that run this country, and yes, even by the people that act as our educators. American education has long been under fire by people who use their brains over the continued teaching that Christopher Columbus was a great dude and a hero and someone we should all celebrate year after year. But you probably still think that, don't you?

Probably before you got to college, most of your teachers taught the version of American history that high schools are wont to teach: Columbus was like Mr. Rogers with a (crappy) map, the Pilgrims sang Kumbaya with the Native Americans, and slavery just wasn't that bad. I imagine college courses might have been a bit of a shock for you, with discussions that maybe didn't valorize violent colonization and actually shone a light on the perspective of people who weren't white.

Is this where things started to get uncomfortable for you? I imagine the first lecture on America's legacy of brutality and oppression left you in shock. Maybe you thought that particular professor was just a wayward nut job. But then another class discussed institutional racism, and another. And you began to squirm in your seat because whoa this wasn't just one time where your whiteness -- the thing that you might have squeaked by on for the entirety of your short life; the thing you've unconsciously relied upon to get you out of trouble with the campus police, out of detention and on the honor roll in high school; the thing that might have gotten you your consecutive summer jobs -- that thing, that whiteness, is being criticized, not just once by one random professor who your privilege enables you to ignore, but more than once. You see petitions and articles on the Internet talking about racism and bias and...gasp...white privilege. And you're sick of it, right? Because who wants to sit in a room full of people, people who don't all look and sound like you, and talk about the ways that you are flawed? That's uncomfortable. That's awkward. That doesn't feel good. It feels like being singled out; it feels like being held accountable for things you don't feel responsible for; it feels like being defined by the color of your skin; it feels like being blamed; it feels like being...discriminated against.

But it's not discrimination, boys. And here's why.

Because this is one classroom in your entire life. One speck of discomfort in an ocean that is your life of privilege. Because white supremacy dictates that your skin -- and let's not forget your maleness -- will make things fundamentally easier for you than for a person (and especially a woman) of color. That feeling of being on the spot? Of being defined by the color of your skin? Of being blamed for things that other people of your color do, even if you have not done them yourself? That's not a classroom for people of color. That's life. There's no walking out of class. There's no transferring to a different professor. There is only more of the same, with the hope that dialogue, education, and activism will pull the collective ostrich head from the ground, bit by bit, until that structural racism that you don't like talking about is eradicated.

Look, guys. I see why you're uncomfortable. You have been taught your entire life that white is always right. Your formal education has revolved around the valorization of colonization, the championing of racist brutes, and the marginalization of people of color. You have grown up insulated from racism and discrimination and what those words truly mean. You have been trained to see your whiteness as the norm, the default, the center of the world: you think that Other people have a race, but you are just... you. Your whiteness has been an invisible tool that you have wielded your entire life, mostly without really realizing it, but now that people are criticizing the invisible tool, you are pissed, defensive, and maybe even afraid. I would say that's normal. Everything you've been taught is being contradicted, so a little discomfort is expected.

That's what you said, right? That the discussion of structural racism made you uncomfortable? That you felt the classroom was hostile? That you didn't like that "we have to talk about this all the time"? I have a simple question for you: how do you think people of color feel? What if that classroom that you felt was hostile was your world, your life? You have now filed a formal discrimination complaint with your college against your professor, which I'm sure in your mind is some kind of activism, but by filing that complaint, you are attempting to silence a voice speaking out against discrimination. It's odd, you see. It's odd that you want your voice to be heard and your pain acknowledged, but you don't want to acknowledge the suffering of people of color. You want to talk about discrimination against yourself -- but you don't want to talk about discrimination against people of color. Interesting. Maybe if you'd actually paid attention in that lecture on structural racism, you'd have learned that discrimination in the context of 21st century America has political, social, and economic ramifications. Your hurt feelings, your 90 minutes of discomfort, are just not included in that, fellas.

Bottom line: I want you to be uncomfortable. It means you're being challenged. And that's what college is for, isn't it? I'm not a teacher, but I know that mental growth, like physical growth, comes with growing pains. It's not always easy. It's not always fun. It's going to hurt and you're going to come out the other side bumped and bruised... but better. Shannon Gibney is trying to make the world better. She's trying to make you better. What have you done lately?

Olivia Cole is a poet, author and activist who writes regularly at oliviaacole.wordpress.com.