It may look like a cloud at first, especially when you see it as individual screen shots (shown above). But when you look at the following video shot by Philadelphia resident Hector Garcia over the July 4th weekend, you might think twice about this being a simple mass of floating water particles or vapor.

As Garcia focused on the object, he described seeing "sparkling lights in it."

The cloud-like object was seen moving slowly through the sky and tumbling in such a way to reveal a transparency effect and twinkling lights within it. That's some talented cloud.

Garcia told WTXF FOX 29 News that he went outside on July 5, looked up and noticed the odd object, so he caught it on his cell phone.

"As soon as I started recording, it starts to move and come down," Garcia said. "As I zoomed in on it, it starts to swerve and starts going to the side, and I'm still looking at it and I don't know what it is. I was shocked."

The TV news team said they'd heard a variety of explanations, including a big bag, weird cloud, and soap suds.

One question comes to mind: Why didn't Garcia immediately take his camera and try to find the location where this object hit the ground after it disappeared behind some nearby buildings? (see below composite image).

Also, how was he able to get such a smooth, non-shaky track on this object, unless his camera was already set-up on a tripod before he spotted the object in the sky? But he said he used his cell phone.

And there's one other thing. When it comes to UFO reporting, you can't and shouldn't always believe what you read.

Whatever this Philadelphia UFO was, it was either videotaped by Garcia over his neighborhood in the City of Brotherly Love, or it was a clever CGI or Photoshop fabrication by someone.

Even the on air WTXF-TV news team gave the location of the UFO sighting as the intersection of 7th and Tioga Streets in North Philadelphia (see map image below). With clear Philly references surrounding this story, why is it that at least two other media sources said this all happened over New York City, and that Garcia lives in New York? 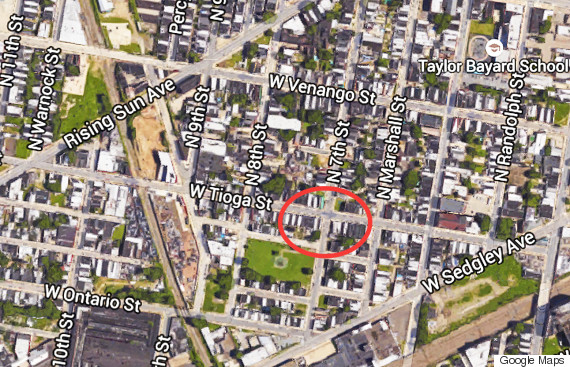 Confusion is the end result when UFO stories are reported by media outlets that simply don't get their facts straight.