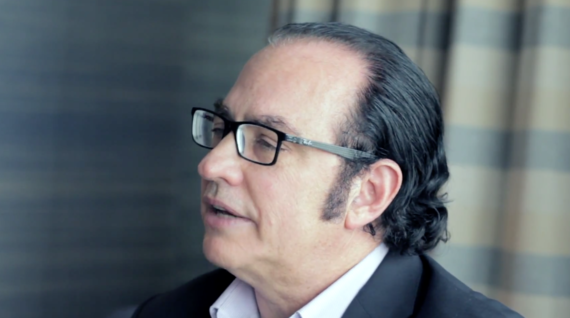 I was recently invited to the Novus Conference to play a very special role in capturing the digital stories from the keynote speakers held in San Francisco, at the Battery. The setting was very intimate and the speakers were beyond world class...some were literally heading into the cosmos of outer space. Brilliant minds coming together to look at what it meant to "Redefine the American Dream". In a series of interviews I will be posting in the coming weeks, you will get to see and hear from some of the most beautiful minds in the world shaping our digital spaces, our artistic spaces, and scientific realms of life.

One of the people I was invited to interview was Neil Jobstein.

When I first met Neil Jacobstein from Singularity University, I was very interested to see what he was working on and where the world was headed through technology, robotics and artificial intelligence. After starting my dialogue with him, I realized that this man was not only an educator, but an innovative mind that will make his place in our historic landscape of true "stewardship" of how these technologies will be utilized in our world.

Neil is an impressive person that left me feeling smarter than I was before I met him. At least that is the story I am sticking to. Here is a glimpse of our very engaging dialogue.

Neil Jacobstein Co-chairs the Artificial Intelligence and Robotics Track at Singularity University on the NASA Research Park campus in Mountain View California. He served as President of Singularity University from October 2010 to October 2011. Jacobstein is a Distinguished Visiting Scholar in the Stanford University Media X Program, where his research focuses on augmented decision systems. He Chaired AAAI's 17th Innovative Applications of Artificial Intelligence Conference, and continues to review technical papers on the IAAI Technical Program Committee. Neil has served as a technical consultant on AI research and development projects for: DARPA, NSF, NASA, NIH, EPA, DOE, the U.S. Army and Air Force, GM, Ford, Boeing, Applied Materials, NIST, and other agencies. He was CEO of Teknowledge Corporation, a pioneering AI company, where he worked on AI applications systems for industry and government. He worked as a graduate research intern in Alan Kay's Learning Research Group at Xerox's Palo Alto Research Center (PARC), and was a consultant in PARC's Software Concepts Group. Jacobstein earned his B.S. degree in Environmental Sciences, Summa Cum Laude, from the University of Wisconsin, and his M.S. degree in Human Ecology from the University of Texas, under a USPHS scholarship with NASA's Environmental Physiology Simulation Program. He spent four years doing environmental research as a Research Associate at the Center for the Biology of Natural Systems at Washington University and CUNY. Jacobstein is a Henry Crown Fellow at the Aspen Institute. He has moderated Aspen Institute Socrates Programs on the technical and ethical implications of advanced technologies, and serves on the Socrates Program Committee. Neil is deeply interdisciplinary, and has a keen sense of how the arts and sciences can integrate. Since 1992, he has served as Chairman of the Institute for Molecular Manufacturing, a 501c3 nanotechnology R&D organization. Jacobstein contributed to the 2005 National Academy of Sciences workshop on the feasibility of molecular manufacturing, and the 2007 Foresight Roadmap for Productive Nanosystems. He is the primary author of the Foresight Guidelines for the responsible development of nanotechnology. Neil has given invited talks worldwide on technical, business, and ethical implications of AI, nanotechnology, and molecular manufacturing. He is a member of AAAS, AAAI, IEEE, and ACM. Jacobstein has served in a variety of executive and technical advisory roles for industry, nonprofit, and government organizations.