I couldn't agree more with the point that Jeremy Rifkin makes in the third part of his series on the Third Industrial Revolution -- countries that entered the 21st century with the most minimal infrastructure stand to gain the most in the coming decades. The benefits of building a state-of-the-art distributed infrastructure from the bottom up far outweigh the liabilities faced in starting from scratch.

The world's fastest growing cities will enjoy undreamed-of agility thanks to these decentralized services -- water, power, broadband Internet -- which are capable of being expanded and reconfigured in response to urban development and climate challenges.

Vast possibilities exist beyond the urban environment. In Africa, Asia and the Americas, the countries which sat out the Industrial Revolution are already seeing local communities rapidly connecting to each other and the outside world via mobile technology. Thanks to the spread of cellular access and cheap phones in these countries, people in geographically isolated areas with unreliable power will increasingly have access to utilities, medical services, law enforcement and mobile phone-based commercial transactions both locally and globally. 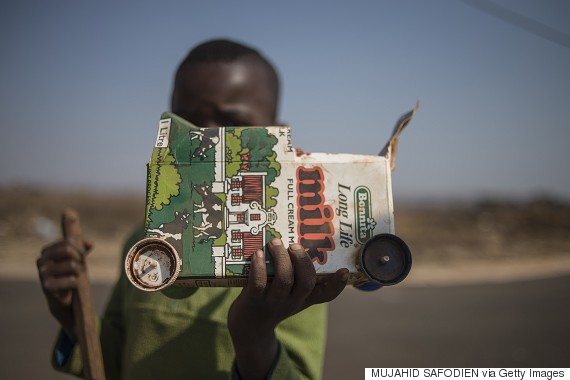 A child holds up a toy truck he made out of recycled garbage near Johannesburg, South Africa. (MUJAHID SAFODIEN/AFP/Getty Images)

On the other hand, I don't agree with Rifkin's claim that "all economic activity comes from harnessing available energy in nature." So-called waste becomes value when technology distributes it to those who would find it valuable. For example, when I finish Rifkin's book "The Empathic Civilization," I can offer my copy to someone who hasn't read it yet. I will use no wood or coal or carbon in this exchange, yet value will be created nonetheless.

Today, thankfully, value arises through the redistribution, repurposing and reassignment of nature's energy without extracting or expending more. While platforms for matching "waste" to a party that values it -- Fanbed, Turo, Breather, Tripping, Hipcamp, Yerdle, Peerby, BlaBlaCar and so on -- use energy and other resources, the amounts are minuscule relative to yet again ransacking nature for virgin materials.

Those of us in industrialized nations benefit from an inheritance -- a century of massive investment in infrastructure -- making it possible to easily tap into expertise, physical transportation and digital networks that dramatically reduce the time, cost and indeed energy required to create something of value.

The new digital "glue" integrating water, energy, transport and waste systems in cities around the world is erupting with data. This information can be used to reduce waste by intelligently redirecting resources based on need. This machine-to-machine Velcro, so to speak, in the form of artificial intelligence and the Internet of Things, creates a responsive, energy-efficient system from what was simply an agglomeration of disassociated services. While renewable energy is on the rise and, indeed, must be, we are witnessing a moment where we as a global society are beginning to pause and question before discarding something that might be of value to someone, no matter how remote or disconnected.

We as a global society are beginning to pause and question before discarding something that might be of value to someone, no matter how remote or disconnected.

Among the many potent and timely lessons the West can learn from those who weren't at the helm of the First or Second Industrial Revolutions is this: value and waste are forever intertwined. Beauty is in the eyes of the beholder, and the appreciation for this truth grows as the dawn of a paradigm shift becomes ever more obvious. When telling me a story about his life in Hong Kong, where surplus real estate is an oxymoron, renowned architect Bill McDonough said, "A Westerner says 'throw it away' but in Hong Kong it's easy to realize: 'There is no away!'"

In industrialized nations, we have been living a convenient lie -- that waste comes at no cost and can be tolerated -- to bolster our fortunes and stave off fear. Societies experiencing extreme population growth have no choice but to be pathologically ingenious. For example, Nairobi-based BRCK offers rugged, portable, affordable Wi-Fi hotspots to address the severe consequences of unreliable Internet on a growing economy. The BRCK team is committed to bringing its peer-based Internet services to the vast portion of the African population still disconnected from the global Web.

As an entrepreneur, I've honed my skill at spotting system failures. The global population outside today's major financial centers is teeming with entrepreneurs who have practical and ingenious solutions for solving the world's biggest challenges, starting with their own villages.

We are living in an age when factories are at our fingertips. OpenExplorer and Maker Faire connect makers to mentors and other makers, forming global innovation communities that spark action rather than frustration. Renewable energy sources, sensors, food recovery tools -- potential solutions for all the world's most critical challenges -- are being tested around the world not by mega-corporations but by us, the under-20 set in particular. 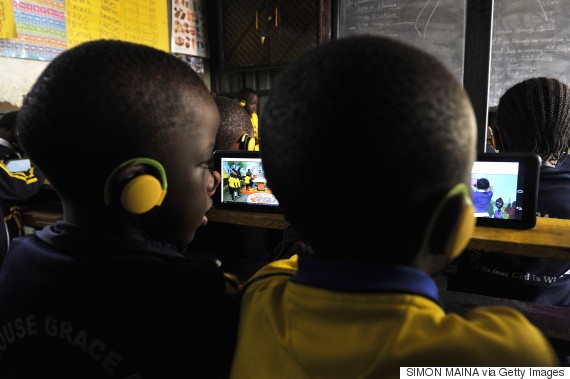 All of this marks a profound shift in our social operating system, or our socialOS, in how we value and trust the people and "things" we would in previous eras have fought to control or own. We are only at the beginning of redefining our socialOS, as it's baked into our institutions, practices and software. As part of this shift away from trust in institutions to trust in each other, we are beginning to redefine the way that value is created and captured and by whom. In the first phase of the "Sharing Economy," according to a database maintained by the investor and analyst Jeremiah Owyang, we have seen over $126 billion of investment capital pour into ventures built on these business models. While the peer-to-peer marketplace model has been directed towards transportation, lodging, food and finance (to name a few), the potential of this shift has only been scratched.

The real opportunity here is to align how value is created with how it is captured. That $126 billion of investment in sharing companies to date has been in companies built following last century's prevailing socialOS, where the lion's share of the value captured accrues to the few: founders and investors, as opposed to the peers in those peer-to-peer marketplaces.

The socialOS is shifting rapidly. Talented entrepreneurs are honing their offerings along with their sensibilities to shape the world they want to see. Capitalism is winning, but not entirely at the expense of the masses, thanks to people like Shivani Siroya, whose InVenture offers new forms of credit for the developing world, and Komal Ahmad, whose Feeding Forward marketplace matches surplus food with hungry people.

In the next phase of our global economy we will see experimentation and ultimately adoption of peer-to-peer models where value creation mirrors value capture and the people who actually provide the value in each marketplace reap most of the benefits. New technologies like blockchain are critical to this, as it calls for an open and distributed framework for interpersonal transactions that reach beyond a single company or government ownership.

Everledger, Wave and Filament are strong, early examples of how blockchain as an ethos and a framework lays the foundation for building and scaling systemic collaboration as never before.

There's a reason for relentless optimism in the face of conspicuous uncertainty. You cannot innovate if you're not optimistic about the future!

Author, 'The Mesh: Why the Future of Business is Sharing'