It used to be that “going steady” meant getting pinned. Boy meets girl, boy gives girl fraternity pledge pin, and other boys back off. Eventually, pinning gave way to “making it Facebook Official,” then replaced by the nebulous practice of spreading the news by word of mouth. No trinkets, no status updates and no real clarity. Yet according to the Pew Research Center's latest survey, several new symbols of romantic devotion have taken hold among couples: the shared password, the joint email address and the fused social media profile.

Along with having The Talk and meeting parents, creating joint accounts and passing passwords have apparently become relationship benchmarks. Moving inboxes together is the new moving in together. “Adults who are long-partnered use technology in their relationship, but are more likely to use some of it together—by sharing email addresses and social media profiles as a couple,” reads the Pew report, which based its findings on a survey of over 2,000 American adults. When it comes to a couple's likelihood of creating a single email account and social media profile, “the duration of the relationship is a more important factor than the age of the individuals,” Pew's report adds. 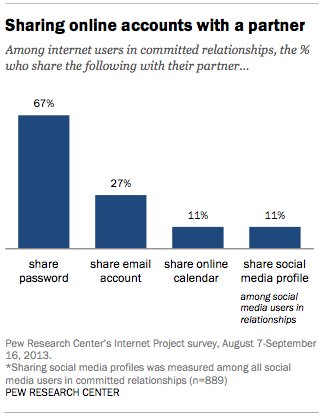 Among partners who’ve been together fewer than ten years, 8 percent share a social networking account, while 14 percent of couples together over ten years have a shared profile. Couples aren't necessarily shutting down their personal accounts in favor of a connected one, but might be "moving in" to a third, shared profile as part of a larger nesting process that goes along with getting serious, like buying furniture or a puppy together. The frequency with which couples share social media profiles is virtually identical for different age demographics, Pew found. (Ten percent of people 18 to 29 years old have a social media account with their partner; 11 percent of people over 65 do so, too.)

For single people, this may now mean an entirely new relationship threshold to worry about: Stop asking when you’ll meet her mother, and start wondering when you’ll share a Facebook page.

A similar pattern holds true for email, Pew found. Ten percent of couples who’ve been together five years or fewer use the same email account, a figure that jumps to 24 percent for couples together six to 10 years, and climbs to 38 percent for couples who’ve been together over a decade. In this case, older couples are more likely than their younger counterparts to agree to a single inbox. Two-thirds of all couples have exchanged passwords to their online accounts, a ritual that’s almost equally common among millennials, 30-somethings and the middle-aged. 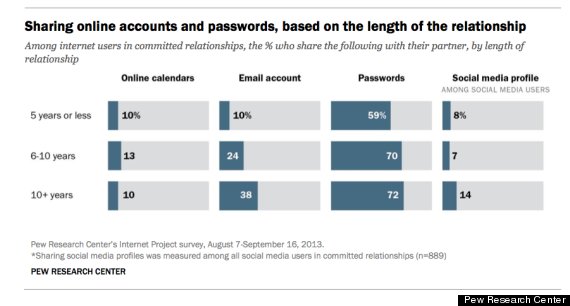 These fused online identities aren’t necessarily as romantic as penning poetry or offering big rocks, however. Sharing passwords can be purely practical, allowing couples to get two Netflix accounts for the price of one or enjoy all the perks of Amazon Prime without ponying up another $79. For jealous lovers, exchanging passwords can help them more easily and openly spy on each others’ correspondence. Some spouses and partners have also created joint profiles on online dating sites in the hopes of soliciting a third individual for threesomes. And others in longer relationships might have, out of convenience, set up a single account during their initial forays onto Instagram or Hotmail, rather than later switching to a shared account as a grand gesture of their love. “It’s about timing,” wrote Amanda Lenhart, lead author of the Pew report, in an emailed statement. “[I]n many cases these couples were together when they first started using the technology and began using it as unit, while those who have been in a relationship for a shorter period of time were still independent actors when they first set up their accounts.” But there are certainly couples for whom the combined virtual identities function as a pin or a ring. The single profile offers a way to broadcast their adoration for one another, no matter how saccharine it might appear to those who see it. What to them seems a sweet gesture of their affection can look to the rest of the world like one very long, very unavoidable form of digital PDA. “Dave and I are one of those unique couples who have always been really in tune with each other," a woman who shares an Instagram account with her husband told Mashable last year. “We've been inseparable since 1991 and we know each other inside out. Other couples might want to keep their singular voice, but our identity has always been about being together." A relationship therapist interviewed by Mashable wasn’t as smitten by this joint-account gesture. “Psychologically, when couples share social media accounts, it more likely than not is a sign of codependency or insecurity,” Suzana Flores, the therapist, told Mashable. “It’s almost like the couple is ... too enmeshed."