Shark attacks are increasing in Hawaii, especially off Maui, and scientists think they have figured out why.

A report due to be released next month by University of Hawaii marine biologists basically concludes that a burgeoning recreation industry is butting up against shark-friendly environmental conditions to create a double whammy of sorts, at least for the human population.

“The coastal habitats around Maui are optimum habitats for tiger sharks, there’s nothing unnatural happening,” says Carl Meyer, a shark researcher at the Hawaii Institute of Marine Biology. “It’s just that we as people have inadvertently created these high-use, recreational ocean locations right next to these habitats that large sharks have been using for eons.”

Meyer and other biologists have been studying the issue of increasing shark attacks at the request of the Hawaii Department of Land and Natural Resources. The DLNR commissioned the study after two people were killed by sharks in Maui’s waters in 2013.

Civil Beat created this animated map of shark bites from a list compiled by the Hawaii Department of Land and Natural Resources.

In the last three years, the number of shark attacks in Hawaii has tripled compared to the number of attacks 10 to 15 years ago, according to a comprehensive list of shark incidents maintained by the DLNR.

And, since 2012, more than 60 percent of all shark attacks in the Aloha State occurred just off Maui.

All fatal shark attacks in the last 20 years in Hawaii have occurred near Maui, and three of those happened in the last three years.

The most recent attack was in April. A 65-year-old woman was killed by what is presumed to have been a tiger shark as she was swimming off Makena. The incident made headlines worldwide.

Meyer and his UH colleague Kim Holland conducted the two-year study of tiger shark behavior on Maui. They outfitted about two dozen tiger sharks with tracking devices. You can watch the sharks cruise – mostly around Maui – on the Hawaii Tiger Shark Tracking webpage.

“We had almost no information about the movement of sharks around Maui (before we did the study),” said Meyer. “It’s a complex situation, but it may simply be, that all things considered, there’s a higher probability of people encountering sharks in the water on Maui.” 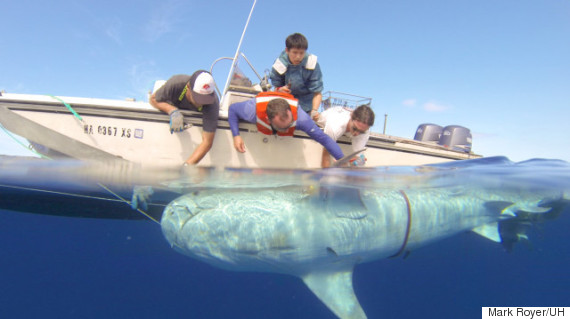 The scientists found that tiger sharks prefer to hang around in the shallower waters along the coast of the island, an area also called the insular shelf that slopes off into deep water. On Maui, there is more of that kind of shelf habitat than on any other of the main Hawaiian islands, Meyer said.

Maui has a local tiger shark population but the area also often attracts visiting sharks that come to the area to feed or reproduce, he added.

Tiger sharks have a very broad diet, and there is really no evidence that fishing has ever limited tiger sharks’ food supply in Hawaii, Meyer said. This could mean that tiger shark numbers have been fairly stable for years.

Instead, what has changed is the number of people venturing into prime tiger shark habitat, like the waters off of the popular tourist destinations such as Makena and Kihei, Meyer said.

In recent years, more people are participating in activities that put them directly in the shark’s home territory, like swimming, snorkeling, stand-up paddle boarding and sea kayaking.

The more people that wade into the shark’s world, the more likely that there will be human-shark encounters — even attacks.

“The animals have been doing basically the same thing … the behavior of the sharks has not changed,” Meyer said.

Data from activities-during-shark-a.silk.co
What were people doing when they got bit by sharks? Here are the most popular activities. Other activities include standing in the water, fishing and wading.

While the number of shark attacks is on the rise in Hawaii, there are fewer attacks worldwide. The number of attacks elsewhere is at its lowest point since 2009, according to the International Shark Attack File, which has been documenting all known shark attacks since the 1950s.

The International Shark Attack File, which is managed by the University of Florida, was started in 1958 when researchers were primarily concerned about sharks biting people people after ships and aircrafts crashed at sea.

Only three people were killed by shark attacks last year, which is surprisingly low considering how many hours people spend in the ocean every day, according to the ISAF.

And, there’s actually been a decrease in the fatality rate of shark attacks in the last 110 years, the ISAF report said.

This can be partly explained by upgrades in medical treatment and increased public awareness. For instance, the United States’ shark attack fatality rate is significantly lower than the rest of the world, in part because of emergency medical care and well-trained lifeguards, according to the report. 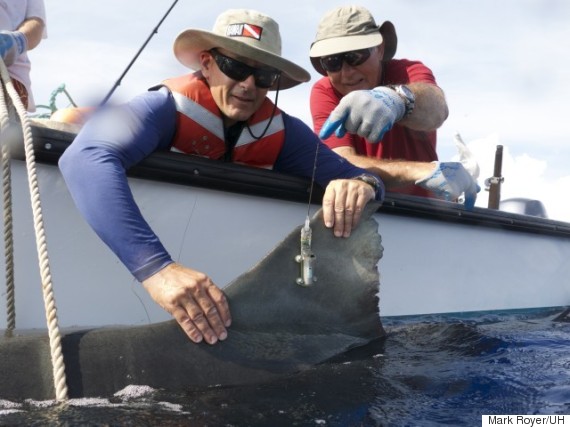 Carl Meyer, left, and Kim Holland attach a tracking device on the dorsal fin. The device pings to a satellite if the shark is above water. A second device is surgically implanted and its signal picked up when the shark is underwater.

Most of the shark attacks in the world actually occur in the U.S., mostly off the Florida coast. Of 409 recoded attacks in the last decade, 219 happened in Florida and 55 here in Hawaii.

Meanwhile, Australia ranks second in the world in shark attacks, with the ISAF recording 123 in the past decade. South Africa is third with 40.

All data in the following map was collected from the International Shark Attack File.

25 Ways To Avoid A Shark Attack