Exporting shark fins is a lucrative business in Costa Rica, where it appears fishermen are exploiting a legal loophole to get as many of them as they can -- no matter the environmental cost.

Earlier this month, the Costa Rican National Coast Guard notified Interpol that some fishermen have been employing a gruesome technique of mutilating sharks to circumvent national legislation that states the animal's fins must be "naturally attached" to its body when it's brought onto land.

Grisly images provided by Interpol show butchered sharks with only a band of skin to keep the fins attached to the spine. The rest of the body is thrown out at sea, enabling fishermen to transport many more fins. 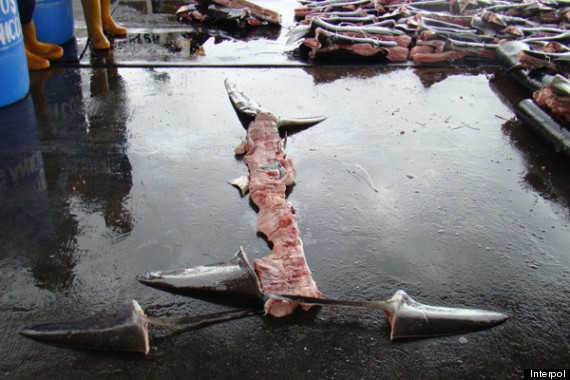 "This is surely against the spirit of the law," Sonja Fordham, president of Sharks Advocates International, told The Huffington Post over the phone. "It's really very disappointing and upsetting."

The law dictating that fins be "naturally attached" to sharks when they're landed has been enacted in about 50 countries worldwide, according to a 2012 report by the Pew Environment Group.

Conservationists believe this law is one of the better ways to end the brutal and wasteful fishing practice of shark finning, which involves the slicing off of a shark's fins before the dying animal is discarded at sea. Fordham called the ban a "widely recognized best practice."

Costa Rican authorities say that by alerting Interpol to the gory butchering tactic they've uncovered, they hope to warn other nations of the law's loophole.

“Improved communications and increased sharing of information between countries provide law enforcement with an added advantage and facilitate the identification of criminals and new criminal techniques. Costa Rica’s use of Interpol's system of notices is a perfect example of this,” David Higgins, head of Interpol's Environmental Security unit, said in praise of the country's announcement, per a written statement. 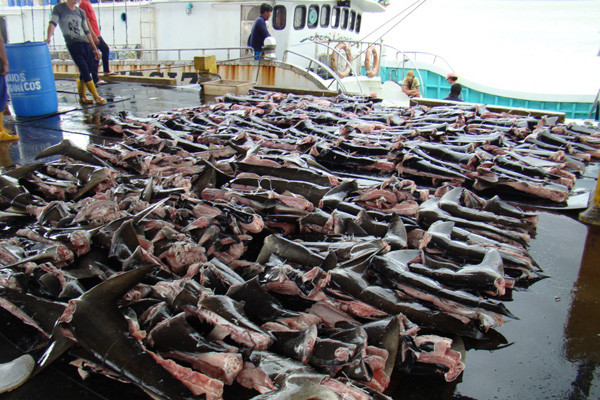 For now, this butchering practice appears to be limited to Costa Rica, said Max Bello, senior advisor for the Global Shark Conservation initiative of Pew Charitable Trusts, in a conversation with The Huffington Post.

"Costa Rica is a major exporter of shark fins," Bello told HuffPost. "The fishermen are particularly creative, I think. They're always trying to find new ways to get around the law."

According to digital news outlet Quartz, Costa Rica has been a major shark fin exporter for years. In 2011 alone, approximately 350,000 to 400,000 sharks were reportedly killed for their fins in Costa Rican waters.

Last year, as pressure from environmentalists mounted, the Costa Rican government announced a blanket ban on shark finning. Though the practice had been outlawed in the country since 2001, the transportation and importation of fins from other countries had till then been legal.

"Costa Rica may set an example to the world when it comes to environmental protection, but it must be noted that we had a significant lag when it comes to protecting the oceans," President Laura Chinchilla said at the signing of the recent law, per Reuters.

While killing the animals for food is still allowed under the ban, all sharks that are brought onto Costa Rican land -- including those imported from other countries -- need to have their fins "naturally attached."

Unfortunately, as this new Interpol report shows, none of these regulations has ended the practice of finning. 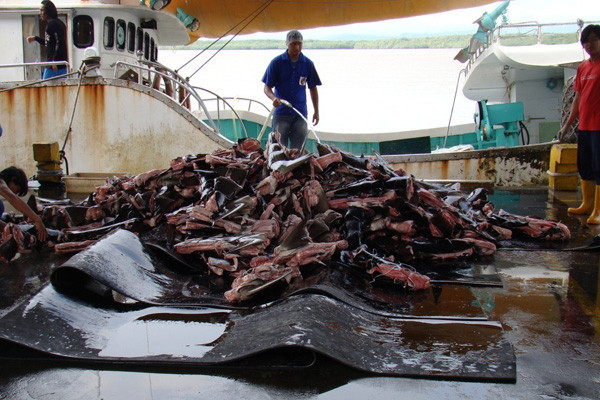 Some environmentalists say the existing law should be adjusted to close all loopholes.

"Fishermen are often innovative," Fordham told The Huffington Post. "Costa Rican law has evolved before on this issue, and regulations need to be be tweaked so that this [practice] is completely illegal."

But others say these sorts of regulations may not be enough anymore.

"The laws right now are clearly not working. We need to step up on the legislation," Bello said. "The fishermen will keep trying to find something new."

The only real solution, according to Bello, is to ban the exportation of shark fins from Costa Rica completely.

"It might not be easy. There's a big fishery and many fishermen, but we need to agree on one thing: The fin market is unsustainable for the shark population," he said. "Costa Rica has an incredible reputation when it comes to sustainability and eco-tourism, but they are losing credibility with these kinds of issues."

Stopping the sale of all shark fins and other shark products, including the animal's meat and cartilage, is the shark conservationists' goal.

"Banning finning alone is not sufficient to save sharks," said Fordham. "They are generally a vulnerable species, and they are very vulnerable to overfishing. More than finning bans, we need strict protections for threatened species, quotas, etc. All of this is still lacking."

"We all agree on shark finning, but we need to start talking broader. Shark overfishing is absolutely out of control all around the world. Populations of most species have already been depleted heavily, and we're depleting sharks to the point of non-recovery if we keep going this way," he said. "We are not taking account of what we're doing to sharks, and that's very, very scary."

In a report released earlier this year, researchers said that approximately 100 million sharks are killed annually.

To get a sense of just how staggering that number is, scroll down to see a horrifying infographic on the approximate number of sharks killed each hour. Then visit the websites of Shark Advocates International and the Pew Charitable Trusts' Global Shark Conservation initiative to find out more about shark conservation and how you can help this vulnerable animal.