A sandbar shark being transported in a tractor trailer died on Wednesday afternoon in Volusia County, Florida, after the vehicle blew a tire and ran off Interstate 95.

The trailer crashed into a wooded area off the road around 2:20 p.m., authorities told the Daytona Beach News-Journal. The shark, one of four being transported, died after being ejected from its tank in the crash, according to NBC affiliate WESH, although it's unclear whether it ended up outside the trailer.

A team from SeaWorld rescued the remaining sharks and brought them to the Orlando park for the time being, SeaWorld spokeswoman Becca Bides told The Huffington Post on Thursday.

The sharks were en route from Marathon, Florida, to the New York Aquarium in Coney Island, Brooklyn. 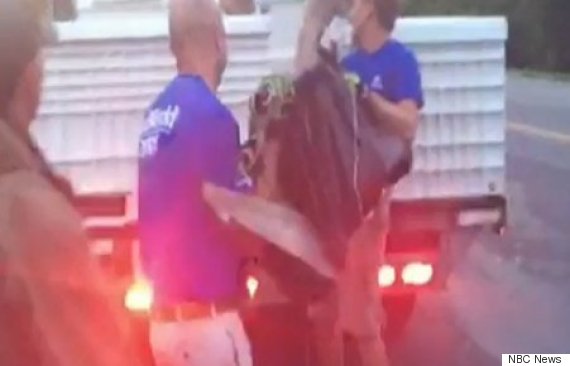 A SeaWorld rescue crew transports a shark following a crash on I-95 Wednesday.

The sharks, which each measured about 5 feet long, were being transported in individual aquariums within the trailer. The tank containing the shark that died was "jostled and damaged" in the crash, police told the News-Journal.

By 8 p.m., the SeaWorld rescue team had transported the surviving sharks to new tanks in a different truck. Footage of the rescue operation showed the team hauling the sharks inside black tarps from the crashed truck into the new one.

The three surviving sharks will remain at SeaWorld until arrangements can be made to bring them to Brooklyn, according to the New York Daily News.

None of the three human passengers aboard the truck were injured, police said.