Two young surfers were photobombed by what appeared to be a shark, and everyone lived to tell the tale.

June Emerson, who took the photo, said she didn't realize she caught the shark in the photo, which features her 12-year-old son Quinn and his friend in the water at California's Manhattan Beach, KABC reports. In the photo, the boys can be seen on their surfboards, staring down a wave. Just behind them, a shark-like figure looms. 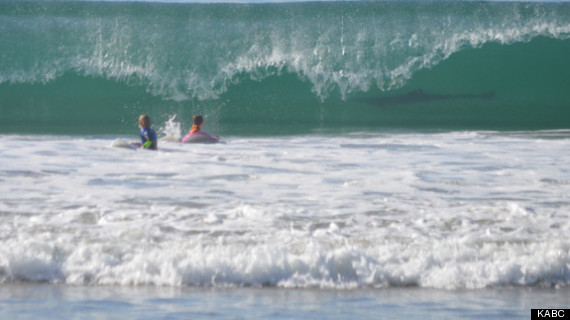 It's unclear what kind of shark it was, but Emerson said there have been great white sightings in the area lately.

"It was quite a shock to see," she told KTLA. "Many local surfers and lifeguards have seen this and believe it to be a shark ... Of course, I told my kids it was dolphin, as we live at the beach and are in the waters here almost daily."

See more crazy animal photobombs by clicking here or by checking out the slideshow below.