Nestled to the northwest of the Island of New Guinea, within Indonesia's West Papua Province, there is a 46,000 square kilometer stretch of ocean spotted with a stunning chain of small islands named Raja Ampat (the Four Kings). Sitting at the center of the Coral Triangle, Raja Ampat is famous for its unparalleled marine biodiversity-there are more marine species recorded there than any other place on Earth of that size.

Recognizing Raja Ampat's natural beauty and the value its intact ecosystems provide for local communities in the form of food, coastal protection, and tourism revenue, the communities and government of Raja Ampat have established a network of marine protected areas (MPAs) throughout its borders and further designated the entire area a shark sanctuary. These efforts are starting to pay off, with fish -- especially higher predators like sharks -- starting to rebound inside the MPAs.

Unfortunately, these increases make the area a target for illegal activity. In an incident last week, that was reported on by the Washington Post and Jakarta Post, 33 poachers were caught red-handed within the borders of the Kawe MPA, one of the MPAs within Raja Ampat, an area which is under local, regional, and national protection and over 97 percent of which is entirely closed to fishing. Tragically, they had already caused substantial damage by killing large quantities of sharks and other marine life. 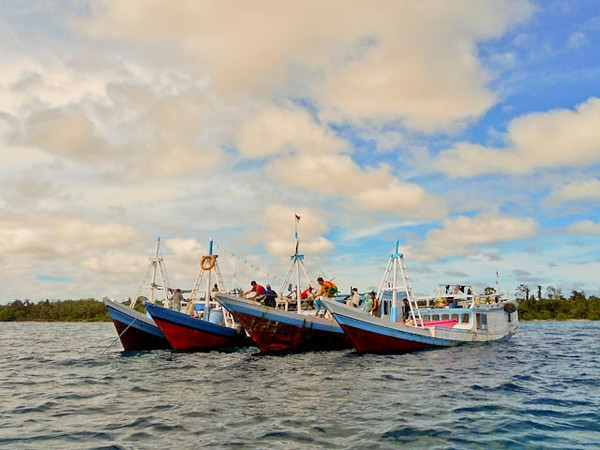 Fishing vessels tethered together after being apprehended by the Kawe joint patrol team.

What makes this story unique is not what the poachers took out of the water -- an estimated market value of $160,000 USD of shark fins, shark and ray carcasses and sea cucumbers. No, the exceptional part of this story is that these fishermen were intercepted and stopped by a local community patrol led by the rightful custodians of this area, the Kawe tribe.

Up through the beginning of this century, the region had been notorious for illegal fishing activities like blast fishing and shark finning, mostly conducted by outside fishermen who had come to Raja Ampat after depleting their own waters. In 2006 however, the Kawe people, whose lives depend on the natural resources of the sea decided to take action. They declared a 383,000 acre MPA, eventually recognized by the regional and national governments, and took back control and protection of their own resources. 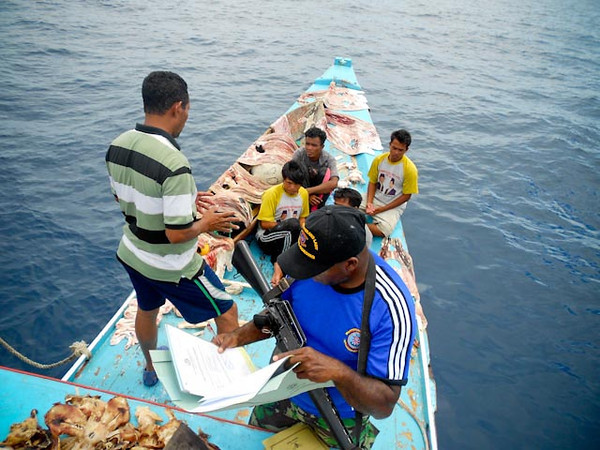 While Raja Ampat police officer reviews the vessels documents, a staff member from Conservation International, Abraham Goram, that supports the local communities and governments in their managment of the MPA, exaplained the protected area status of Kawe to three of the fishermen.

Managed and patrolled by the local villagers for six years, the Kawe MPA began to see results as reefs damaged by explosive fishing started to grow new coral and the shark population began to rise. In this part of the world, that rebound in the shark population can bring a lot of value. Marine tourism is one of the most important and fastest growing industries in Raja Ampat and is already bringing significant revenue and livelihood opportunities to the local communities and government. The revenues generated from tourist fees alone contribute an additional $380,000 per year for social programs and conservation actions that directly benefit the local communities, on top of the jobs and revenues created through tourism businesses.

Unfortunately a resurging shark population is also a strong motivator for fishermen to risk entering protected areas like the Kawe MPA.

The Kawe tribe protects the area for the benefit of their children, so they guard it bravely and passionately. When reports came in, late on a Sunday evening, that seven fishing vessels were in their no-take waters, they rushed into action -- quickly getting support from the regency government of Raja Ampat and the Indonesian Navy for a mission to intercept the poachers the following day. 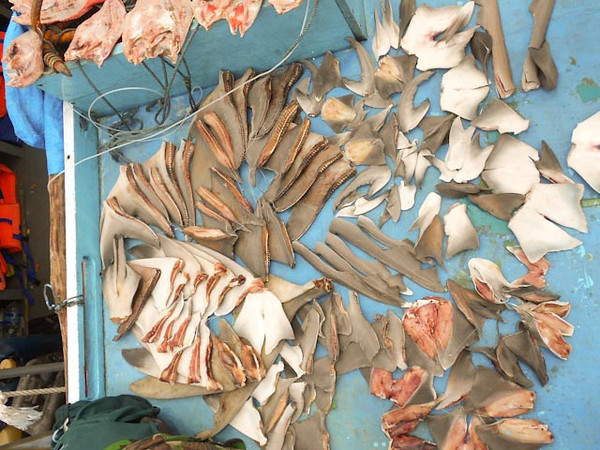 Fresh shark fins drying on the deck of one of the apprehended vessels.

Thankfully for all involved, the tense situation when the patrol boat stopped the seven fishing vessels and the patrol members boarded the ships did not erupt into violence. They seized all of the poacher's catch, their documentation, and all of their illegal long-line fishing gear (used to catch sharks) and compressors (used to harvest sea cucumbers).

Unfortunately the patrol was unable to bring the poachers into custody due to the difficulty of controlling a large number of now angry poachers on seven different boats with only a small patrol team. The boats fled and unfortunately still remain at large. Action must now be taken to bring them to justice; the chase is on to recapture them.

When their territory was under attack, the rightful custodians of this natural wonder, the Kawe tribe, took action to fight for the resources that they depend upon for survival -- with support from government, the navy, and conservation organizations.

While the people of Raja Ampat still have many challenges ahead, their story is proof that communities can be empowered to protect their own resources, and an inspiration to the thousands of community groups and governments around the world who are working to protect their marine ecosystems from similar threats. The ocean and the life within it are too valuable to give up without a fight.