When two enormous tiger sharks were trailing Meredith Novack on her record-breaking swim from Lanai to Maui last month, she claimed the only thing that kept her alive was her Shark Shield, a device that uses electric waves to fend off the predators.

Shark Shield shares her confidence. The company announced this week that it will give 30% off its Shark Shield Surf 7 device to the first 300 surfers willing to get back in the shark-infested waters of Reunion Island.

Reunion Island, near Madagascar, banned swimming, body boarding and surfing this summer after suffering 10 shark attacks in two years, three of which were fatal, including the death of a 15-year-old girl and a famous local surfer.

The ban was lifted Oct. 1, and by encouraging surfers to get back in the water using its product, Shark Shield is employing a high-stakes publicity strategy that could either pay off swimmingly or backfire bloodily.

The Shark Shield uses two wave-emitting electrodes that create a protective field around a swimmer, diver or surfer. Sharks have gel-filled sacs called Ampullae of Lorenzini, which they use to sense electrical fields given off by possible prey. When a shark senses the electric wave caused by the Shark Shield, the intense discomfort causes the shark to swim away.

The product comes in three versions, one that attaches to a diver or fisherman’s ankle, another that mounts on a board, and a third specifically designed for military or technical divers. 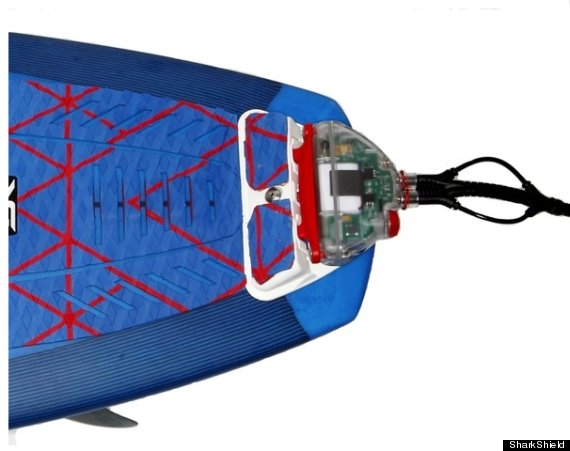 The company claims that in a 2012 study in South Africa, a seal decoy hanging off a boat caused 16 great white shark breaches. After scientists turned on a Shark Shield, the decoy was used again and no sharks breached.

Watch video of a diver using the Shark Shield to deter various sharks, including a Great White.

Along with the swimming and surfing ban, Reunion Island simultaneously implemented a widely-criticized shark culling program, planning to kill 90 sharks in an effort to curb attacks.

Shark Shield sees its product not only as a lifesaver for humans but also for sharks. If the shield can prevent attacks, culling programs will no longer be perceived as a necessary solution to shark attack crises.

The “Surf Any Break Without Intimidation” promotion is only available for the month of October. Surfers can buy the Shark Shield Surf 7 at a discounted rate of $399 on the Shark Shield website by using the promotional code “SURF-REUNION.”