For two decades Jason Cardiff was the marketer behind the scenes of some of the most recognizable direct response advertisements in the U.S. and U.K. Cardiff distinguished himself by taking on projects that were occasionally associated with socially-taboo topics. Now Cardiff is CEO & Chairman of Redwood Scientific, a privately-held company that develops and markets thin-film (think of oral Listerine strips) delivery products. Redwood's lead product, called "Prolongz", aims at treating premature ejaculation or prolonging sex for men.

Before starting Redwood, Cardiff founded Kelly Media Group, a full-service media and direct marketing company that did the back end work for campaigns like Beachbody - Shaun T's Insanity and P90X training programs - and Feed the Children. Kelly Media grew to $50M+ in revenues, operating in with operations in 5 countries.

The success, however, was not without controversy. Cardiff's Kelly Media Group provided marketing and TV production for self-proclaimed televangelist and faith healer Peter Popoff, who was also Cardiff's father-in-law at the time. The widely popular minister was exposed as a fraud on The Tonight Show with Johnny Carson.

Cardiff's next consumer product initiative was e-cigarettes ("e-cigs") company Cigirex. With sales and distribution in mind, Cardiff appointed Jacob Busch, the heir to the Anheuser-Busch fortune, as CEO. Cigirex utilized the experience of the Busch family to grow into a global brand. In 2014, Cigirex was a top 10 selling e-cig according to consumer information company Nielsen. Cigirex was acquired by an independent national beverage distributor in late 2012.

Though Cardiff has ventured into areas that may be condemned, his track record for success is irrefutable. Now with Prolongz, he's transforming premature ejaculation from a taboo subject to locker-room talk for millions of men who want to last longer in bed.

According to data compiled from Google search, men Google more questions about their sexual organ than any other body part; more than about their lungs, liver, feet, ears, nose, throat and brain combined. Men's second-most common sex question is how to make their sexual encounters last longer. The most commonly asked question regards penis size.

Google Trends show that premature ejaculation has similar interest levels to erectile dysfunction or "ED", indicating that demand for a product that would aid in longer-lasting sex could be estimated in the billions.

Premature ejaculation is not recognized as a medical condition in the US. Rather, Redwood hopes Prolongz will gain widespread use as a "lifestyle" product, much the same way Pfizer's 'Viagra' made its way into popular culture over a decade ago. In the late '90s, the little blue pill was hailed as a sexual revolution for the treatment of ED. As a result, Viagra became one of the fastest-selling drugs with nearly $800M in first year of launch (below). 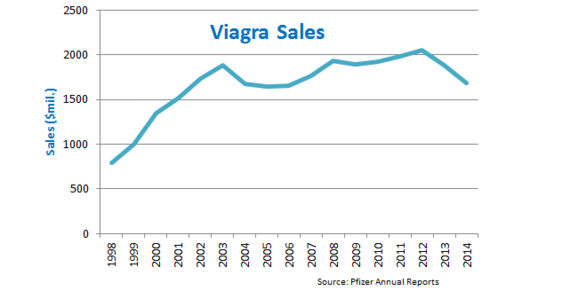 Prolongz is not the only product on the market intended to make men last longer during sex; competitors include Plethora, Promescent and PremaStop. However, Prolongz is the only oral sublingual product, and is also the product registered with the FDA (link to FDA registration here). Plethora et al. are topical, meaning absorbed through the skin, and are awaiting FDA registration.

"Prolongz differentiates itself from competition in two ways. We are the only oral sublingual product on the market to treat PE. This allows our product to hit the blood system quickly and efficiently. Second, FDA registration gives Prolongz a stamp of approval. The accompanying product code validates that our product's manufacturing, packaging and safety are held to the highest of standards," said Cardiff over a telephone interview.

According to the Jordan & Whitney report, an industry publication that tracks infomercial traction, Prolongz ranked #1 among infomercials advertising health & wellness products in April and has ranked in the top four in the last eight months.

Prolongz caught the attention of Shark Tank personality Kevin Harrington - known as the inventor of the infomercial. Harrington joined Redwood as a member of the board of directors and now helps oversee international and domestic retail distribution for Redwood.

"Prolongz has all the characteristics to be a home-run consumer product around the world. It satisfies an unmet need and has the right team surrounding it. I look forward to contributing to the domestic and international success of Redwood's products," Harrington expressed when asked what attracted him to the company.

To add to the momentum, Google, which usually has tight restrictions on sex-related and other types of taboo advertisements, will be in charge of Prolongz's online marketing campaign. The search giant's internal advertising unit called Google Media picks 12 companies a quarter to partner with on online marketing.

Cardiff believes that "Our initial sales traction with Prolongz, Jordan & Whitney's validation and the fact that we didn't have an online presence is what I think interested Google in partnering with us. We couldn't be more excited to have the leader in online advertising in our corner."

Prolongz's skeptics wonder if the product actually works, to which Cardiff replies, "We offer a 15 day trial for consumers to try Prolongz and offer a money-back guarantee. We're also working on getting more clinical evidence out there. The hundreds of thousands who have used Prolongz are satisfied."

Because Prolongz treats a condition that the FDA does not recognize as a disease the company did not undergo extensive clinical testing. Instead, Redwood relies on prior studies of Prolongz's active ingredients, ginseng and damiana, to support the claim that the product will lead to longer-lasting sex in men.

So far, Redwood Scientific has executed on their objective of owning the three main marketing channels: television, online and retail distribution. Bringing the right team members on board has been a necessary step in the process of transforming Prolongz into a recognizable and global brand. Cardiff hopes that Prolongz will be available in Walgreens, Rite-Aid, and Walmart nationwide by Q3 and says an IPO is in the plans for later this year.