Rick Shenkman is the editor of the History News Network and the author of Political Animals: How Our Stone-Age Brain Gets in the Way of Smart Politics (Basic Books, 2016), from which this article is drawn. You can follow him on Twitter. He blogs at stoneagebrain.

One day in 1891, a wealthy world traveler who enjoyed puncturing public myths offered $500 to anybody who could prove that a shark had ever attacked a human being off the East Coast of the United States. The offer drew headlines. People were sure he'd have to make a payment. They were wrong.

This came as no surprise to the country's leading shark experts. They had long reached the conclusion that the man-eaters that sailors often talked about darkly were highly unlikely to appear in our non-tropical waters. There simply was no proof, the experts categorically stated, that sharks found in the vicinity of America's East Coast seaside communities ever went after human beings, except perhaps by mistake. What then lay behind the grave fear of sharks among people living along the coast? The experts chalked it up to pure superstition. They maintained this for decades.

In 1916, on the eve of the summer vacation season, as they had on occasion in the past, the experts reassured the public that they had nothing to fear from sharks. This wasn't a matter of opinion, they insisted. It was science.

And then the calendar page flipped to Saturday, July 1.

That day, the Vansants of Philadelphia crossed the Delaware River into New Jersey in time to catch the 3:35 p.m. train from Camden to the Jersey Shore. A little after 5 p.m., they arrived in Beach Haven, an elegant resort community some twenty miles north of Atlantic City, and then checked into The Engleside Inn, one of the finest hotels in the area. While his parents relaxed, Charles Vansant, dressed in a black swimsuit that stretched from his knees to his neck, headed to the ocean for a swim. It was shortly before 6 p.m.

Vansant was a college man. He had made varsity in two sports, golf and baseball. Upon hitting the water he fearlessly swam farther out than anybody else. But as a group of onlookers watched him playing with a paddling dog, he suddenly began to shriek for help. Something was dragging him under.

It was a shark. As Vansant fought for his life, his blood turned the seawater bright red. A brave lifeguard quickly swam to help, dragging Vansant toward shore. But the shark hung on. Not until the fish scraped the pebbles on the bottom of the ocean as they neared shore did it finally swim off. By then it was too late. Little more than an hour after he had stepped off the train from Camden, Charles Vansant, athletic and fearless, was dead. He was twenty-five years old.

Five days later Charles Bruder, the bellboy captain at the Essex and Sussex, a top-notch hotel in Spring Lake, forty-five miles north of Beach Haven, went for a swim on his lunch break. In full view of hundreds of tourists, including the well-known socialite Mrs. George Childs, a shark attacked him. Mrs. Childs reported seeing the shark dart at Bruder "just as an airplane attacks a Zeppelin." As he screamed, the shark took off his right leg above the knee and then went after his left foot. Women watching the gruesome scene vomited and fainted. Charles Bruder, in shock, died shortly thereafter on the beach, his body a tangled mess of bones and cartilage. He was twenty-eight years old.

More shark attacks followed. In one attack, a shark ventured up a creek all the way to the small New Jersey community of Matawan, sixteen miles inland, far past where anybody had ever thought a shark might go, and killed a boy out for a swim and a man who tried to save him. Finally, a seasoned angler, fishing from a beat-up boat early one morning, caught a shark and killed it. Though no one was sure this one shark had been responsible for all of the attacks, its death ended the terror that had gripped the seaside communities of New Jersey for two weeks and ruined the local economy. No one else that summer felt the jaw of a shark sink into their flesh.

Future generations eventually forgot about the shark attacks that took place in the summer of 1916. But the fear of sharks never faded. In 1974 the late Peter Benchley wrote a quick-read novel about a shark that terrorized a community one summer. The book went on to sell millions. It was called Jaws.

Were this a piece of fiction, I'd be writing that Benchley based his book on the 1916 attacks. Benchley, however, always denied it, though he lived for a time in southern New Jersey. You can believe his denial if you wish. I never have. 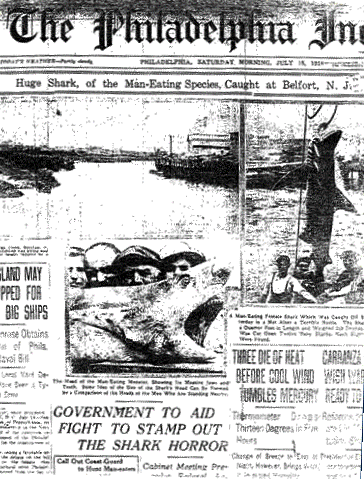