As society struggles against the threats of surging population, climate change, biodiversity loss and degraded land, water and marine systems, what on earth could we possibly learn from a near-pristine atoll free of people in the middle of the Pacific Ocean?

I went diving at Palmyra Atoll to find out.

Palmyra sits 1,000 miles south of Hawai‛i. The Nature Conservancy purchased Palmyra in 2000 in order to save it. Others had tried to buy it to convert to a nuclear waste dump, a rocket launch pad, a retirement development, or a casino. Except for a brief stint during World War II when the US Navy used it as a troop transport station, Palmyra has essentially been free of people.

Palmyra's isolation has allowed it to escape most of the damage usually caused by human populations. It's free of the pollution, overfishing, development and nutrient runoff that damage most coasts today. Palmyra allows us to look back in time to see what a healthy ecosystem should really look like.

Just one example -- scientific studies show that sharks and other large predators comprise more than half of the fish biomass at Palmyra. (See this amazing footage from my dive -- any experienced diver will confirm that this is a very large number of sharks). This is a much bigger proportion of apex predators than scientists had expected. Knowing this is important as we train managers of marine protected areas around the world and they seek to restore fisheries. We need to inspire them to aim very high.

Palmyra is also a good laboratory for studying the impacts of climate change on marine systems. Sadly, we know that, all over the world, climate change is bleaching and killing coral reefs. Even at pristine Palmyra, corals have been bleached by events like El Niño. But on Palmyra, the bleached corals recover quickly instead of dying, or new corals settle in to take the place of those that didn't survive.

Likewise, climate change dramatically increases ocean acidification. This is a very big deal, of course, because acidification makes corals brittle and weak. This reduces their ability to grow, reproduce and resist disease. But here again Palmyra's corals show much less disease. They grow and reproduce much more quickly than corals around developed areas.

The lesson seems to be that if pollution and over-fishing are kept to a minimum, corals are stronger and much more resilient than previously thought. 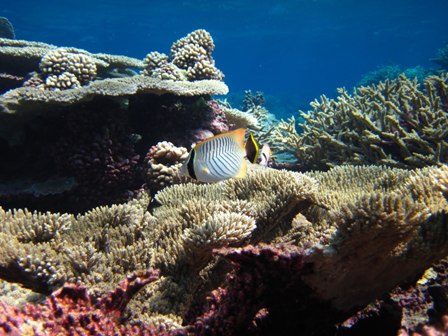 This is good news for a number of reasons. It shows there is hope. If we can constrain pollution and over-fishing, coral reefs have a fighting chance.

Coral reefs harbor 25 percent of all marine fish species. They not only provide food and livelihoods to some 500 million people, they are also used in the treatment of cancer, HIV, cardiovascular diseases and ulcers. They protect our shorelines. Healthy coral reefs are essential to people around our planet.

There is a lot to worry about here. Coral reefs around the world are under attack and are very vulnerable. But the research at Palmyra demonstrates that we can take action now and do something about it. If we reduce pollution, curtail agricultural run-off and develop sustainable fishing practices, corals will have a much better chance of surviving.