All in all, I'd have to say I'm a pretty good athlete.

But if you ever saw me on a paddle board, you sure as hell wouldn't think so. I love to go out in the early morning in the Santa Monica Bay spending most of my time trying to stand up on the damn board, and then after about five seconds, flopping in the water.

And then I pull myself back up on the board. And then after doing that about a dozen times, that's plenty of exercise -- so I just spend the rest of the time exhausted lying on the board floating around just thinking about stuff. Nothing wrong with that if you ask me.

Like what's 10 feet south of your board looking up at you. 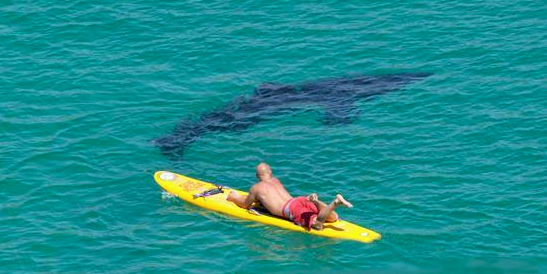 And then I start hearing that John Williams score.

And then I look around and realize how far I drifted out in the food chain in the deep blue sea, and how nobody can even see me anymore.

I peak over the side, and the water is so calm and clear I can see the bottom -- hoping to God not to look down and see some huge-ass uninvited guest to my pool party for one that thinks I look yummy.

I tuck my fingers up on the paddle board right about then. It's deathly quiet. Even though I'm lying flat on that board and there's not a wave in the damn ocean, I'm thinking it's tipping. I'm thinking I'm going to be looking in his mouth like I'm a dentist, only my whole head's going to be in his mouth.

It's now only time before I'm a gonner. I'm a ticking frigging clock.

It doesn't matter if I can see him. I know he's there. I can feel him in that water circling below me ready to pop up on that board. He's toying with me. He's hates me. He's loving that's he's just prolonging the inevitable.

My life flashes before me. I start thinking about fishing as a kid with my brother and Dad in a crappy old rowboat in Dewey Lake, a lake in the belly button of Michigan the size of a stamp -- catching fish smaller than my fingers. 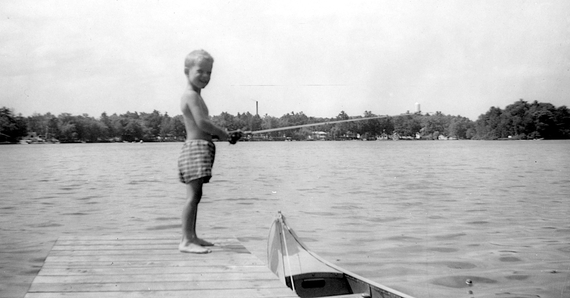 I'm remembering my Dad making us shove a hook in a live worm (that must have felt like a damn hatchet to that worm), and my Dad comforting my brother and me with his big old Irish grin in his Cubs hat saying, "Don't worry, it doesn't hurt the worm."

And I'm remembering pulling a dinky, squirmy fish in the boat with a hook jammed through his lip -- and my Dad smiling, "Don't worry, it doesn't hurt the fish."

So as I'm floating around in the Pacific, hearing that damn Jaws theme, waiting for that shark to snack on one of my thighs -- I wondering if he'll think, "Don't worry, it doesn't hurt the human."