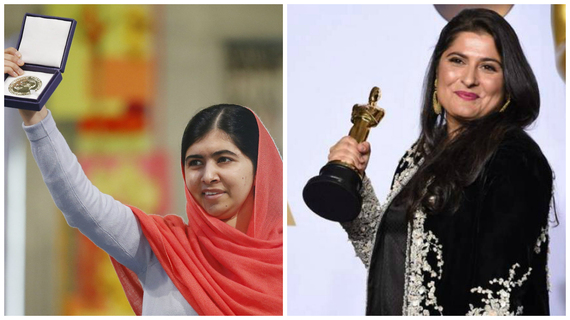 Sharmeen Obaid Chinoy is a celebrated Pakistani film director who has made two Oscar winning documentaries. Both her documentaries are focused on gender issues in Pakistan. First documentary ( which won Oscar in 2012) titled as "Saving Face" highlighted the issue of acid attacks on women while the most recent one titled as "A Girl in the River: The Price of Forgiveness" threw light on the menace of honor killing.

Considering the fact, that most of the time Pakistan is in the news for very wrong reasons, her latest Oscar, which she won on 28th February 2016 should have brought delight and sense of national pride to the ordinary Pakistanis.

However, immediately after her win, the reaction on social media hardly showed any sense of pride. While some celebrities did congratulate her, many of the Pakistanis were actually cursing her for "maligning" Pakistan's image in the international arena. Some accused her of trying to score brownie points from the West by deliberately painting a negative and "wrong" image of Pakistan.

The negative reaction which she has faced though disturbing is still dwarfed by what Pakistan's Nobel laureate, Malala Yousaf Zai, has so far received. Many ordinary Pakistanis hate Malala despite the fact that she nearly lost her life. She has been called a conspiracy of the West against Pakistan with the intent of defaming it.

What is wrong with Pakistanis here? Some think that hatred for Malala and Sharmeen is due to overwhelming misogyny which permeates the society. I agree that misogyny is one of the reasons but I do not think this is the sole reason or even the major one. I have seen similar reactions from some even highly educated Pakistani women.

The major reason is pretty obvious: Pakistanis are desperate for positive image in the international arena and they think that people like Malala and Sharmeen are not presenting "true" image of Pakistan. The fact that they get a lot of coverage from the western media accentuates the negative image problem.

To some extent their concerns are natural. With the rise of the nation state, our collective self-identity also has a strong component of nationalism and due to power of international media positive image increasingly matters a lot.

While their yearning for projection of a positive image of Pakistan is understandable, they are sadly mistaken in their assumption that people like Malala and Sharmeen are responsible for the current negative image in the global arena. Pakistan's negative image is not because Sharmeen has made movies highlighting the plight of women in Pakistan , but because of the way women are treated here.

Sharmeen's work is mostly about gender and the reality is that Pakistan fares extremely poor in global gender indicators. In 2015, Pakistan ranked as second last in Global Gender Gap Index well below several countries with similar level of economic development. Her work is merely highlighting a grave issue, she is not creating it. In fact if anything she is making the world realize that there are people in Pakistan who instead of being in denial are candid enough to not only acknowledge such problems but also take concrete steps towards addressing them.

Likewise, Malala is a little girl who nearly died at the hands of monsters. She is in fact a symbol of ultimate bravery. The attempt on her life highlighted the depth of Taliban's reach and ruthlessness. Her sole "fault" is that her story got too much attention from the western media.

Many Pakistanis simply saw the media coverage as kind of a ploy to insult their country. Ironically, in the beginning, there was a wave of sympathy for her and revulsion for the act of TTP. However, the moment Western media started its glorification of Malala, some who had initially praised her quickly changed their opinion.

A large number of Pakistanis became defensive and started to accuse Malala for bringing a "bad name" to their country. The conspiracy theory mindset which has always tried to shift the blame to the external world went into overdrive calling the entire episode a "conspiracy"' against Pakistan. With every minute of increasing fame, the opponents retaliated with charges of Western hypocrisy of highlighting just Islamic extremism while glossing over its own wrongdoings.

Needless to say all these haters never bothered to look towards the real reason which was that she was shot by extremists. It is ironical that rather than hating the extremists who were guilty of that and countless other inhuman acts, many Pakistanis have ended up hating the victim. The reason Pakistan got bad coverage was not because of Malala but due to those monsters that shot her. If anything by showing such reaction, we as a nation are showing our own shallowness.

As a nation, we need a lot of self-reflection and understand that today we are in the negative spotlight due to the way religious extremism has permeated our society resulting in tolerance towards women and minorities. We need to understand that Pakistan's image won't improve till we address the real reasons. Blaming Sharmeen and Malala is completely wrong and in fact shows that we are in complete denial.