Sharon Hayes's new body of work, entitled, "There's so much I want to say to you," recently opened at the Whitney Museum of Art. This is her largest museum installation to date, and features political pieces which explore the idea of dissent; the artist collaborated with Andrea Geyer on the site-specific work. To learn more, we sat down with the artist at the Whitney and asked her about her history and process. Scroll down for images. 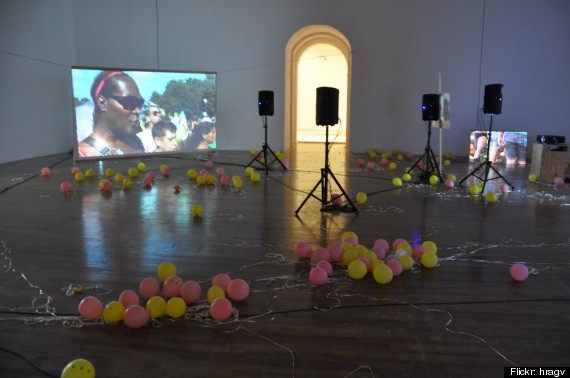 View of Sharon Hayes, “Revolutionary Love: I Am Your Worst Fear, I Am Your Best Fantasy” (2008)

HP: How did you begin collaborating with Andrea Geyer on this particular project?

In this case, I got together with her in a studio visit and was brainstorming some things I was trying to think about in terms of the show. How do you move from nonprofit art spaces to a museum? For me the most important aspect of that move is what an audience expects when they walk in that door.

HP: So what are the expectations of a Whitney audience?

I think there’s something where a museum by its nature legitimizes a work, validates a work, but that very validation closes something else off -- by that I mean it makes all work seem more resolved than it might be.

Yeah. Like, okay, this is it. This is somebody’s statement. Whereas I think in other moments the work can be a little more vulnerable. The dialogue is closer, it can be a little more intimate. This may sound funny, but I think the task was to provide a way, a context, a space in which audience viewers could be addressed by the work and intimately addressed – and I don’t mean emotionally specifically, but also body to work. The reason I say that might seem strange is when you see the show in some ways it’s immensely open – there’s no sheetrock walls at all. There’s no bifurcated rooms, so in a way you’re confronted with this overwhelming… but what this structure space that Andrea and I made together does is allows you as a viewer to be activated, to not necessarily demand that the work is concrete, delineated, resolved, done. But it’s not to have the work be done, but to be there with you in the present moment. It’s not over. It wasn’t done and placed in front of you and already past – it encounters you and it’s a live conversation.

HP: Has there ever been a time that the conversation has been closed, or do you always strive for this connection?

HP: You’re going to hate this one: Is the personal always political?

Yes, I think so. I can also answer it more complexly to say the two political conditions I’m most deeply informed by as a person and therefore as an artist is feminism and a lived experience of the AIDS crisis. I wasn’t on the front lines of the AIDS crisis because I came to New York in ’91, so the middle of the crisis, and I was only 21, so it was people 8, 9, 10 years older than I was and their community was decimated. I was experiencing this moment as a 20 year old where you’re so eager to absorb everything – theater, dance, lectures, concerts – and then there were all these political performances and funerals where people were in some ways rageful privately and publicly, and that was deeply impactful. I think it’s impossible to separate the personal/private from the public or the personal from the political – I don’t think those things can be separated. This doesn’t mean we can’t have private moments that we shelter from other concerns, certainly.

HP: What was it like moving to New York at this time?

The thing that was so intense was that it really seeped into every aspect of life in the city; it has to do with living in a besieged city. It doesn’t have to do with AIDS, it could be a war, or Cairo now and the last year and certainly Tunisia, but to live in a moment where things are happening beyond people’s control and to ask them to step out of everyday life, to step out of life as it has been, and I didn’t know it until later that I was actually learning from people who were just learning themselves how to deal with it. I moved to a place and a moment where it was a whole set of conditions and reactions to those conditions that we being practiced, made, learned, done in the moment.

HP: What kind of politics are you interested in during this age of marriage equality?

The queer politics that I’m interested in is where see ourselves as multi-issue, across a number of continuums -– of gender, of class, of practice or behavior -– and there’s more to be staked out beyond this category of rights. There’s also the desire and importance of being able to live as one wants to live. To have access to education or housing or food or entry into a bathroom for your gender expression. I’m not someone who has been invested in the marriage equality battle. I’m invested in another set of collaborative and relational politics. There is something that gay liberation practiced at the very beginning, which was so important, which is the power and potency of resisting normative regulations.

"There's so much I want to say to you" runs from June 21–September 9, 2012 at the Whitney Museum of American Art in New York.