The following is an excerpt from Looking at Mindfulness, in which author Christophe Andre explores how viewing art or reading poetry can help achieve a sense of calm.

Calm, attentive eyes in an attractive, quietly intelligent face, expressing neither benevolence nor hostility, just a desire to understand correctly and in detail. This is Thomas More, amazingly alive in this vibrant portrait painted five hundred years ago. An eternity. This painting by Hans Holbein, who was his friend, emphasizes More’s sharpness of mind and his ability at once to engage and step back. He was one of the world’s movers and shakers, an important, powerful person -- look at his rich attire and the gold chain attesting to his services to his king. He holds a small piece of paper, perhaps as a sign of his intense intellectual activity. He was also a brave humanist of great integrity, a reformer and visionary, the author of the famous book Utopia and a friend of the great philosopher Erasmus. He was an affectionate, attentive father, an unusual thing in his day. In a letter to his daughter Margaret he wrote, “For I assure you that, rather than allow my children to be idle and slothful, I would make a sacrifice of wealth, and bid adieu to other cares and business to attend to my children and my family, amongst whom none is more dear to me than yourself, my beloved daughter.” Until her dying day Margaret preserved her father’s decapitated head. 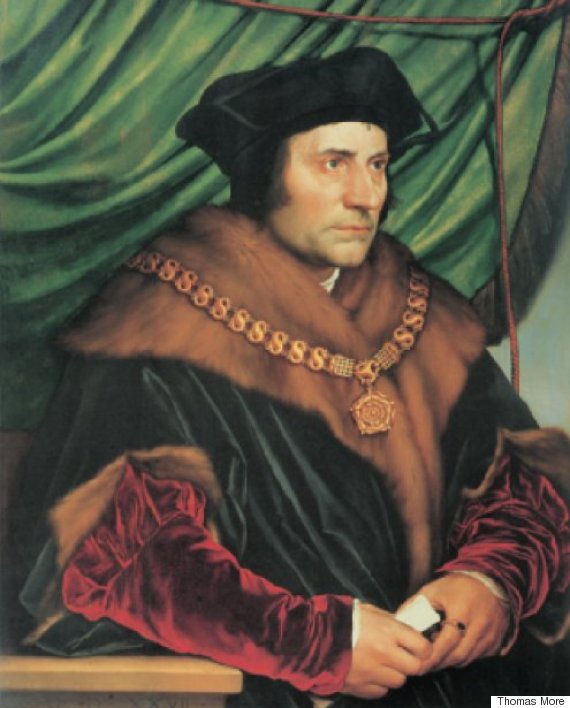 Because, having been a great statesman, More was sentenced to death for his opposition to King Henry VIII of England, a tyrannical ogre who ate only meat and changed his wife as readily as he changed his shirt. Look carefully at his face—see how his left eye is soft with compassion, his right eye sharp with attention. May we all be like Thomas More, always capable of both.

If you are a poet, you will see clearly
that there is a cloud floating in this sheet of paper.
Without a cloud, there will be no rain;
without rain, the trees cannot grow:
and without trees, we cannot make paper.
The cloud is essential for the paper to exist.
If the cloud is not here, the sheet of paper cannot
be here either.

Meditative intelligence
Pascal used to say that there were “two excesses: excluding reason and accepting reason alone.” Reason and meditation go well together. The latter allows the former to range more widely. Mindful meditation does not soften the mind, it is not passive contemplation. On the contrary, it feeds our intelligence.

Exerting our intelligence means making connections, linking ideas and concepts and coming to conclusions or decisions as a result. But it also means seeing that these connections can or do exist. So being intelligent means starting by observing what is, rather than trying from the outset to impose our presence on reality. Intelligence is first of all connecting with the world, before linking its different elements and developing rules and laws from them.

This connection between the world and ourselves lies at the heart of mindfulness, the practice of which is at once a laboratory, where we can observe the workings of our mind (we can talk of a “science of the self ”), and a gym, where we train it to acquire certain qualities -- capacities for reflection, concentration, resistance to distraction, creativity and mental flexibility.

For example, mindfulness facilitates what psychologists call accommodation. The notions of assimilation and accommodation were identifi ed by the Swiss psychologist Jean Piaget. They describe the way that our mind integrates potential contradictions between the world and our vision of it. So, if an element of reality contradicts one of my beliefs, I can assimilate (distort reality to make it fi t my beliefs) or accommodate (modify my belief to integrate the reality).

Here’s an example. I think someone I know is selfish (belief) and then one day I see them behave altruistically toward me (reality). I can assimilate -- not changing my judgment of this person and explaining their behavior by thinking they are acting in a calculated way. But I can also accommodate, thinking they are also capable of generous behavior and, if not radically altering my judgment of them, at least softening it, or suspending it temporarily (“I’ll wait and see what happens next before deciding what to think”).

It’s easier and more comfortable to assimilate than to accommodate, because assimilation does not require any psychological effort or challenge to our beliefs; it simply lubricates our mental reflexes, but clearly it does so by impeding our ability to free ourselves from our beliefs and develop our opinions and judgments. An increased ability to accommodate is one of the benefits of mindfulness. It is a consequence of mental attitudes such as acceptance and nonjudgment and, crucially, their regular practice by means of exercises. For practice is what makes the difference between a position held in principle and its day-to-day application.

Freud said, “Conflict is not abolished by giving one [tendency] the victory over its opponent.” Mindfulness can teach us not to want the victory of any of our ways of understanding or seeing the world, but to give them room within us in all their wealth and complexity.

Become calmer and understand the world better
Another benefit of mindfulness is calm, which is also very useful to intelligence. The intelligence of people who are irritated or excited can at times be dimmed to an astounding degree. Their emotions do give them power and energy, but of course they also affect their lucidity, causing these people to suffer extraordinary and recurrent failures of insight. The chaotic tumult in our mind reduces our free will, making it a slave to our emotions, in other words to circumstance.

In this regard it’s interesting to note that Buddhist meditation, in which mindfulness has its origins, follows two paths. One is shamatha, the calming of the mind, the other vipassana, translated variously as “seeing deeply,” “clear-seeing” or insight. The first path is necessary to allow the second to be exercised in full. An agitated, fragmented mind cannot look on the world with lucidity. It remains caught in a representation of the world, rather than being in the world. Its intelligence is thus, literally, blinkered -- limited and restricted. What use is that?

Mindfulness helps us not to be content with the “mirage of reality.” Insight enables us to probe into the nature of things, to avoid being misled by appearances. The philosopher Simone Weil wrote, “Intelligence has nothing to discover, it has only to clear the ground.” We often have to clear our minds of all that impedes a clear, detailed vision of the world, which will then emerge of itself, as something obvious. For Buddhist thinkers the quest for insight is not a theoretical or philosophical question. The way that we see and understand reality strongly influences our well-being and, if it is inadequate, causes much of our suffering and that of the world. Many fundamental concepts are grounded in this search for clear-sightedness. The most important include interdependence, emptiness and impermanence.

Interdependence, emptiness and impermanence
The interdependence of everything reminds us that nothing on earth has absolute existence as a fixed, isolated entity. I don’t exist as an autonomous subject, independent of my environment. I owe my life and its continuation to an infinite number of other people, along with many other natural phenomena. The acts and judgments I call mine -- “my” acts and “my” judgments -- and which seem to me to stem from my own will, are in reality determined by many other factors. But these relationships of dependence are also relationships of interdependence -- “I” am at once the endpoint and the starting point for impulses and initiatives that, in turn, influence the world around me. As long as I have not understood -- and, crucially, fully recognized -- all these relationships of interdependence, as long as I have not joyfully accepted them, I will be unable to see things clearly and will regularly fall into the traps of ego, pride and suffering. Accepting them, on the other hand, will not make me fatalistic, but will teach me humility in relation to my own undertakings and beliefs.

Emptiness is the second of these great Buddhist concepts, and perhaps gives rise to the greatest number of misunderstandings. The “emptiness of everything” does not mean that nothing really exists. It simply means that what we see has no concrete, solid existence. We can use a rainbow to illustrate this idea. The rainbow’s existence depends on my position, that of the sun, and the assistance of passing clouds. It exists for me, but not for other human beings in different places. The same is true of the great bitterness I may feel toward someone who has said something nasty about me -- it’s real enough, I can feel it filling my body and mind. But if I find out that the dreadful thing I’d heard about was in fact never said, and that the person had actually been very complimentary about me, what happens to all that fearsomely solid bitterness of the moment before? It vanishes in an instant. The emptiness of a phenomenon or thing is not describing its nonexistence or absence, but its nature as something unstable, shifting, subjective and complex. This is what emptiness is -- an awareness of the complexity of everything. And its consequence is caution before we allow ourselves to be carried away and start clinging to the “mirage of reality.” Though it may initially make us feel insecure, even depressed, the idea of emptiness -- and crucially our experience of it during meditation -- gradually becomes illuminating and almost joyful, in the same way as interdependence.

And then there’s impermanence, which teaches us that nothing lasts forever and that everything that happens is a matter of composition and decomposition, organization and disorganization, all of it transitory and ephemeral. There’s nothing distressing about this either -- on the contrary, it is illuminating and liberating.

As Paul Valéry observed, “The mind flits from one silliness to the next, as a bird flits from branch to branch. It can do nothing else. The main thing is not to feel stable on any one of them.” Our minds need transitory certainties, just as birds need branches. But if we test them against interdependence, emptiness and impermanence, we will suffer less, and cause others less suffering too.

Reprinted from LOOKING AT MINDFULNESS by Christophe André (translated by Trista Selous) with permission of Blue Rider Press, a division of Penguin Random House LLC. Copyright © 2011 by L’Iconoclaste, translation copyright © 2014 by Rider Books