Sven and Jack are two hearty loggers. One day, Jack challenges Sven: who can hand cut the most trees in a single day? Sven, sure of himself, accepts the challenge.

The rules are simple: each gets one saw to fall the most trees by the end of the day. The winner gets a gourmet lunch prepared by the other for a whole week.

When the whistle blows to start the competition, Jack picks up his saw and gets right to work. Sven takes a different route. Instead of hustling to his first tree, he pulls out his sharpening kit, sits down with his back against a stump, and spends 45-minutes honing the several hundred serrated edges on his trusty tool.

The other loggers taunt Sven. "What are you wasting so much time for? Hope you like wearing a chef's hat!"

But Sven knows better. He knows the 45 minutes look like wasted time, but they'll actually translate into many more minutes in productive tree-cutting.

When Sven finally starts, Jack is several trees ahead of him. But he's also tired. The dull saw is overworking him, and he's slowing down. Sven, however, rips through tree after tree. His razor-sharp saw falls them effortlessly.

By early afternoon, Jack has given up. He's hunched over, exhausted. Sven blows past him, falling trees well into the evening and, at the end of the day, stands tall looking over his accomplishment without so much as a heavy breath. [1]

To Be Your Most Productive, Sharpen Your Saw With Exercise 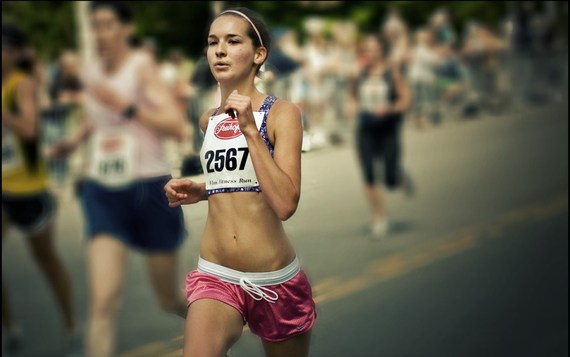 The reason Sven chose to sharpen his saw rather than jump right into the trees is the same reason many of the most successful and productive people on Earth also are morning runners.

Bill Gates, Oprah, Richard Branson. They've all revealed that, though they're incredibly busy, they go for a run each morning before jumping into work. Why do they make this a priority when the demands on their time are so great? Do they want to be all-star athletes? No. They do it because exercise helps them be their best.

I've discovered this myself. Before becoming a runner six years ago, I was ready for bed by 2:00pm on a busy work day. Considering the popularity of coffee and other ridiculous energy drinks, it seems I'm not the only one.

But after a few weeks of my morning running routine, something changed. My mind was clearer and I felt more alive. Most notable, though? Difficult problems started getting easier to solve, I could work faster, and I didn't get tired midday. The only thing that could take me down was a massive lunch (which I quickly learned to stop eating).

Just like Sven, I learned I could significantly increase my energy and productivity by "sharpening my saw" with a morning running routine before I started work.

It's not just me, though. In 2014, three medical researchers conducted a randomized, controlled trial testing the effects of aerobic exercise for people with a sedentary lifestyle. Through several different tests, they learned even a little light exercise improved feelings of energy. [2] And some preliminary research on mice has shown exercise might slow the aging of the brain. [3]

If you want the benefit of better energy and a sharper mind, the research says you just need to get a bit of aerobic exercise. Take a little time, every day, to sharpen your saw. If it feels like you don't have time, remind yourself it's the exact opposite that's true.

Need to find the right exercise for you? I have a strategy for that, too.

Sources/Notes:
1. Thanks to Riskology reader, Josh, for pointing me to The Seven Habits of Highly Effective People by Stephen Covey, which introduced me to the concept of "sharpening the saw."
2. A randomized controlled trial of the effect of aerobic exercise training on feelings of energy and fatigue in sedentary young adults with persistent fatigue.
3. Exercise enhances the proliferation of neural stem cells and neurite growth and survival of neuronal progenitor cells in dentate gyrus of middle-aged mice